How it Works: Building Loads

A house is more than an assembly of studs, joists, and rafters clad in materials like drywall, tile, paint, carpet, concrete, and asphalt shingles. When built well, a house protects its inhabitants from relentless physical forces.

It is important, then, before sinking a nail into the first piece of framing lumber, to understand how a house frame performs. To begin, you need to know what a building load is. Here’s how it works.

Understanding loads improves framing and design skills
A building load is simply a force that a house frame needs to resist. The frame must be designed to withstand eight of these loads—which include wind, earth, and snow—without catastrophic stress on the structure. While not every load consideration is applicable to every geographic region, or even every home within a region, having a collective understanding of building loads will strengthen your view of framing as a general system. That’s an asset when designing, building, or remodeling any home, anywhere. 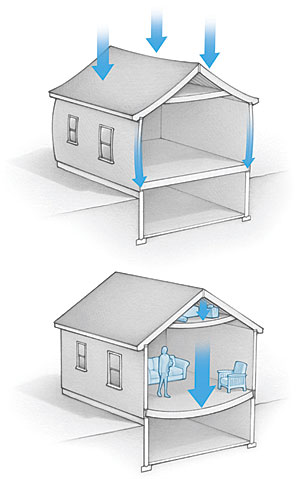 What it means: Dead loads are the forces incurred due to the weight of all the materials used in the construction of a home. Dead loads can vary greatly depending on the type of construction and the interior finishes. For example, carpet, sheet vinyl, trussed roofs, 25-year shingles, and vinyl siding are relatively light in weight. Tiled floors, suspended concrete slabs, 40-year shingles, built-in cabinetry, granite counters, plaster walls, fiber-cement siding, and veneered masonry are relatively heavy.
What it affects: Dead loads have an effect on all structural members of a house. The loads are a constant over the life of the structure, and they have a big impact on the long-term deflection or creep of framing members.

The load: Live
What it means: Live loads are produced by the users of a home. These loads include the weight of people, their furniture, and their storage items. A live load is most applicable to floors, but it can apply to roofs during repair projects due to the weight of workers and their materials.
What it affects: Live loads exert force on almost all of a house’s framing components. The goal is to design floor systems that limit deflection and vibration. 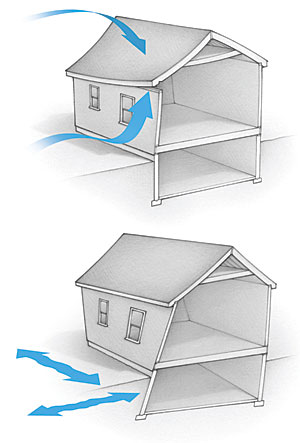 What it means: Wind loads are the positive or negative pressures exerted on a house when it obstructs the flow of moving air. Wind loads generally act perpendicular to the surfaces of the house.
What it affects: The significance of the load varies depending on the geographic location of the house, its height, and its roof pitch. Wind loads have the most significant impact on roof framing, overhangs, and large openings, especially those near building corners. On a larger scale, shear-resisting elements, like the roof, floor framing, and sheathed wall segments (shear walls), are affected by wind loads.

What it means: Seismic loads are the inertial forces acting on a house due to earthquake-induced ground motions. These forces generally act horizontally on each element of the structure and are proportional to their mass. As such, heavier houses are more susceptible to seismic loads.
What it affects: While all components of a frame feel the effect of seismic loads, shear-resisting elements (see wind loads) that provide stability are most affected. 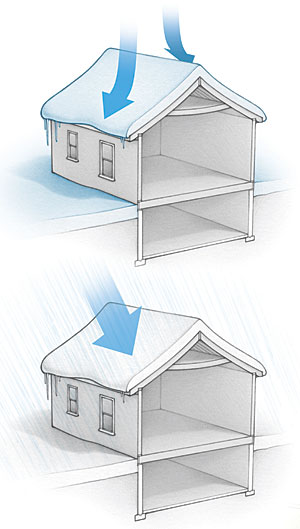 What it means: Snow load is the weight of snow uniformly distributed on the roof or piled into drifts. Snow that slides from an upper roof onto a lower roof also can add significantly to snow load.
What it affects: Roof and wall framing is generally responsible for resisting snow loads. Floor joists and girders also may be affected depending on the framing configuration.

What it means: Rain load is the weight of rainwater that accumulates on a roof. This type of load is typically an issue only on very low-slope roofs. Rain also can add to snow loads on low-slope roofs.
What it affects: The framing members that support snow loads also resist the forces of rain loads. 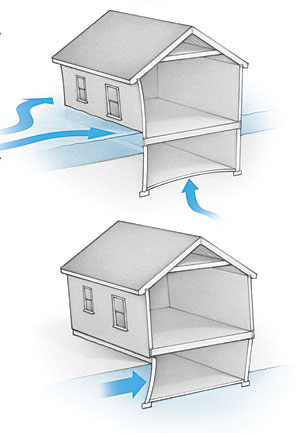 What it means: Flood load is the pressure exerted on a house when it obstructs the flow of moving water.
What it affects: Foundations must be designed adequately to resist these forces as well as impact forces from moving debris. Also included are hydrostatic loads due to the difference in elevation between the water inside and outside the structure. This also can cause uplift on slabs and floor systems.

What it means: Earth load is the lateral pressure on the foundation wall due to the height of the backfill.
What it affects: Foundation walls and their attachment to mudsills and floor joists must be designed properly to withstand this load. Floor diaphragms and lower-level shear walls also are affected; they must resist racking due to the overall pressure of the earth on the structure.