How to Wire an Instagram-Worthy Electrical Subpanel

Neatness counts, both for impressing clients and for future service.

California electrician CJ Nielsen’s electrical work could probably be featured in an art museum—not with the abstract expressionists, but wherever it is that they keep the ideal representations of real-world objects (next to, I imagine, a Maloof chair).

But for the time being, he’s still a working electrician, wiring up things that few people will ever see or appreciate. In his mind, that’s no excuse for doing a sloppy job. 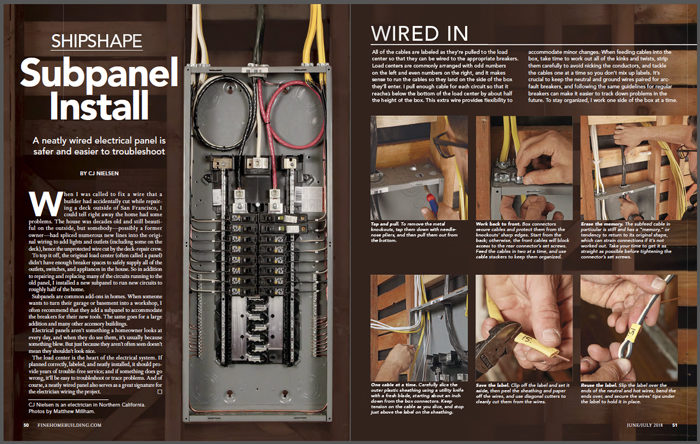 In this video, CJ demonstrates how to wire up a subpanel that looks so good, you won’t want to put a cover on it (though, if the inspector checks in, you’ll have to). The process is detailed in his article, “Shipshape Subpanel Install,” in FHB #276.

When installing electrical panels, it pays to do a neat job, if for no other reason than it makes it easier to find and fix problems in the future. It doesn’t hurt for getting referrals, either.

Start by numbering each cable as you pull it to the box, and make sure they hang on the side of the box they’ll enter (most panels have odd-numbered breaker spaces on the left, even numbers on the right). Pull enough cable for each circuit so that it reaches below the bottom of the panel by about half the height of the box. This extra wire will give you flexibility to make minor changes to the breaker layout.

Once the cables are pulled to the panel, remove the box knockouts. Tap them down with needle-nose pliers and pull them out from the bottom.

Then install box connectors to secure the cables to the box and protect them from the sharp edges of the knockouts. Feed the cables into the box two at a time, working out any kinks. The feed cable in particular has a “memory,” or a desire to return to its original shape, which will put strain on the box and connections if it’s not worked out before it’s connected to the panel.

CJ uses plastic cable stackers to keep the circuit cables neatly in the stud bay and in line with the connectors. After running each pair of wires into the box, secure them in the stacker. Here it’s mounted to a piece of 2×4 blocking to keep it centered in the wall.

To make it easier to keep track of everything, tack a couple screws or nails into the studs on either side of the box to hold the wires out of the way. Always work one side of the box at a time to help keep everything in order.

Once all the wires are in the box, use a utility knife with a fresh blade to carefully slice the outer plastic sheathing on the circuit cables. Start the cut about an inch down from the box connectors. Keep tension on the cable as you slice, and stop the cut just above the label on the sheathing. Clip off the label and set it aside, then peel off the sheathing and paper, and use diagonal cutters to cleanly cut this waste material from the wires.

Next, separate the uninsulated ground from the other wires. Take the label you just snipped off and slip it on the neutral and hot wires, and bend the wires’ ends over to hold the label in place. Repeat the process for all of the circuit cables.

Next, hook up the ground wires. Start by separating all of the paired neutrals and hots from the loose grounds. Take your time to untangle everything so that the grounds can be neatly pushed into the back corners of the box.

Most panels come with one ground bus bar. To keep things neat, CJ installs a second ground bus—one on each side of the box—so the grounds don’t have to cross from one side to another.

Going one wire at a time, use a finger to push the grounds into the back corner, and run your finger down the wire to straighten it out.

Hold your finger on the wire across from the bus bar location where you’re going to attach it, make a soft 90° bend, and cut the wire to length. About 1/8 in. of copper should stick through the other side of the bus. Leave the bottom-most space on each ground bus bar open for a jumper.

To strip the subfeed, lightly score a line starting about an inch below the connector and down to the end of the cable. At the end, you can cut all the way through since the ends will be trimmed off. Starting from the bottom, simply pull the sheathing away from the cables, and it should split right on the scored line. Use diagonal cutters to trim the sheathing away at the top.

Install a plastic insulating bushing onto the connector holding the feed cables, then separate out the feed’s ground wire, bend it to the right side of the box and down to the bus bar, and connect it to the ground bus bar the same as the other grounds, and zip tie them all together.

Before moving on, CJ connects the ground bus bars together with the cutoff from the subfeed’s ground wire. This connection isn’t required, since the ground buses are connected to the box, but it guarantees the grounds are tied together.

It’s always a good idea to leave some extra feed cable in the box to make future repairs easier. Electricians call this excess “service loops.” Take time to make the service loops neat and work out the cables’ memory so that they go into the lugs easily. Cables that are forced into the lugs are more likely to loosen over time, which could result in a fire.

Start with the neutral, looping it so that its end will fall squarely in the lug. Line the cable up with the lug to determine where to trim it, then cut at that mark with diagonal cutters. To strip the end, use a utility knife to score a line around the cable 1 in. from the end, and then down to the end from this line, being careful not to nick the conductors. Use diagonal cutters to split and peel the insulation.

Then insert the cable into its lug, leaving about 1/4 in. of copper exposed at the top so that you don’t pinch the insulation. Repeat the process for the two hot cables. When all the feed cables are in, zip-tie the service loops together so they stay neatly in the box.

At this point, all of the hots and neutrals are still paired up and labeled. Land the neutrals in order according to your breaker layout—CJ sketches his layout out on a piece of cardboard to keep next to the panel for reference. As you go, make sure the label for each circuit stays on the hot wire when you separate out the neutral to connect it.

Just like with the grounds, push the wire to the back corner of the box, run your finger down it until even with the space on the neutral bus where it’s going to land, hold your finger on the wire as a bending point, and bend a soft 90° with your other hand.

Use wire strippers or diagonals to trim the excess, strip about 1/2 in. of insulation from the end, and insert the wire into the neutral bus bar just far enough that a little copper shows out the other side. You can always cut the wire a little long and nip it back once it’s in the bus bar.

Pick a side, and land the hot wires in order from top to bottom. Use the same technique as before to straighten the wire, bend it, and cut it to length. Strip out about 1/2 in. of insulation, insert it into the breaker, and tighten it down. Once you’re done connecting all of the hots, zip-tie them together, then go back with a torque driver to make sure all of the connections are tightened properly.

When it’s all done, it should look something like the one CJ wired for “Shipshape Subpanel Install” in FHB #276. 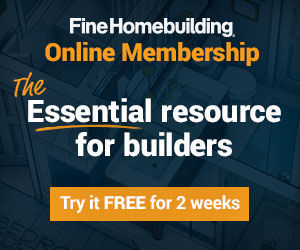 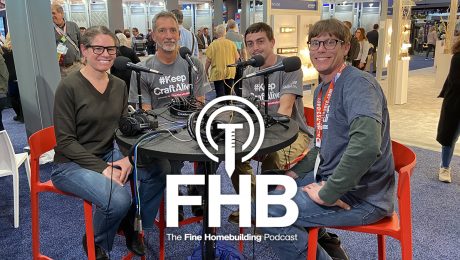 Mike and Addison discuss their experience at IBS and share some of the gear and products that caught their eye while walking the show floor.