Components of a House Frame

Here's a glossary of all the parts of the frame from mudsills to collar ties.

Before you frame a house, you need to know the parts of the frame and how they work. The following discussion roughly reflects the order in which the parts are built in the framing process.

Parts of the Frame 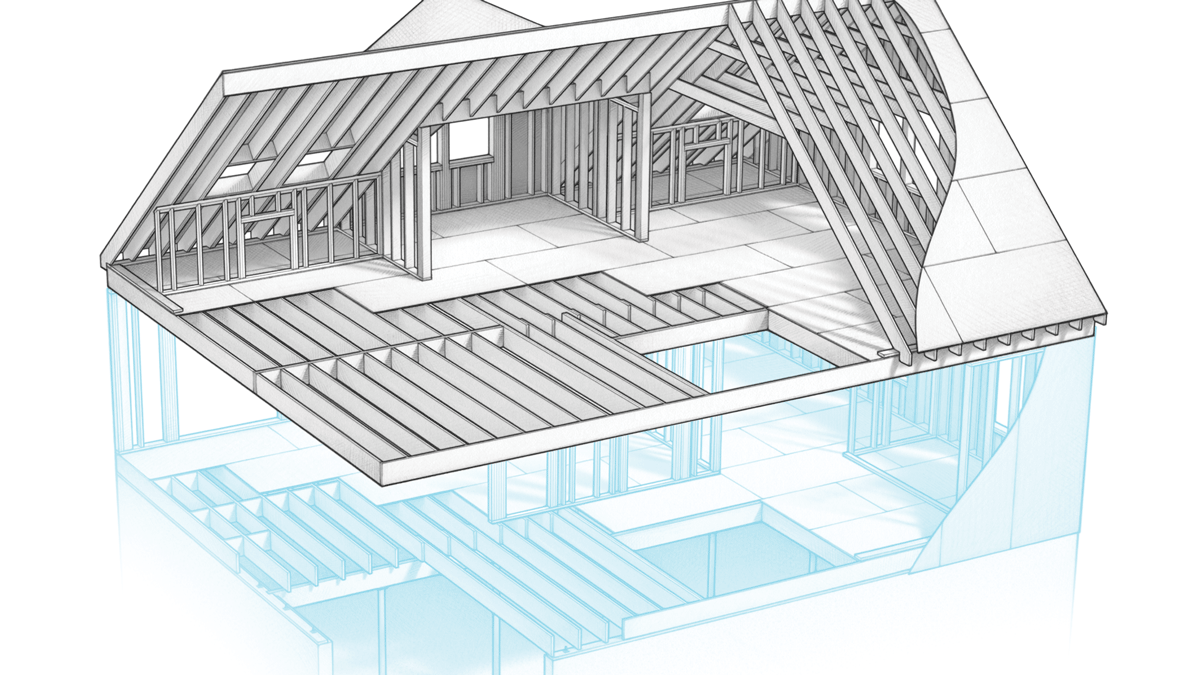 Pressure-treated lengths of 2×6 lumber, which form the first layer of the mudsill, are solidly attached to the foundation with bolts that have been embedded in the foundation walls. They provide a bearing surface that prevents contact between the untreated floor joists and the concrete foundation. A second layer of standard lumber is sometimes applied over the pressure-treated boards. That layer can be used to help level the mudsill, and the light-colored wood makes the layout marks easy to read. However, most mudsills are built with a single layer of pressure-treated lumber.

Some of the floor joists must be cut short to create openings for features such as stairs and chimneys. A floor header supports the ends of the interrupted joists. Headers are often made of two or more lengths of floor-joist stock sandwiched together but can also be made of manufactured material such as laminated veneer lumber (LVL), as in this house. To carry the extra load placed on them by the headers, the floor joists on either side of the opening must be doubled or tripled.

Building codes often require that short pieces of lumber, called blocking, be nailed between joists and rafters to reinforce or stiffen the floor or roof system. When blocks are installed in a row at the midspan of the joists and run the entire length of the building, they are called bridging. Blocking can also be installed between wall studs to make it easier to support such things as handrails, towel bars, and cabinets.

Floor sheathing is a layer of plywood or oriented-strand board (OSB) that is nailed and glued to the top edge of the floor joists. Floor sheathing stabilizes the joists and provides a solid, flat base for wall framing and finish flooring.

Exterior walls are framed with 2× material covered with sheathing and siding on the surface exposed to the weather. These walls are usually insulated.

Interior walls subdivide the inside space of the house, separating rooms and creating closets. These walls are not usually insulated.

Wall plates are the horizontal members at the top and bottom of each wall; they tie the ends of the studs together. The bottom plate is nailed through the floor sheathing and into the joists below. The top plate supports floor joists or ceiling joists. It is common practice to double the top plate in order to tie adjacent walls to each other and provide extra support for second-story floor joists.

The 2×4 or 2×6 vertical members of both exterior and interior walls are known as studs. They extend between the top and the bottom wall plates. Unlike other framing members, studs can be precut at the mill to one of several standard lengths and are generally installed without further cutting.

A corner assembly consists of two or three studs nailed together in an L shape to form a rigid corner where framed walls meet. The assembly also provides a stiff, solid nailing surface for attaching interior wall finishes.

A partition backer is an assembly of three studs nailed together into a U shape. When built into a wall, the backer creates a stiff column to which an intersecting wall can be attached. The legs of the U stiffen the backer stud and provide a nailing surface for interior wall finishes.

Openings in walls that accommodate windows or doors consist of several pieces of framing. The full-length studs on the sides of every opening in the wall are called king studs. The somewhat shorter studs that support the ends of a header are called trimmer studs or jack studs. They are nailed to king studs or to other jack studs. A header supports framing above and distributes loads to the jack studs on each side of the opening. The header fits on top of the jacks and between the king studs. A stool (also called a sill or saddle) is a horizontal member at the bottom of a window opening that fits between the jacks. Short framing members that fit under the stool or above the header are called cripple studs. Local building codes may require extra framing members around openings to stiffen them against high winds, as shown in the left photo below.

The layer of plywood or OSB that skins the exterior of the wall is called wall sheathing. It adds lateral strength to the wall system by tying the framing members together. It also serves as a nailing base for siding.

Ceiling joists are similar to floor joists, except that they do not support conditioned living space above. Their primary purpose is to provide a nailing surface for ceiling materials such as drywall. Because they don’t carry floor loads, ceiling joists do not need to be as wide as the floor joists, although they usually are. Ceiling joists can go between the rafters, or finish the top of a platform with rim joists around the perimeter.

Angled framing members that create the shape of the roof are called rafters. They support the weight of the roof sheathing and the roofing material and channel the loads to the exterior walls. The board that joins the ends of the rafters at the peak is called the ridge. It is often made of 2× lumber but can be made of other materials. A structural ridge is supported by posts and helps carry the weight of the roof. A nonstructural ridge does not carry roof weight. Both types of ridges provide a bearing surface for the ends of the rafters and tie them together. Rafters also provide a nailing surface for the roof sheathing.

The plywood or OSB skin that covers the rafters and joins them together is known as the roof sheathing.

Collar ties are horizontal members that join opposing rafters together. They stiffen the roof and can serve as ceiling joists when the attic is used as living space.

Previous: Evolution of the House Frame Next: Frame Engineering