Floor Framing Starts with the Mudsills

If you want to get the first-floor platform right, squaring and leveling the mudsills is a critical first step.

The most important part of a house frame is the first-floor deck: the mudsills, the beams that support the floor framing, and the floor frame itself, including the joists and sheathing. If you want the rest of the house to be level, square, and plumb, you’d better start with a square and level platform.

Before getting started, look over whatever plan shows the floor-framing details; they might be on the first-floor framing plan or, as in this case, on the foundation plan (see “First-Floor Framing Plan”). Make note of any special details, such as openings for stairs and chimneys, and look for areas marked for extra framing needed to carry heavy loads, such as large bath tubs. Pay particular attention to locations where the joists change direction or cantilever over the foundation walls to support a bay window or balcony. These areas are easy to overlook as framing progresses and, believe me, you’ll want to get them right the first time. Use a highlighter to flag these features so you’ll be sure to pay attention to them as framing progresses.

Over the years, I’ve been lucky to have worked for builders who were meticulous about getting the first-floor deck right, but I also spent a short time on a crew where speed trumped accuracy. Walls on the shoddy first-floor deck seemed to go up easily…until we tried to straighten and square the second floor. Walls had to be set out of plumb or off the layout to compensate for discrepancies in the first-floor deck. At the roof, the rafters didn’t meet the ridge squarely, and with the framing out of whack, every piece of fascia had to be custom cut to fit. Trimming out soffits and returns that weren’t square was an even bigger headache.

My advice: Take your time and get the first-floor framing as close to perfect as you can. Otherwise, you’ll have to spend extra time and money to fix problems later. Get this part right, and the house will be better for your efforts.

Mudsills (also known as sills or sill plates) are made of rot-resistant, pressure-treated wood and are bolted to the top of the foundation. Historically, however, mudsills literally sat in the dirt below the house. If you want to get floor framing right, squaring and leveling the mudsills is a critical first step.

The first step is to measure the foundation and give it a quick check for square. Don’t assume that your foundation contractor got it right, because even the best have bad days. To check a foundation for square, have two crew members stretch a 100-ft. tape diagonally from one corner to another, as shown in the photo above. Note the measurement and repeat the process at the other two corners. The numbers don’t have to match exactly but they should be less than 1 in. apart. If the difference is greater, you can sometimes compensate by installing a wider mudsill and letting it hang over the foundation slightly, but this arrangement is hardly ideal.

In addition to taking diagonal measurements, I also measure between the longest parallel walls of the foundation to make sure they are indeed parallel. It’s also a good idea to look for irregularities in the sides or top of the walls. If they bow outward, for example, you might have to position the mudsills so that the wall sheathing will clear the bowed area. If there’s a hump or belly in the top surface of the foundation, you may have to scribe or shim the mudsill. If you have a transit on site, check the top surface of the foundation in various locations to make sure it’s fairly level (see “Using a Transit”). If you don’t have a transit, you can use a water level—a long, clear length of plastic tubing filled with water—but it’s not nearly as quick and convenient as using a transit. A foundation should be within ⅜ in. of level. If it’s greater than that, one solution is to install a second mudsill over the first and shim it to level (see “Double-Layer Mudsills”).

Once you’ve established that the foundation is reasonably square and level, it’s time to mark out the exact location for the mudsills. The house shown here has 2×6 sills, so the first step is to measure 5½ in. (the actual width of a 2×6) inward from the outside face of the foundation. Make your measurements at each end of the longest wall and mark those points. Then snap a chalkline between the marks. This line will serve as the baseline from which all subsequent measurements will be taken. Snap the lines in nonpermanent blue chalk so you can adjust them later if necessary. 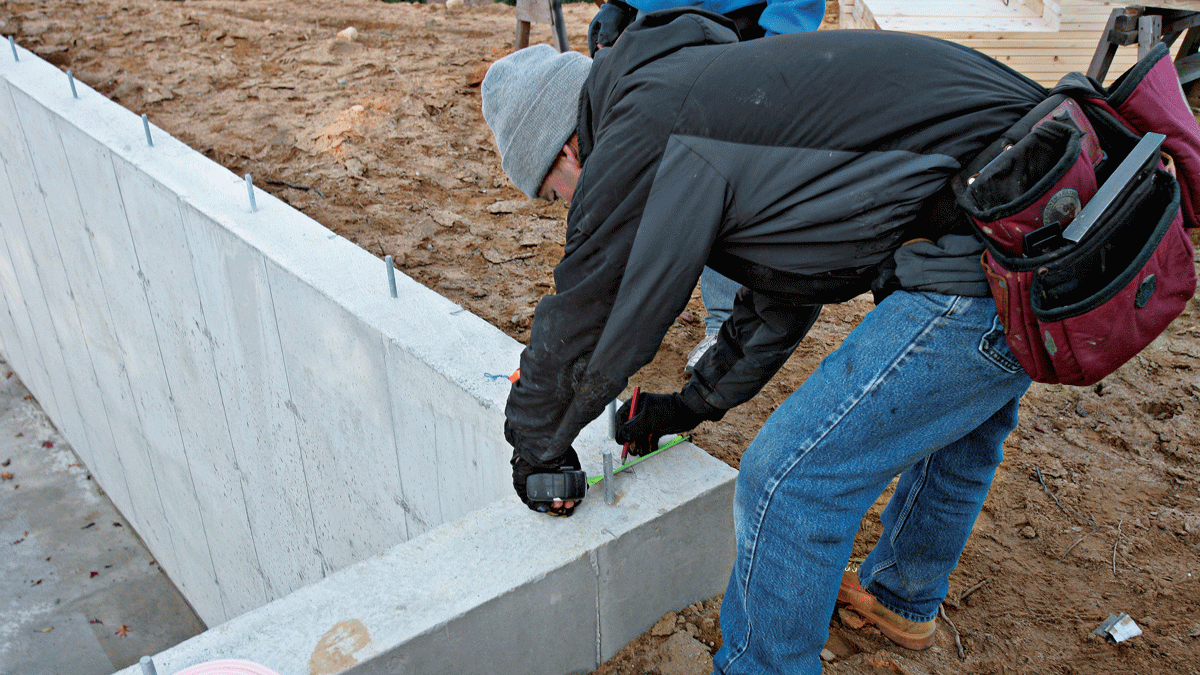 The next step is to mark perpendicular layout lines for the mudsills on the end walls. The most common method for establishing perpendicular lines uses the Pythagorean theorem (remember high school algebra?): A2 + B2 = C2. A triangle with those proportions always has one 90-degree angle. Carpenters refer to the simplest of these triangles as a 3-4-5 triangle because any multiple of those numbers yields a right triangle with an easily determined hypotenuse. Here’s the basic example: 32 + 42  = 52 (9 + 16 = 25). If you wanted to work with a slightly bigger triangle, 3-4-5 multiplied by three yields a triangle with a 9-ft. leg, a 12-ft. leg, and a 15-ft. hypotenuse. The larger the triangle, the more accurate the layout will be. Carpenters rely on 3-4-5 triangles to establish or verify perpendicular lines at many stages in the framing process. In practice, determine the length and position of one leg and the corner where you need the 90-degree angle, then figure out the length of the other leg and the hypotenuse. Piece of cake.

Here’s how it worked on this project. To lay out the mudsills, we measured 5½ in. along the baseline from one end and marked a point that represented the inside corner of the intersecting mudsills. Then we measured along the baseline 8 ft. (a multiple of 4) from that mark and made a second mark. From that point we measured diagonally exactly 10 ft. (a multiple of 5) toward the intersecting wall and jockeyed the tape back and forth until it matched the 6-ft. point (a multiple of 3) on a second tape stretched from the inside corner mark. We made a third mark at this intersection point. Finally, we snapped a chalkline from the baseline corner, through the third mark and all the way to the parallel foundation wall to establish the line for the perpendicular sill. 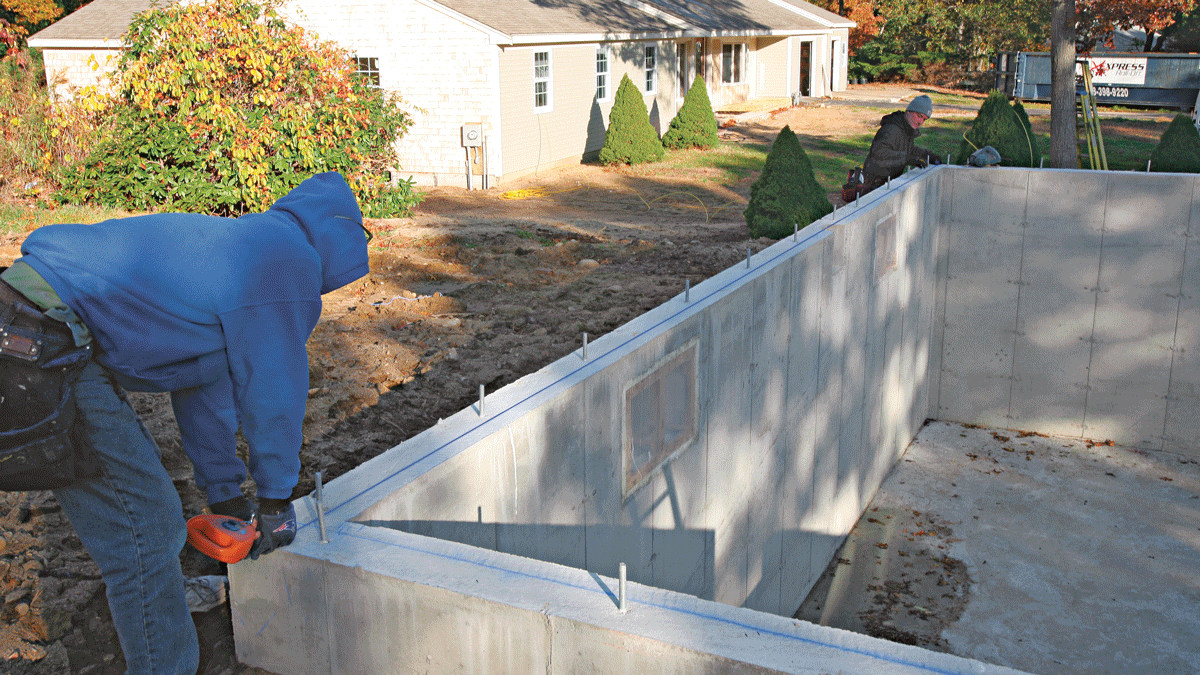 To locate the layout for the second perpendicular mudsill, we first measured in 5½ in. at the other end of the baseline and marked the other corner point. Then we measured the length between the baseline corners. Next we measured that same distance along the parallel mudsill from the corner just established and marked the final corner point. A chalkline snapped between the remaining corner points is the layout line for the second perpendicular wall.

As a final check, take diagonal measurements between corner points as you did when checking the foundation. At this point, the diagonals should be within ⅛ in. of each other. If they’re not, go back through the procedure and adjust layout until the diagonals match. If any changes are required, snap new chalklines in a different color chalk to avoid confusion. Once the layout for the house’s mudsills is complete, lines for the garage can be figured using the same simple geometry.

Once the sill layout is complete, you’re ready to cut and install the mudsills, a process that starts with the installation of sill sealer. This is a thin, flat insulating foam that plugs minor gaps and irregularities between the mudsills and the foundation to prevent cold air from leaking into the house. The usual installation method isn’t complex. You just roll out lengths of sill sealer and impale it on the anchor bolts. The inside edge of the stuff should be aligned with your chalklines.

With sill sealer in place, you can begin to cut the mudsills to length. You can take measurements directly from the lines on the foundation to determine the lengths of all the mudsill stock, but it’s actually faster and more accurate to cut and fit the boards one by one. Regardless of the method you choose, always make sure the ends of the mudsills are square so that the boards butt together nicely. When you get to a corner, let the board run past the edge of the foundation—it’s easier to cut the sill to length after it’s in place.

As each mudsill is cut to length, it must be drilled to fit over the foundation bolts. There are many ways to do this, so I’ll explain the method I see most often. Place a length of mudsill stock on the outside of the foundation wall, as close to the bolts as possible and parallel to the chalkline. Measure from the chalkline to the center of a bolt (see the drawing below). Then transfer that measurement to the mudsill, measuring from its inside edge, and make a mark. Now hook your square on the edge of the mudsill, with the corner lined up to the middle of the bolt, and draw a line to the mark. The intersection of the line and the mark is the center point for the bolt hole. When you’ve marked the bolt locations, drill a slightly oversize hole at each mark. The extra room will let you tweak the mudsill to fit perfectly along the layout line on the foundation.

After sliding the sill stock into place over the bolts, put a washer and nut on each one. This house was built in a high-wind zone, so code required large square washers to resist wind uplift. In most areas, though, standard round washers will suffice. If you’re over-zealous drilling the bolt holes, you can replace round washers with larger-diameter fender washers. Hand-tighten the nuts for now.

After all the sills are aligned with the chalklines, tighten each nut further with a wrench. If you opt to use an impact wrench, set the clutch at a fairly light tension so as not to overtighten the nuts. Too much tension can distort the mudsill, making it tough to build a flat and level floor. If using the large square washers, square them to the sill as you tighten the nuts to leave enough room for the rim joist. When the nuts are tight, go back and cut any sill stock that overhangs the foundation. As a final step, check the mudsills with diagonal measurements to make sure they are perfectly square.

Previous: Framing Floors and Stairs with Larry Haun Next: How to Air-Seal Mudsills