This roof shape may look complicated, but it's basically the same process as framing a common 45-degree bay-window roof.

The first time I saw an octagonal turret on a set of plans, I cringed. I knew that if I tried to fake my way through framing it with strings and T-bevels, I would lose money in both labor and material, so I decided to do some research first. After looking through a couple of old timber-framing books at the library (this was before the internet), I discovered that it wasn’t that difficult to understand. In fact, the octagonal turret is simply a continuation of a 45° bay-window roof, which I had successfully built many times.

Since then, I haven’t really changed my basic approach to framing an octagonal turret, but I have streamlined a few procedures that eliminate the cringe factor. First, I figure out the framing dimensions with a calculator. Then I cut all the parts and assemble the roof on the deck, next to its intended location.

In this example, the octagon segments are 4 ft. long and combine to create a base width of 9 ft. 7-7⁄8-in. A total of eight common and eight hip rafters make a roof with a 20-in-12 pitch. Due to the turret’s location, only half of the rafters are extended into tails that form the soffit. The rafters on the roof side of the turret are cut flush with the plate. 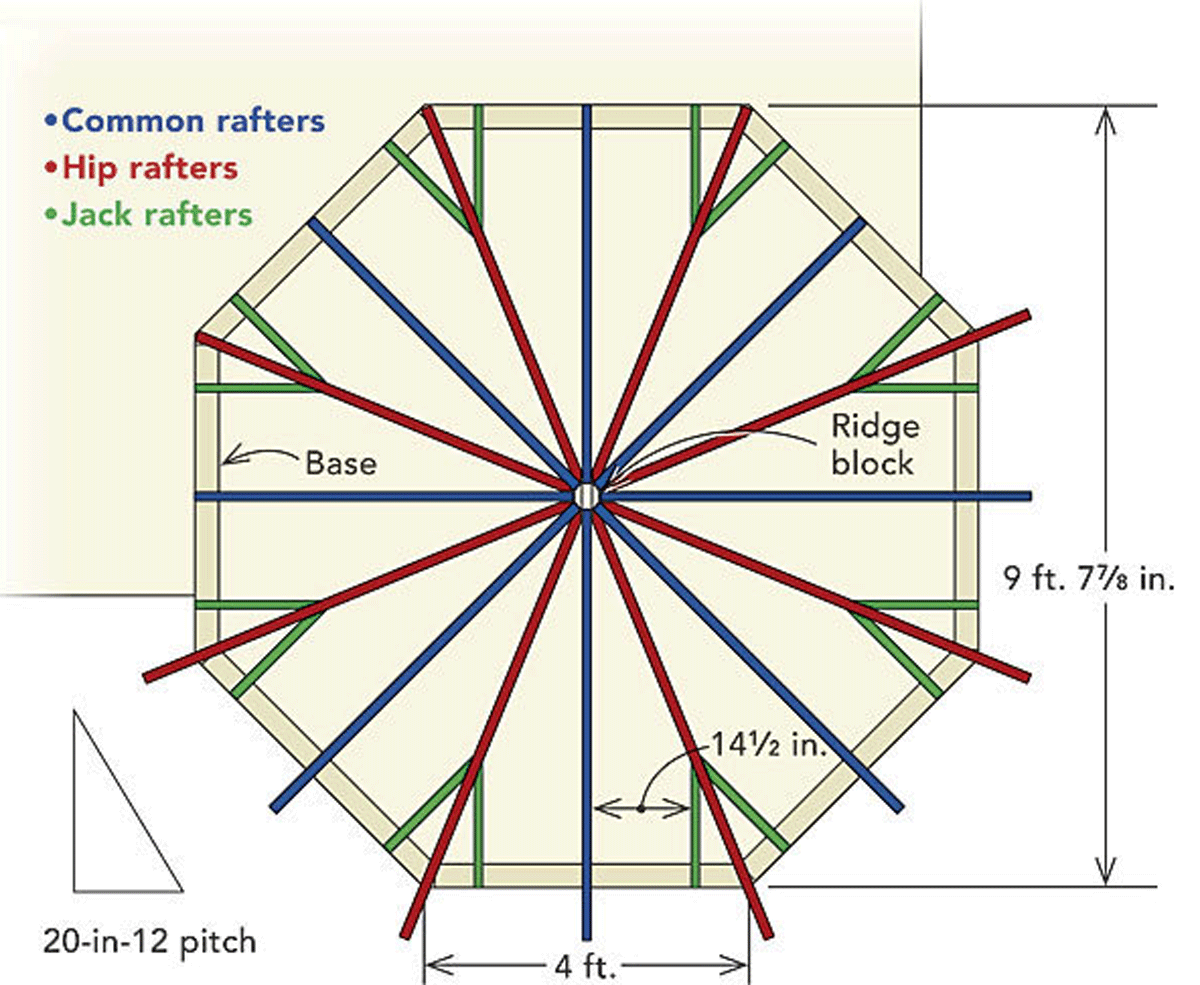 Plan first, cut rafters, then assemble the base 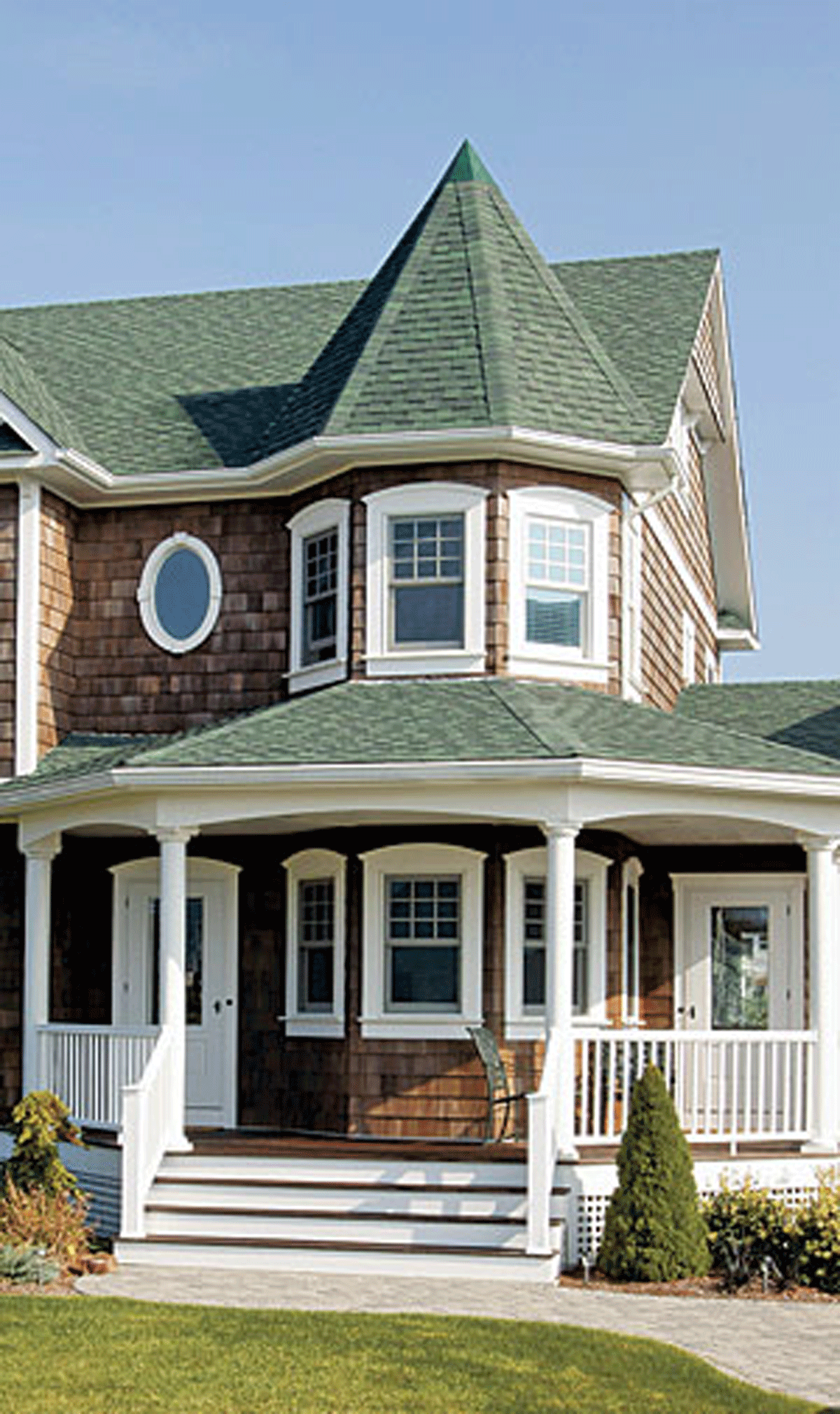 After drawing the plan and figuring out the various framing lengths and angles, I pick the best stock for one common rafter to use as a pattern for the rest. Then I start building the base. I like to build the entire turret on the deck near where it will be located, but away from the edge so that my crew can frame, sheathe, and roof the entire structure without staging or extension ladders.

The first step is to snap the turret-wall outline on the third-floor deck. I plan for double top plates so that I can overlap them at the corners, which helps to stabilize the structure as I build on it.

Once the walls are built, I block them up off the floor to make room for the rafter tails that, when in place, will extend past the floor deck to meet the fascia of the regular roof. Then I recheck and adjust the octagon until its measurements are exact.

Build the base, and raise the eight common rafters

Find the common-rafter length as you would for a conventional roof. First, determine the adjusted run by dividing the footprint of the roof in half; then subtract half the thickness of the ridge. 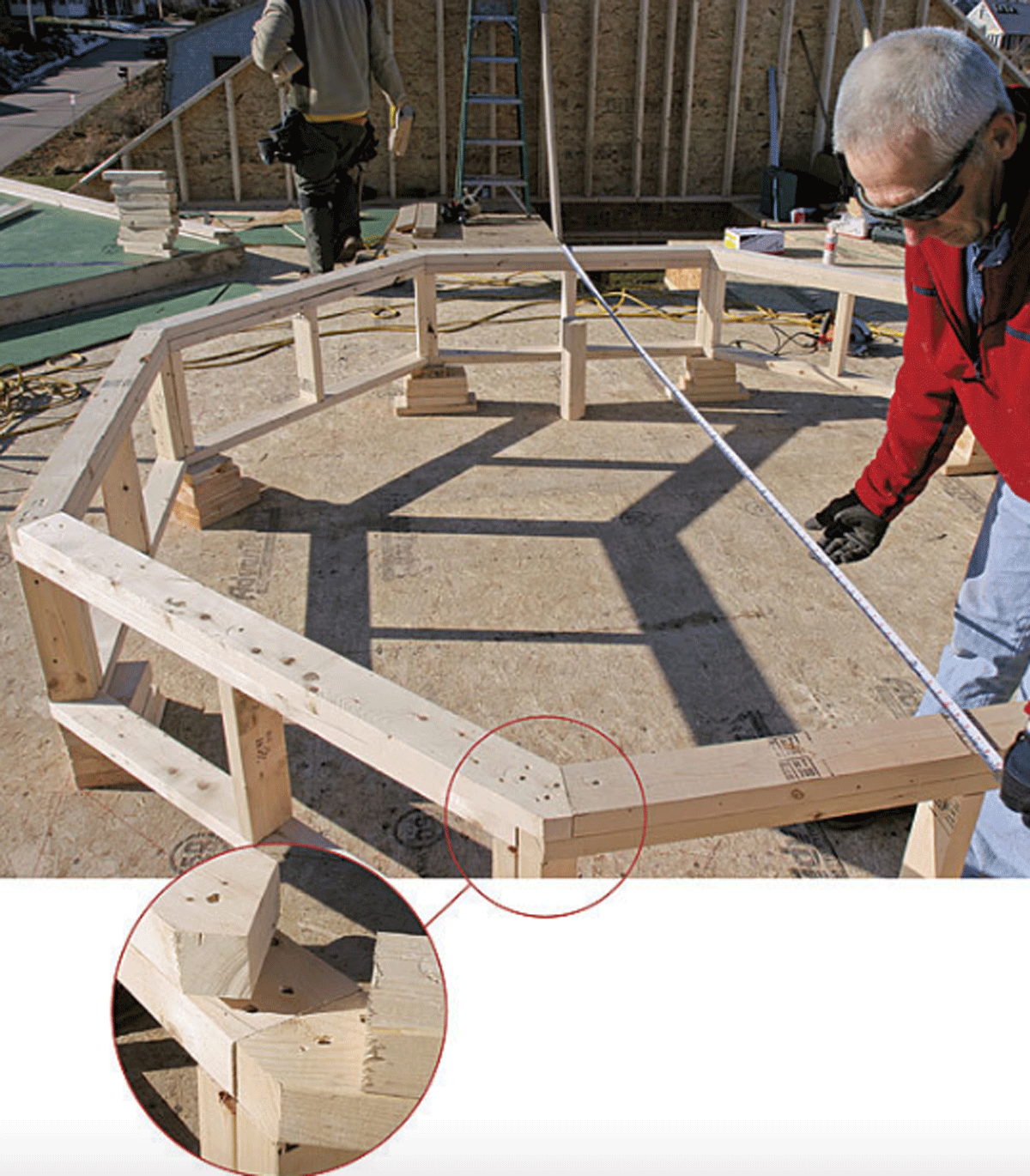 Overlapping double plates give the base greater strength. When complete, the base is blocked up so that the rafters with tails can be installed. Ridge detail. Three pieces of 2x stock cut a couple of inches longer than the hip plumb cut are ripped and beveled to form the octagonal ridge block that measures 3-3⁄4-in. sq. 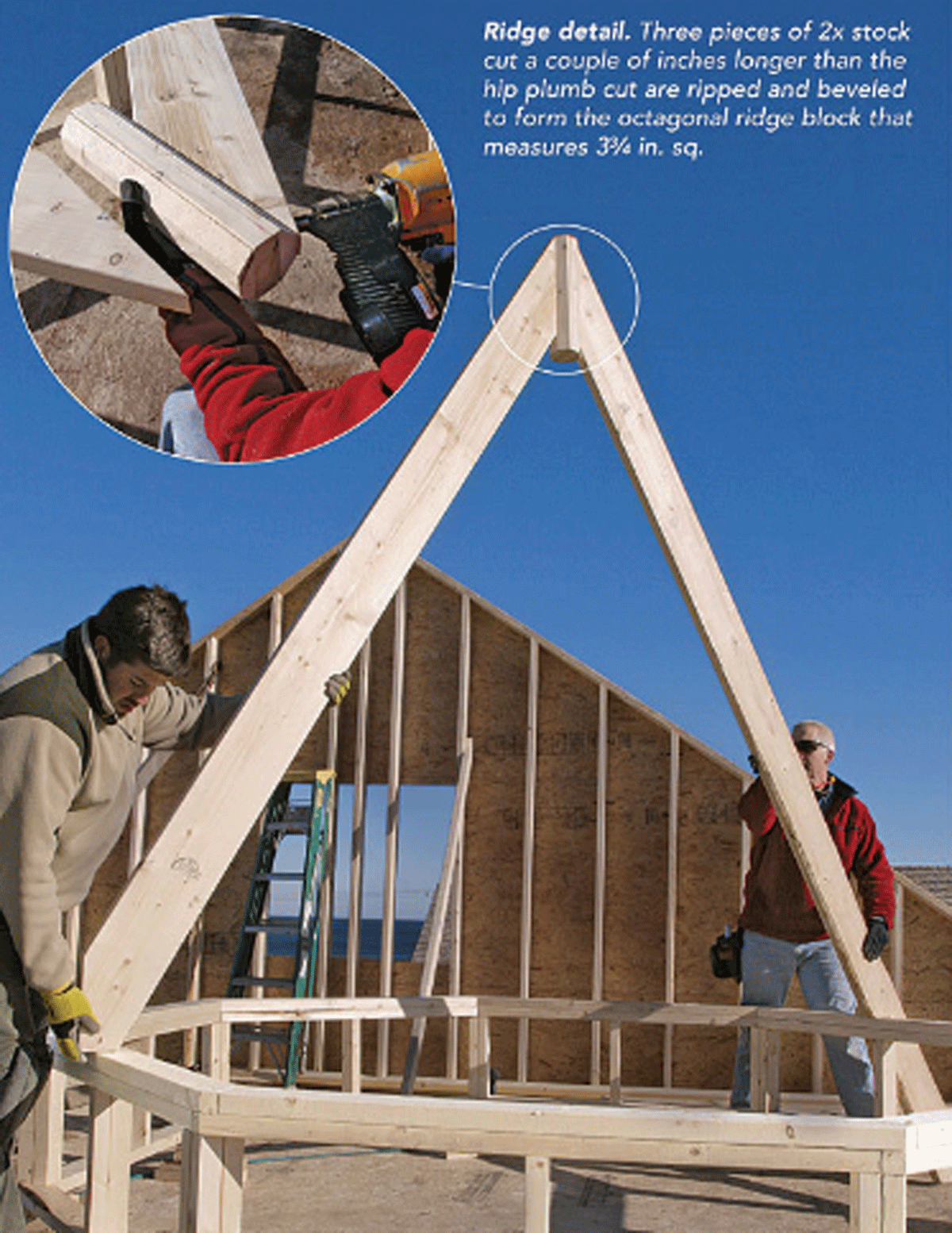 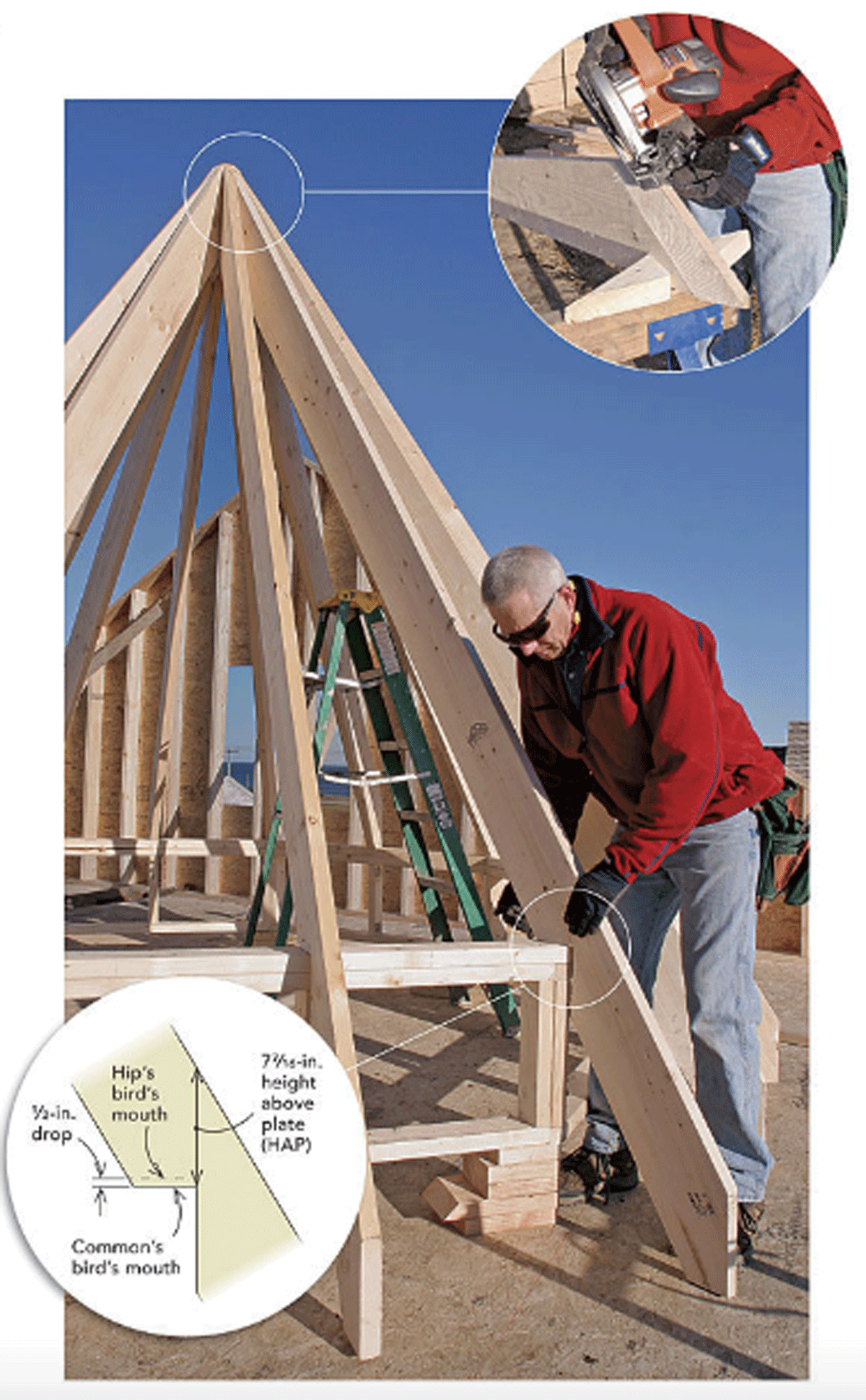 I nail a pair of opposing common rafters to the ridge, then swing the ridge up and fasten it into position. Then I add the remaining six commons, followed by the hip rafters and jacks.

Because the roof sections are so small, there is little tolerance for out-of-plane members, so I check with a straightedge. If there’s a significant problem, I even it out with a cordless planer. When all the rafters and the fascia are in place, my crew and I nail on most of the sheathing, leaving a place for access from inside the third floor. We shingle as much as possible while the structure is still on the deck, which saves a considerable amount of labor and is much safer than doing it from staging. After completing as much work as possible, the whole crew gets underneath the turret and walks it into place. After removing the blocking, we nail the turret base to the deck and start to fill in the rest of the roof. 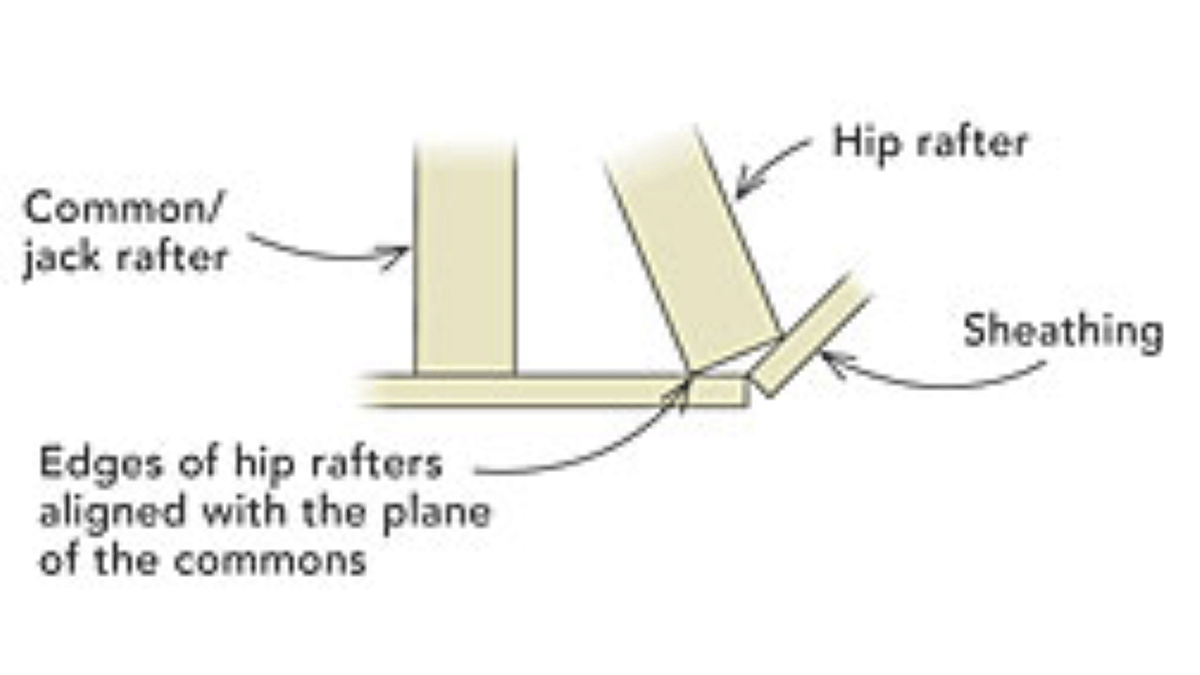 To mark the hips’ bird’s mouths, slide the framing square along the plumb line until the HAP (height above plate) reads the same as the common rafter. The hip rafter must be lowered or its edges will be above the plane of the sheathing. The determining factor in dropping the hip is the thickness of that rafter. Instead of cutting a double bevel (also called backing) along the hip’s top edge, it’s easier to calculate the drop and subtract that amount from the HAP. 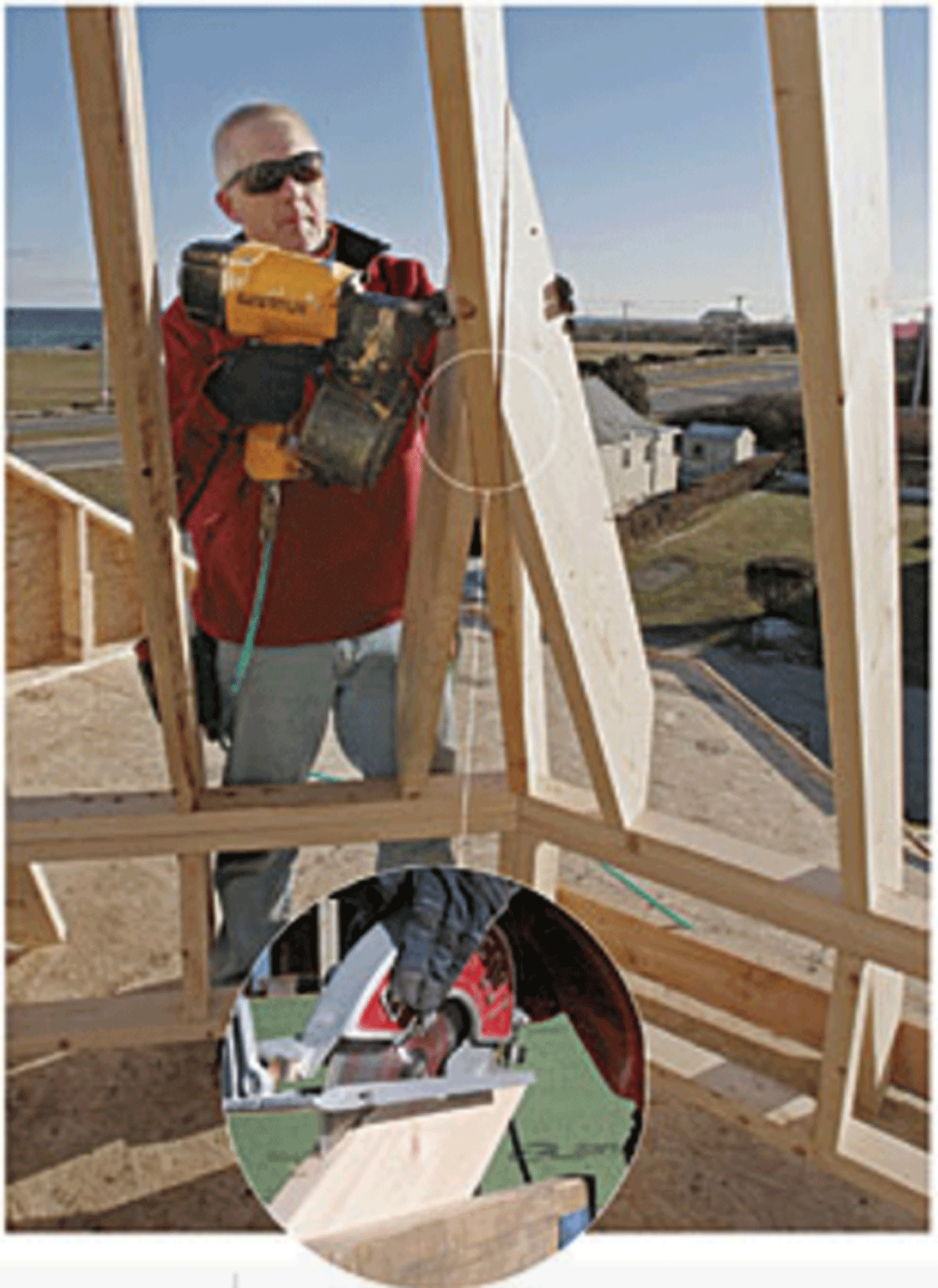 Add a pair of jacks to each hip

Because the octagon walls are only 4 ft. long, there will be only two jack rafters per wall. With the jacks laid out from each side of the common rafter, both (and therefore all) jack rafters will be the same length, but with opposite cheek cuts. By adjusting the same plan-view triangle used to calculate the run of the hip, you can determine the run of the jack.

Get it nearly finished, then slide it in place. Except for the portion that will be enclosed by the roof, the turret is sheathed and shingled on the deck. With most of the crew lifting from inside, the turret roof is moved to its location on the exterior wall. Once in place, the blocks are removed, and the plates can be nailed down.