How it Works: Roof Trusses

The roofs on most new houses in the United States are built with trusses.

Synopsis: The roofs on most new houses in the United States are built with trusses. In this “How It Works” column, structural engineer Rob Munach explains how trusses carry their loads and how T-bracing and roof sheathing add strength. An illustration shows the compression and tension ratings of a truss that has been modeled with a combined dead, live, and snow load of 40 lb. per sq. ft. Munach stresses that trusses cannot be modified in the field. Cutting a truss can have consequences ranging from damage to interior finishes to catastrophic roof failure.

A roof truss is an engineered building component designed to span longer distances than dimensional lumber without relying on interior partition walls for support. The most common truss, a 2×4 Fink truss, is designed to support several different loads. Whether you’re framing a new roof or remodeling an existing truss roof, it’s important to know what components make up a truss and how the assembly works.

There are many kinds of roof trusses, making it possible to use them even on complex roof designs. Trusses are typically set into place one at a time, either by hand or with the help of a crane, but in some cases some trusses can be assembled on the ground and lifted into place as a single sub-assembly. While almost all trusses are made in a factory and trucked in, site-built trusses also are a possibility. 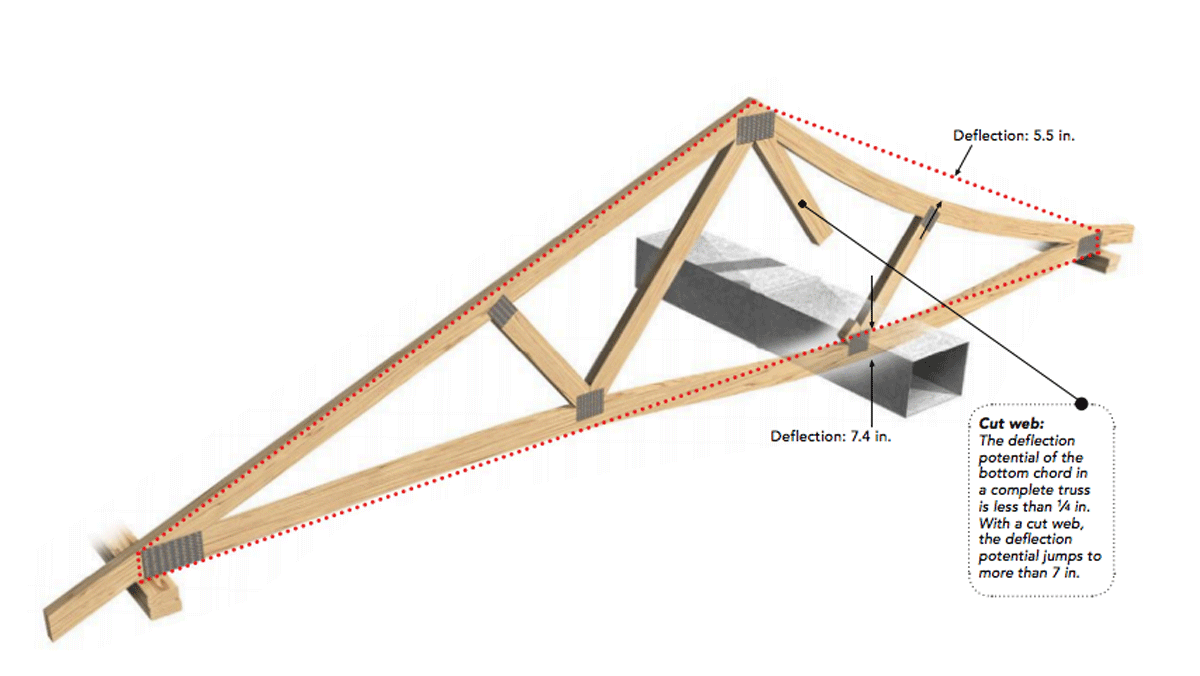 To get you started, here are a few important terms:

Dead loads: The weight of the roof, the truss itself, attic insulation, floor sheathing, ductwork, and drywall used for the ceiling. Live loads are those added by wind, snow or workers building or maintaining the structure.

Top chord: Supports the dead load of the materials used to construct the roof, plus the live loads exerted on the building.

Bottom chord: Supports the dead load of ceiling materials and the live loads of people or objects. The bottom chord also serves as a rafter tie and keeps the top of the exterior walls from bowing outward.

Web: Helps to support and transfer the compression and tension forces from one chord to the other. Individually, the web members may be in either tension or compression, depending on their location in the truss and the direction of the loads on the truss.

Nail plates: Components are fastened together with toothed metal plates that are machine-pressed to the members.

Better bracing: Nailing 2×4 T-bracing to the top edge of long web members prevents them from deflecting sideways. T-bracing takes more time to install than continuous lateral bracing and is more expensive, but it’s more effective and easier to install correctly.

Truss performance by the numbers

In a truss, the bottom chord and the top chord are under tension and compression forces as a result of the loads on the roof. Which chord carries tension and which carries compression depends on the direction of the overall loading on the truss. The loads on the truss are generally in a downward direction, but may turn upward during extreme wind. The numbers cited in this article are the actual compression and tension ratings of a truss that has been modeled with a combined dead, live, and snow load of 40 lb. per sq. ft. They illustrate the push-pull relationships of all the truss members. 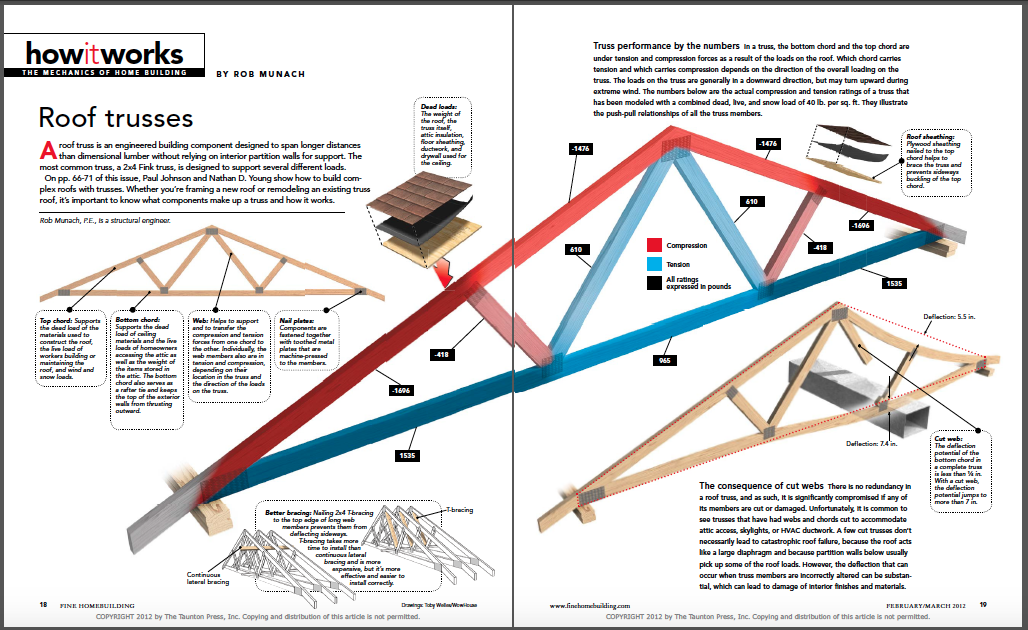 For more photos and details on how roof trusses work, click the View PDF button below.

All About Roof Trusses — Trusses can be used to frame even complex roofs, but they must be installed and braced properly.

Building Hip and Valley Roofs With Trusses — Entire hip sections can be assembled on the ground and lifted into place with a crane as single assemblies.

Framing a Gambrel Roof — Site-built trusses are a way to frame this traditional barn-shaped roof quickly.

Framing Tricky Truss Roofs — Simple gable roofs require lots of the same kind of truss. But when a roof includes hips and valleys, count on trusses in different configurations.