This wall design ensures good performance and solves the problems of inside and outside moisture.

After posting an article at GreenBuildingAdvisor.com titled “Is Cold Sheathing in Double-Wall Construction at Risk?” which covered a study of moisture in double-stud walls in a Massachusetts home, I was contacted by Fine Homebuilding contributing editor Joe Lstiburek. Joe is principal of Building Science Corporation (BSC), and his company had done the cited research as part of the Building America Program. The reason he called was to make it clear that BSC had only monitored the project. Some readers of my article had gotten the mistaken impression that BSC had at least endorsed, if not designed, that double-stud wall. Joe considers the wall design too risky, and the excessive moisture content in the exterior sheathing confirmed his misgivings. Although the sheathing didn’t show damage when the wall sections were deconstructed after three years, the amount of moisture detected during winter and spring was a concern. 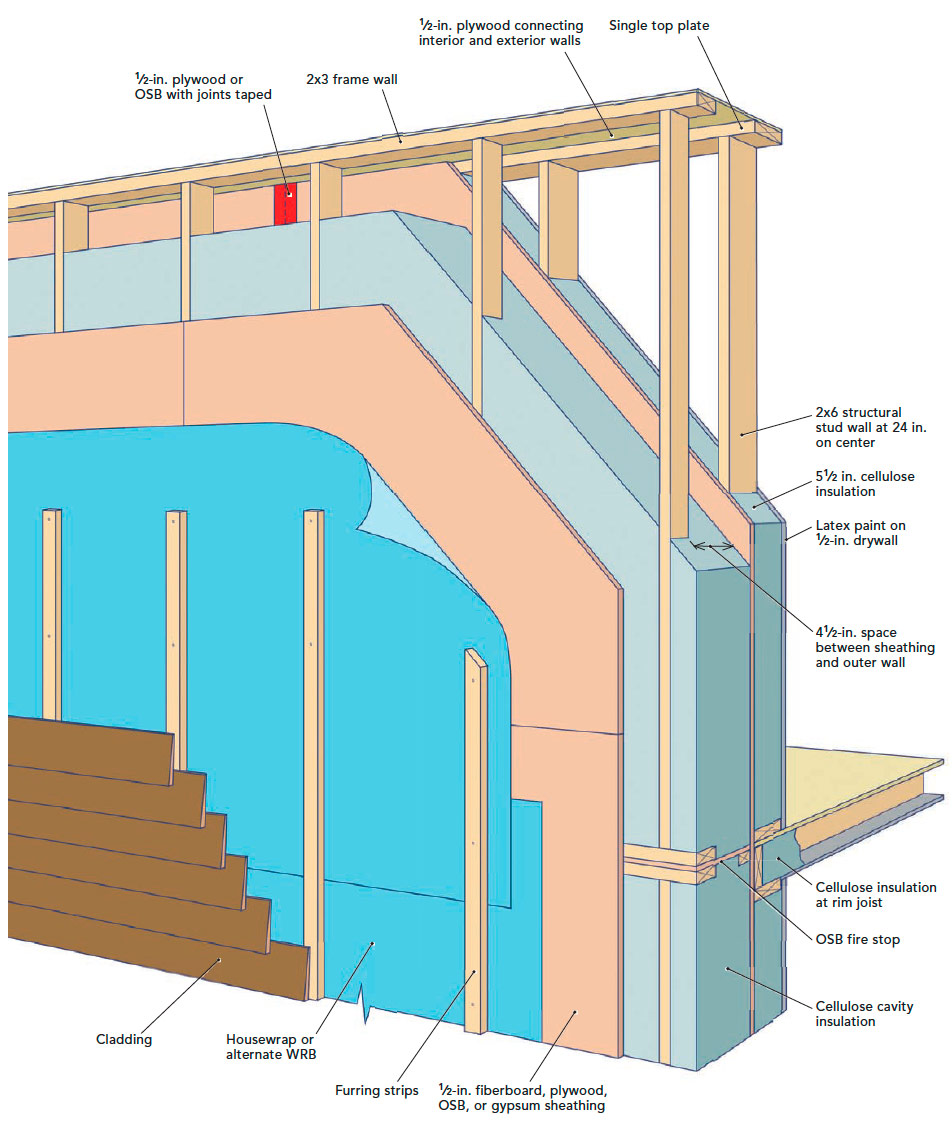 The drawing shows Joe’s preferred double-stud wall design, which Joe said solves the problems of inside and outside moisture. (For more details, see “High R-Value Wall Assembly: Double Stud Wall Construction” at buildingscience.com.) This wall has two layers of framing, which is why it’s called a double-stud wall, but there’s an important difference between this wall and the one in the BSC study. Joe specifies a layer of OSB or plywood on the outside of the inner wall when using air-permeable insulation such as cellulose or fiberglass.

“Plywood or OSB works in every climate zone,” Joe said. This layer of sheathing serves as the primary air-control layer as well as the vapor-control layer. Its permeance changes with relative humidity, which permits drying to occur. When taped, the sheathing is airtight, but it can reduce moisture accumulation and damage by increasing its permeance with increased humidity. Some builders in cold climates put a layer of 6-mil polyethylene inside a double-stud wall instead of OSB or plywood. I asked Joe for his thoughts on that technique. “In terms of the physics, it’s great,” he replied. “In terms of practicality, it’s a very fragile way of doing things. We did this in the early ’80s, and it was difficult to build. That’s why I like sheet goods.”

Another thing Joe likes is to have the structural part of the double-stud wall be the inner wall. Similar to a Larsen-truss wall, the inner wall is built at the edge of the framed floor and sheathed. The outer part of the wall is hung from the studs. “I think it’s colossally stupid to have the second wall of a double-stud wall be on the inside of the structure,” Joe said. “That’s an incredible waste of floor area and materials and very, very difficult from an air-tightness perspective.”

On the exterior of the outer wall, he specifies a vented rain screen to aid drying. The drawing shows furring strips, but any method that provides at least a 3/8-in. gap should work. A ventilated cladding, such as vinyl siding, will also work. Lstiburek’s ideal double-stud wall has all the thermal, air, and vapor control that it needs to ensure good performance and to avoid moisture problems. “I think the walls that I’m recommending are not risky, regardless of whether we’re talking about interior or exterior moisture,” Joe said.

The construction of this double-stud wall is intended to solve the problem of inside and outside moisture. A key element is the layer of sheathing on the inside wall.

Previous: A Case for Double-Stud Walls Next: The Passive House Build, Part Four: Framing for Efficiency