Does a Roof Need a Ridge Vent?

How and where you vent your roof depends on a a lot of factors, including what type of roof you have, where you live, and what existing vents you have.

Forum member “Pizza” has a sister with a house in Bucks County, Pennsylvania, that was built in the mid-1980s. Like many others of the era, the house has a gable vent at each end of the attic, along with soffit vents at the eaves. Working in tandem the vents have apparently done their job.

Now the house needs a new roof, and the contractor is recommending that Pizza’s sister install a ridge vent.

“I have learned here (building science articles by Joe Lstiburek) that in her case ridge vents are unnecessary and actually detrimental to cooling the attic space/roof when you already have gable and soffit vents, something to do with gable vents overpowering the vented soffits,” Pizza writes in a post at Fine Homebuilding’s discussion forum.

“Should I tell my sister that she can tell the contractor to NOT install the ridge vents?”

That question is the topic of this Breaktime Spotlight.

Block the gable vents, or maybe not

DanH is among those who think the best strategy is to block the gable vents and go along with the contractor’s suggestion to install the ridge vent.

“Not necessarily,” counters Seeyou. “If there is not a proper soffit or other intake, then the ridge vent won’t function,” Seeyou writes. “I’ve seen lots of gable attics where one gable vent was the inlet and the other, the outlet. More info is necessary.”

Despite Pizza’s assurances that his sister’s house has vented soffits, xxPaulCPxx contends they may not be large enough, or numerous enough.

Hammer1 has given up on gable vents entirely.

“The reason we changed from using gable vents is that they don’t work,” Hammer writes. “Hot air in the attic forms pressure and won’t allow outside air in. If they work at all, it’s usually just in the area close to the gable vents, not the entire attic. The combination of a ridge vent along with continuous soffit vents gives you a flow through of air similar to the way a chimney works. Even without soffit vents, a ridge vent is much more effective than gable vents.”

PaulCP thinks Hammer is right. “The problem with gables is they short circuit the air flow,” PaulCP writes. “The whole point to a ridge vent is that it takes air from all along the bottom of the roof line and exits it out the top, kind of like a toilet. You WANT all the sides to be washed. That doesn’t happen when most of the flow is from two specific points.”

Hammer says, however, that blocking gable vents isn’t necessary. “The whole idea is to keep the attic as close to the outside temperature as possible,” Hammer says, “getting the accumulation of hot air out.”

Not according to the manufacturers of ridge vents, DanH adds.

“I’ll admit I haven’t looked recently,” DanH says, “but in the past the manufacturers of ridge vents recommended blocking off gable vents when intalling ridge vents (assuming that adequate soffit venting is in place). The reason is to keep the gable vents from drawing in air and reduce the draw on the soffits.”

“Moving the maximum amount of air is what it’s all about,” Hammer replies. “So what if air comes in through the gable vents, it will just add to the flow, hot air rises.”

PaulCP also thinks the benefits of closing off gable vents is marginal.

“Too much focus is placed on closing gable vents with ridge vent,” PaulCP writes. “In laboratory testing, it might increase the functionality of the ridge vent somewhat. In real life, it’s not worth the trouble and more venting is usually better than less.”

What happens when snow blocks the ridge vents?

In snow country, ridge vents may be blocked by drifting snow during the winter and therefore unable to work correctly. At least that’s the concern voiced by Kdesign.

“The reason I ask is that I am in Minnesota where we get considerable snow, and yet ridge vents seem to be the preferred discharge vent,” Kdesign writes. “I have never heard anyone mention a concern over the fact that ridge vents are probably blocked at least half the time over the course of a winter.

“I sometimes wonder if many people believe that ventilation in the roof system is to keep it cool in the summertime,” Kdesign adds, “and don’t realize that the primary purpose is to control cold weather issues. With that belief, snow plugging the ridge vent would seem irrelevant.”

DanH says ridge vents remain effective in winter because winds generally clear the ridge within a few days of even a heavy snow, and because warm air working its way up through the attic will melt snow covering the vent.

“Certainly there are situations where conditions can be so severe that neither of these occur in a timely fashion,” DanH adds, “but they are rare in Tropical Southern Minnesota.”

DickRussell admits that under certain conditions, a layer of ice-encrusted snow can cover and block ridge vents. But overall, he thinks they remain functional most of the time.

“Why do I think this?” he writes. “In a cottage we used through a few winters, I used to see a lot of wetness from moisture in the house condensing on the underside of the roof deck. There were gable vents but no ridge vent. After I re-roofed the place, with a ridge vent installed, that surface stayed dry essentially all the time.”

Kankan writes that his well insulated roof has no problem with ice dams, as long as the ridge vent is visible. “But when it gets buried,” Kankan adds, “bam, dams.”

“I have seen with my eyes my ridge vent get completely buried in snow and saw results of lack of ventilation instantly,” Kankan says.

Maybe, DanH ventures, there is no single answer to this puzzle.

“I think the thing is we all have different experiences, based on where we live and the construction of our homes,” Dan writes.

For detailed information that could help you deal with your own roof-venting issues, read:

A Crash Course in Roof Venting

Understand when to vent your roof, when not to, and how to execute each approach successfully 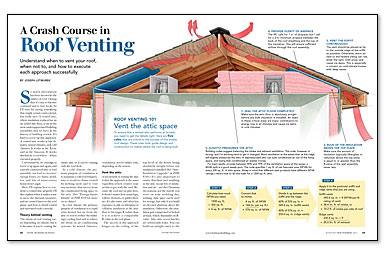 Adequate Roof Venting – Is it necessary to close off the gable vents? If so, how can I do that? Do I have to remove them and fill in the void with siding? And how do I know how many soffit vents to install? Editorial Adviser Mike Guertin answers this question regarding adequate roof venting.

Attic-Ventilation Strategies – Except in some specific cases, building codes and shingle warranties require new roofs to be vented. If you’re building a house with an unconditioned vented attic, the necessary attic-ventilation details are fairly straightforward. Still, mistakes are common.

Venting a Tricky Old Roof – Old houses often pose challenging  problems when it comes to air circulation and ventilation. In this case, FHB editorial adviser Mike Guertin describes his approach to venting an attic where he was unable to install air intake vents at the eaves.

Roof Vent Retrofit From the Outside In – Reroofing is the perfect time to lift the hood and make short work of an otherwise awkward venting job.

Getting the Details Right for an Unvented Roof – The roof is on, and insulation contractors are now advising Ted Storm on how much open-cell foam to spray on the back side of the roof deck. Three contractors suggest the same thing, but is their advice on the right track?

Roof Venting Doesn’t Affect Cooling Loads – It may defy common sense, but researchers have not been able to measure any energy savings gained in summer by venting a roof.

X
X
Previous: Should I Close My Attic Gable Vents? Next: Should I Vent a Roof Insulated With Spray Foam?