Clever Fix for a Sagging Floor

Learn how to level floor framing in an old home by lifting joists with temporary walls, installing a midspan beam, and adding new studs to distribute the load down to the foundation.

Synopsis: Remodeler Andrew Grace details how his team leveled out a balloon-framed floor on a recent project. The floor was so badly out of level that it would be impossible to properly situate the future bathroom above. Grace and his team first jacked up the middle of the floor as high as possible and installed an LVL flush beam near midspan. Then they lowered one end of the floor where it attached to the exterior wall made possible by replacing the old ribbon board. The article includes a detailed drawing of the floor-to-wall assembly and walks through the steps taken to lower the floor.

Although we also build new homes, my company’s bread and butter is updating and remodeling turn-of-the-century houses, most of which have balloon framing. Balloon framing was a transitional method of construction that came between timber framing, which was common until the late 19th century, and the modern platform framing that came into style in the post-WWII period. A balloon-framed house has studs running uninterrupted from the mudsill to the plate under the rafter tails. Second floor joists are nailed to the bearing walls and supported by a piece of stock called a ribbon board—in this case 1×6 stock—let into the studs (see drawing, right). One of our recent whole-house balloon-frame remodeling projects had a floor so out of level that anyone sitting on the toilet in the future bathroom risked sliding off. Just walking on this part of the second floor was vertigo inducing, never mind trying to make tiled walls look right. The floor had to be leveled.

In a sloping-floor scenario like this, most remodelers immediately start jacking up the low point—but when a house has sagged this much and has been that way for decades, rarely can you correct the whole amount by jacking. If you try, you may end up breaking framing members or the roof or second floor will start lifting where you don’t want it to.

Structural problems like this sagging floor often occur from foundation settlement or other structural deficiencies. Obviously these kinds of things must be corrected before you start leveling the floor. 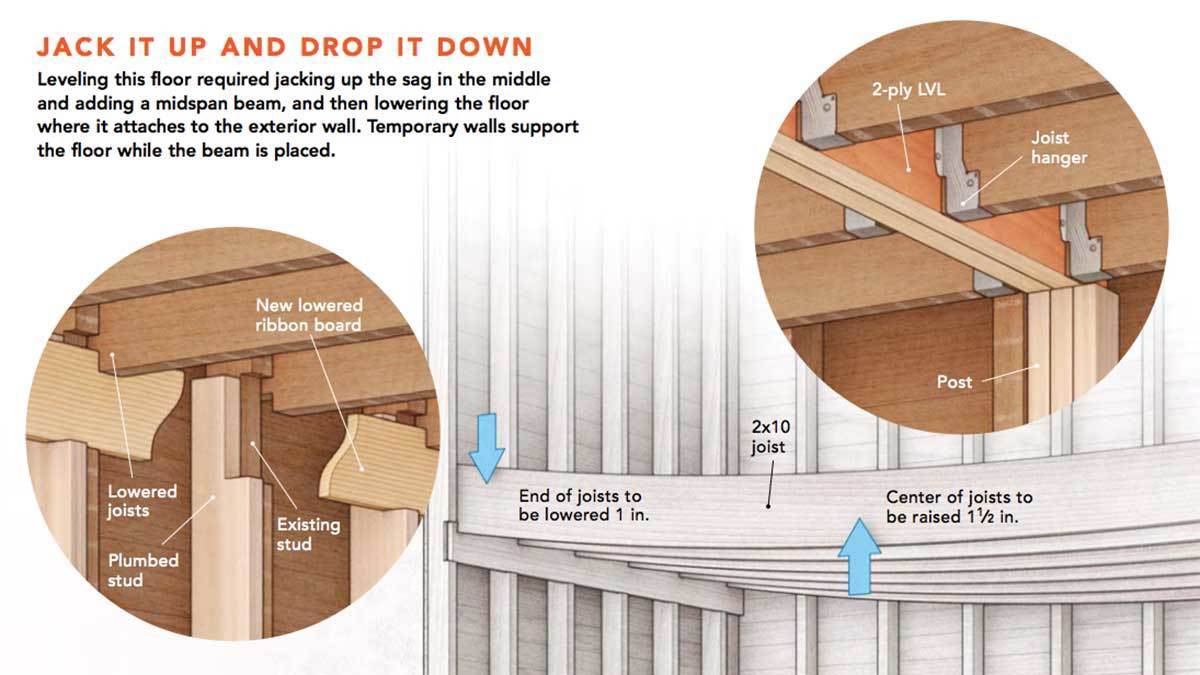 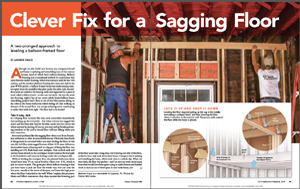 How to Fix a Sagging Beam

Getting the Sag Out