How it Works: Wall Framing

When constructed correctly, a house’s frame resists a variety of loads, such as wind and snow.

Synopsis: In this “How It Works” column, engineer Rob Munach defines and describes the components of advanced wall framing. The use of advanced-framing techniques reduces energy losses, resource consumption, and construction costs. However, it may not be enough to withstand extreme loads, such as a falling tree. The components of advanced framing include top plates, header hangers, sheathing, king studs, rim joists, mudsills, cripples, floor joists, studs, sill plates, and headers.

In the article How it Works: Building Loads I wrote about the loads present in a house and how they affect the way you need to build a house. When constructed correctly, a house’s frame resists a variety of loads, such as wind and snow. When built poorly, the frame will fail. When overbuilt, it can lead to energy losses through thermal bridging.

To be a successful framer, you should have a comprehensive understanding of wall assemblies and employ advanced-framing techniques including those illustrated here when appropriate. Keep in mind that while advanced framing reduces energy losses, resource consumption, and construction costs by using significantly less lumber than the typically framed house, it lacks the redundancy to stand up to extreme loads like a falling tree. So use advanced-framing techniques sensibly.

By looking at the components of a wall assembly and the role each component plays within a wall, you can begin to understand how a wall functions as a system. That’s critical information, whether you’re following standard building practices or advanced techniques. Here’s how it works.

Headers transfer wind-uplift loads and dead loads around openings in a wall assembly. They also transfer wind loads that blow on the face of the wall into the king studs. If exterior walls are not load bearing, headers can be constructed similar to the sill using a stud on the flat. In this case, a header has to resist wind loads blowing only on the face of the wall.

Installed on the flat, the sill plate supports the window and transfers wind loads blowing on the face of the wall into the king studs. In a lot of cases, only a single sill plate is needed, not a double. Multiple sill plates are sometimes needed in wide openings.

Spaced 24 in. on center, 2×6 studs carry the downward load of the rafters, joists, or top plates above them. The studs in a wall also resist wind blowing against the wall and wind-uplift loads in walls that are not fully sheathed with plywood or OSB. This wall assembly yields more space for insulation than a wall with 2x4s spaced 16 in. on center.

Floor joists resist live and dead loads. When joined with the rim joist, they create a system that resists racking forces on the house.

Cripples are short 2x blocks above and below rough openings. Those above the header transfer wind and gravity loads from the top plate to the header. They also give you something to nail sheathing to. The cripples below a sill serve mostly as nailers for the sheathing, so the number that you use can be reduced to only one in most instances.

The top plates carry the downward load from the roof rafters or floor joists above. They also act as a “shear collector” by distributing shear loads from the floor or roof assembly above and transferring them along the length of the wall to sheathed corners or braced wall segments. When the rafters or joists are directly in line with the studs of the wall below, only a single top plate is needed. Double top plates, however, add strength and redundancy to the structure and may be required in high-wind and seismic areas. 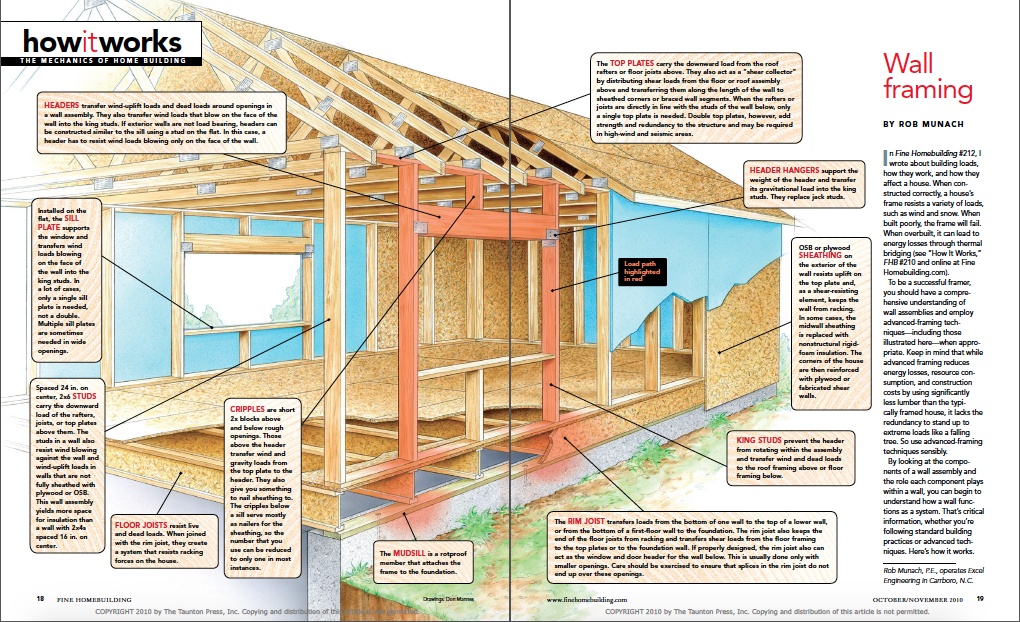 For more diagrams and details on wall framing, click the View PDF button below.

View PDF
Previous: Anatomy of a Stud-Framed Wall Next: How it Works: Shear Walls