The Loads Carried by a Roof

Understand the difference between dead loads and live loads, and design and detail the roof structure to meet local weather conditions.

The dead loads on most roofs are pretty small; because the roof is the highest part of the frame, it merely has to carry its own weight and the weight of the shingles (or other roofing material) installed over it. The live loads are a different matter. The roof takes the brunt of the weather and, in some areas, the live loads imposed by Mother Nature can be very large. If you’re building in an area where heavy snow, high winds, or seismic events occur, the roof structure has to be designed and detailed to meet those conditions. As always, the best sources of this information are local building officials and local design professionals.

When architects and engineers design raftered roofs, they use one of two basic approaches. If they use a structural ridge, the ridge serves the same function as any of the other structural beams in the house. It has to be strong enough to carry the loads imposed on it, and it needs to be properly supported at each end. The posts that support the ends of structural ridges create point loads, and these loads have to be transferred via a well-conceived load path to the footing. Both the beam and the load path should be designed by an engineer or architect. 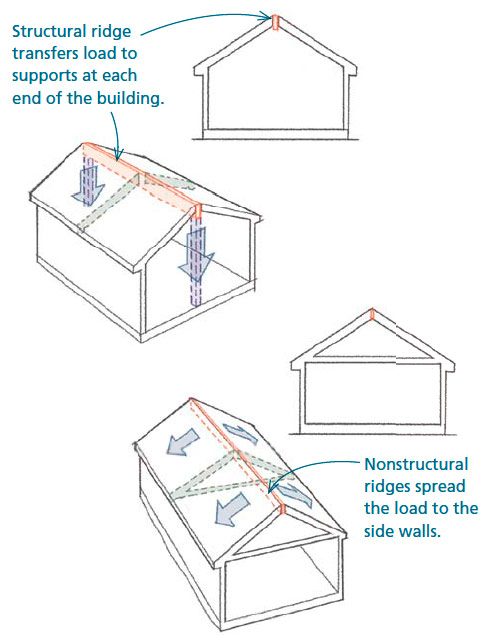 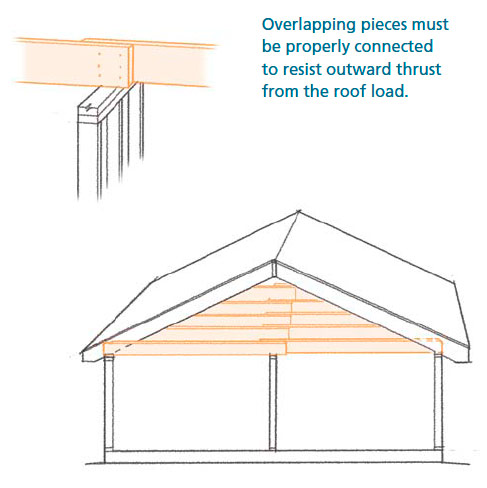 Structural ridges are heavy and expensive, and the main reason designers specify them is to open up the space below the roof. With a structural ridge, there is no need to restrain the bottom ends of rafters from spreading and, hence, no need to specify joists or collar ties. Designers often specify structural ridges, therefore, when they want to create cathedral ceilings.

The second approach to raftered roof structure uses nonstructural ridges, which are lighter and less expensive than structural ridges. Nonstructural ridges serve mainly as convenient surfaces to attach opposing pairs of rafters. The rafters lean against one another, with the ridge sandwiched between them. In essence, the load on one side is offset by the load on the other. The ridge, which can be as thin as 3⁄4 in., doesn’t hold this weight up; instead, it simply serves as a surface to press against. With the ridge doing little to hold up the rafters, there is a strong tendency for the ridge to sink and the bottom ends of the rafters to push out. Here is where the ceiling joists or, in some cases, exposed beams or cables come into play. They run across the span of the building and tie the bottoms of opposing rafters together. If the bottoms can’t thrust out, the top can’t sink.

Because restraining the outward thrust of the rafter bottoms is an essential part of the structural scheme, it is extremely important to know and follow the fastening schedule at the rafter/joist intersection. On many houses and additions, there is an equally important connection toward the center of the structure. Where single joists or beams cannot span the entire width of the structure, carpenters need to overlap two pieces—usually over a central wall. These overlapping pieces must be properly connected; otherwise, the bottoms of the opposing rafters will not be tied together. Be sure, then, to follow the fastening schedule specified for this connection, too.