Needing to find level and plumb is basic to just about every aspect of building and remodeling. While the market for laser levels continues to grow, you can still find a variety of spirit levels on most job sites. Not all spirit levels are long and straight, however. Inventive minds have discovered that a small container filled with colored liquid and a bubble can be incorporated into a variety of designs, each of which can offer an easier and sometimes more accurate way to get a reading.

The bubble in a bull’s-eye level floats inside a convex disk instead of a cylindrical vial. Level is achieved when the bubble finds the bull’s-eye in the center of the disk. A bull’s-eye level is useful when placing items such as large appliances that need to be level in two directions. The cross-check level provides the same information, but it does so with two cylindrical vials at a right angle to each other. When the bubbles in both vials are centered, the object the device is resting on is level. 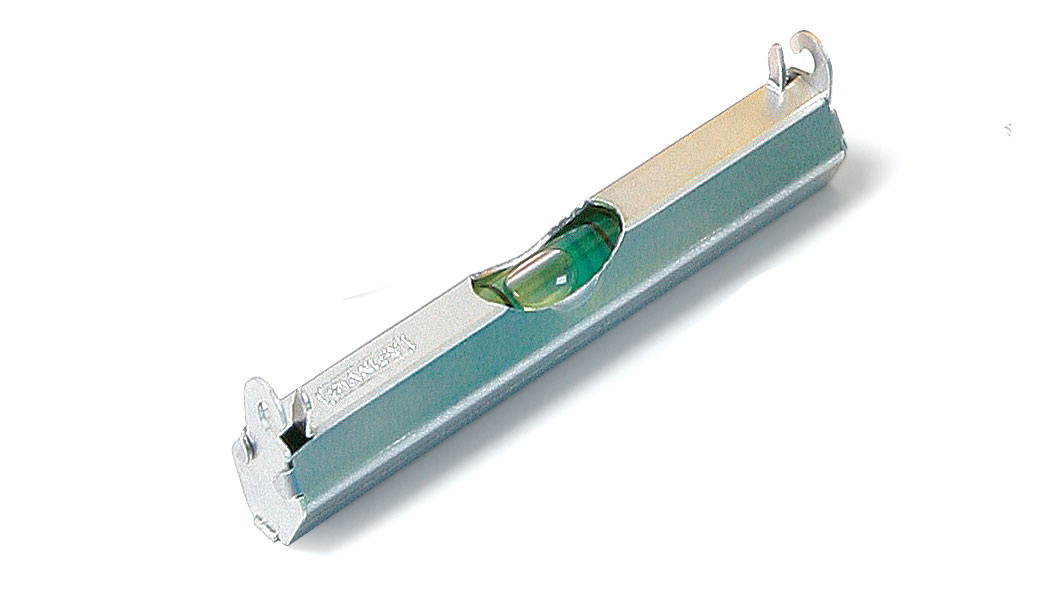 This tiny level attaches to a taut stringline and is used to find level for two points on a span. Its degree of accuracy is not precise, and it can’t be used for finding level across the entire span (even the tightest stringline will sag a little), but it’s good enough to use for projects such as setting fence posts, checking the pitch of a driveway, or ensuring a level retaining wall. The trick is to position the level in the center of the string. The farther the tool is from the center, the less accurate your reading will be. 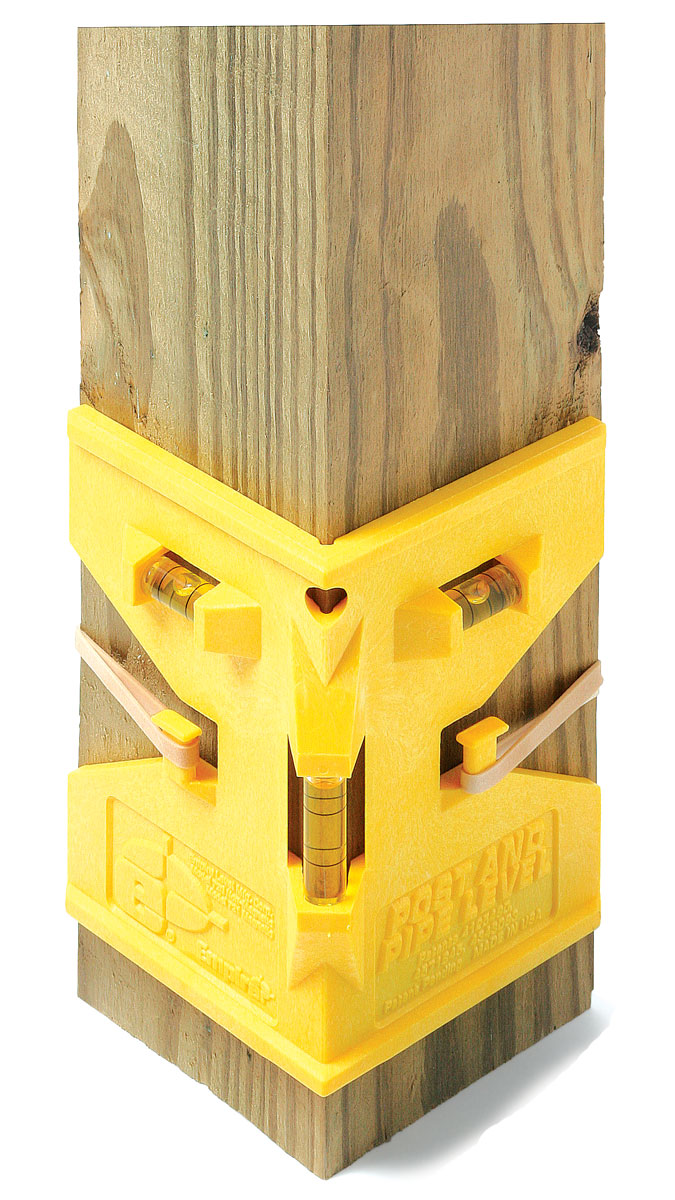 Made of plastic and either hinged or molded into a 90° angle, a post level is attached with a rubber band or elastic strap. It registers plumb with a center vial and level with a vial on each side of the angle. While its design makes it ideal for fitting around posts, a post level can also be attached to a large-diameter pipe. 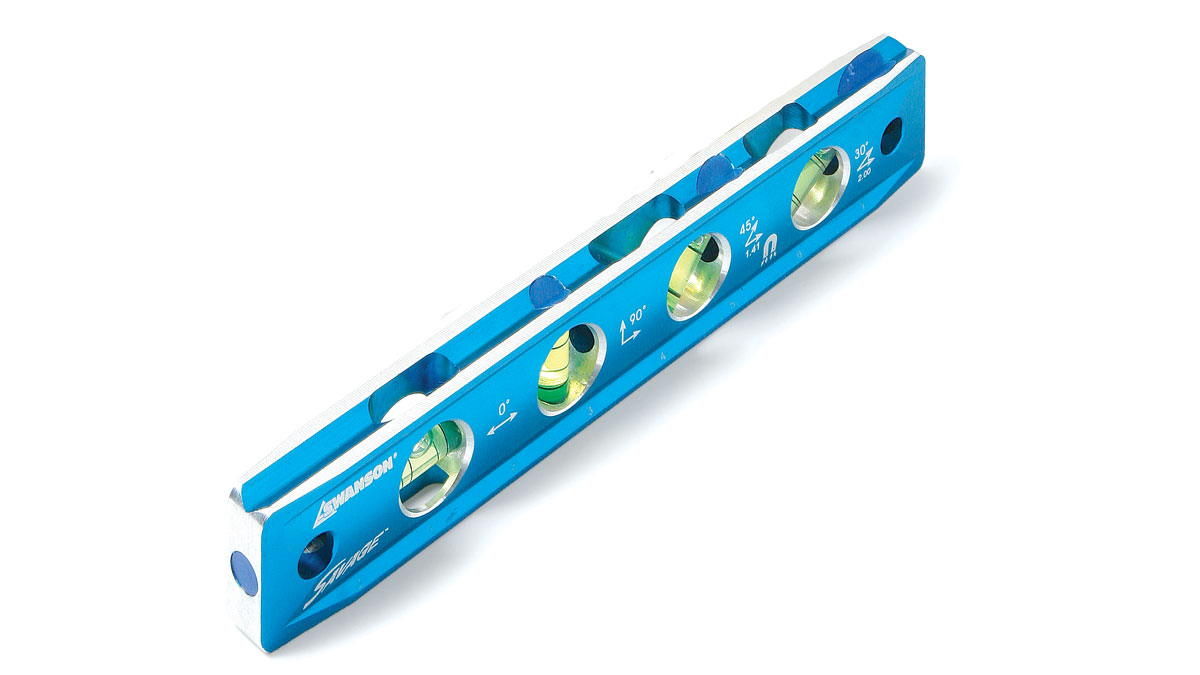 Designed to fit into tight spaces, torpedo levels pack a lot of features into a small package. Usually about 8 in. to 10 in. long, most of these levels have at least three vials: one each for level, plumb, and 45°-angle measurements. Some include a fourth vial for measuring 22.5° or 30° angles. Rare-earth magnets along one edge of many torpedo levels keep the level from moving when it’s against ferrous metal. Some manufacturers groove this edge so that it fits better around pipes. If you carry a torpedo level with magnets in your tool belt, however, you may find it annoying to have to scrape away bits of steel from fasteners and drill shavings. Manufacturers have customized torpedo levels to a remarkable extent. Johnson, for example, has 17 different torpedo levels listed on its website. One of them is designed for welders, two have luminescent vials, and one has a thumbscrew for attaching to a pipe before bending an angle. 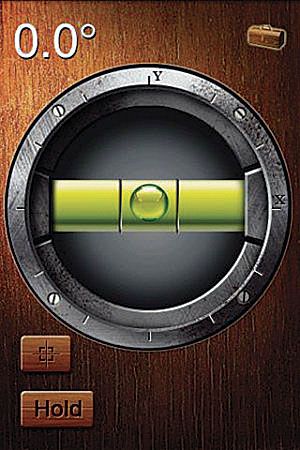 If there’s a smartphone in your pocket, you already have a multipurpose leveling tool; you just need to download any one of many apps offered in both the Google Play and Apple iTunes stores. These apps display a virtual vial and bubble, but they also calculate angles to one or two decimal points. Many apps display both cylindrical and circular vials and automatically toggle between the two depending on whether the phone is on edge or lying flat. Don’t trust a smartphone app to give you a reading that’s as accurate as what you can get from a tool designed specifically for that purpose, however.