There's more to it than just deciding between solid sheathing and open sheathing.

Roof sheathing attaches to the surface of the rafters or trusses to form the structural skin of the roof. It spans the rafters to support the roofing and, in the case of panel sheathing such as plywood or OSB, it acts as a diaphragm with the walls to resist horizontal loads. Roof-sheathing material must be coordinated with the roofing itself, since each type of roofing has special requirements.

At exposed roof overhangs, the sheathing must be rated for exposure to the weather. The everyday sheathing used on the body of a roof is not rated for weather exposure, so when exposed eaves and/or rakes occur at the perimeter, a different (more expensive) weather-rated grade of plywood or OSB must be used. Solid board sheathing may also be used at these exposed locations. 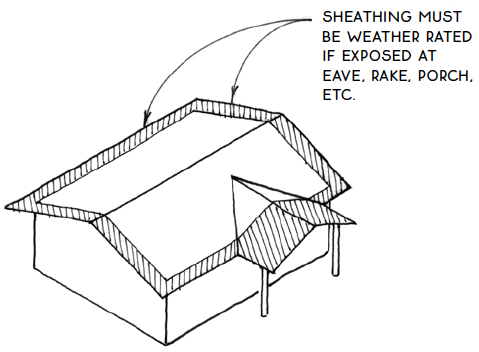 Solid sheathing provides a continuous surface at the plane of the roof. This type of sheathing is necessary for composition roofing and built-up roofing, which have no structural capacity themselves. Metal, tile, and shingle roofing may also be applied to solid sheathing. For economic and structural (lateral-load) reasons, solid sheathing is almost always plywood, OSB, or other structural panels. The structural panels act as a diaphragm to transfer lateral loads at the plane of the roof to the walls. When an exposed ceiling is desired, solid sheathing may also be constructed of solid-wood tongue-and-groove boards. Tongue-and-groove sheathing, however, does not act as a diaphragm, so other methods of providing lateral-load stability, such as diagonal bracing, must be employed.

Open sheathing, also called skip sheathing, is composed of boards spaced apart. This type of roof sheathing is used under wood shingles and shakes, which usually require ventilation on both sides of the roofing material. Open sheathing may also be chosen for economic reasons, but only if used with roofing systems such as metal or tile, which have the structural capacity to span between sheathing boards. Alternative methods of providing lateral stability, such as diagonal bracing, must be used with open sheathing.

Combinations, of course, are also possible and often appropriate. For example, solid sheathing at exposed overhangs may be combined with open sheathing on the rest of the roof.

Sheathing recommendations in relation to roofing types are as follows:

Composition and built-up roofing must be applied to solid sheathing because these roofing materials do not have the structural capacity to span between the boards of open sheathing.

Metal and tile roofing may be applied to either solid or open sheathing. Both roofing materials have the strength to span across open sheathing, but there is no advantage for either in having them breathe from both sides. 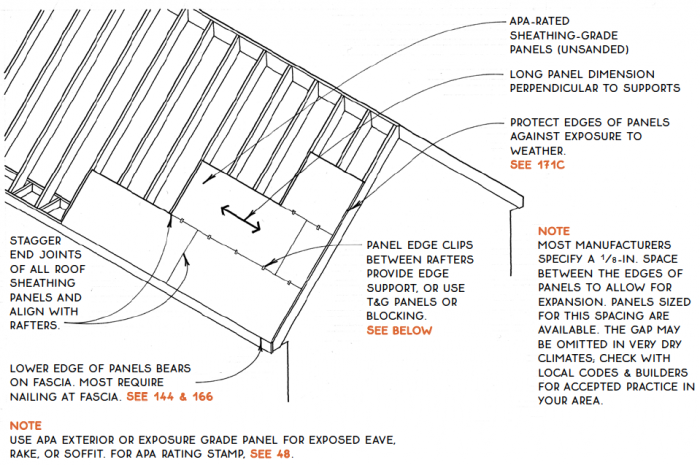 Relative low cost and ease of installation make plywood or OSB panels the sheathing of choice for most modern roofs. The system provides a structural diaphragm and is appropriate for all but wood shingle or shake roofing, which requires ventilation. The standard panel size is 4 ft. by 8 ft., so rafter or truss spacing that falls on these modules is most practical. Care must be taken to protect panel edges from the weather by the use of trim or edge flashing. Sheathing at exposed overhangs must be exterior or exposure 1–rated and must be thick enough to hold a nail or other roof fastener without penetration of the exposed underside.

Standard recommended fastening is 6 in. o.c. at edges and 12 in. o.c. in the field (6 in. in the field for supports at 48 in. o.c.). For sheathing spans greater than 24 in., tongue-and-groove edges, lumber blocking, or panel edge clips are required at edges between supports. Use two clips for spans of 48 in.

Values in the table are based on APA-rated panels continuous over two or more spans with the long dimension of the panel perpendicular to supports. Verify span with panel rating.

Spans are based on a 30-lb. live load and 10-lb. dead load, the minimum rated by the APA—The Engineered Wood Association. Check local codes and with design professionals for higher loading, such as greater snow loads, or heavier dead loads, such as concrete tiles or other heavy roofing. These ratings are minimum. For a more solid roof, reduce spans or increase thickness. 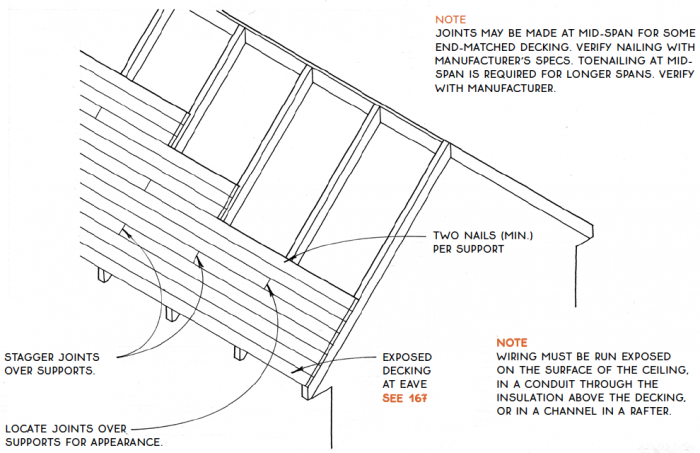 T&G sheathing (decking) is most often used for exposed ceiling applications. It can also be used selectively at exposed eaves or overhanging rakes. Rafters are spaced at wide centers since the decking will span more than 24 in. in most cases (see the table). Because this sheathing material does not provide a diaphragm at the plane of the roof, other means of bracing the roof against horizontal loads must usually be employed. For example, the roof may be braced with diagonal metal straps applied to the top of the sheathing or with a layer of plywood or OSB over the decking.

Insulation for an exposed ceiling must be located above the sheathing. Insulation requirements will vary with climate and with roofing material. Rigid insulation is usually the most practical because of its thin profile, but it is more expensive than batt insulation. Batts are often chosen for colder climates when the thickness of either type of insulation (rigid or batts) requires adding a second level of structure above the decking to support the roof.

The table assumes a 30-lb. live load for Douglas-fir or southern pine species. The table is for comparison and approximating purposes only. The actual span capacity depends on roof pitch, species, live-load values, and end-joint pattern.

The placement of insulation above the structure of the roof that is necessitated by exposed sheathing creates a thickness of the assembly that must be addressed with unique detailing at the edges of the roof (eaves and rakes). The issues are most complicated at the eave where the top of the wall is separated from the insulative layers by the thickness of the rafters. This gap needs to be insulated and spanned with a continuous air barrier. The thickness of the insulation above the sheathing can also be an aesthetic challenge, especially at the eave.

There are several approaches that can be employed, each of which will lead to unique detailing specific to the situation. The simplest approach is to eliminate overhangs (see A in the illustration), in which case the roof plane effectively terminates at the edge of the building, the details are simplified, and the thickness of the assembly is not perceived. More protective of the walls and almost as simple is to add a porch roof at a lower slope (see B). With a porch roof, the thickness of the assembly stops at the exterior wall, and a simpler, uninsulated, self-supporting porch structure (that can be sheathed with the same T&G sheathing as the interior ceiling) extends beyond.

Most complicated is to extend an eave at the same pitch as the main roof (see C). Here there are two basic options. Either the main rafters of the building are extended, or structure extends from the insulative layer. In making this choice, the primary factor will be the appearance of the eave—especially its thickness. Projecting the eave from the insulative layer has the advantages of both raising its height and having more control over the thickness.

Of course, a rake design must be coordinated with whatever eave design is chosen. But this is a simpler issue to resolve because the top of a wall supporting T&G sheathing need not be separated from the sheathing as it needs to be at the eave. 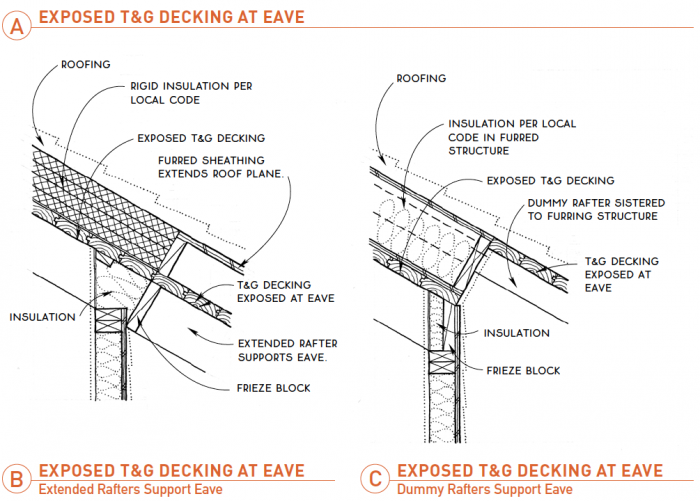 Open, or skip, sheathing is usually made with 1×4 or 1×6 boards nailed horizontally to the rafters with a space between the boards. Since this sheathing material does not provide a diaphragm at the plane of the roof, other means of bracing the roof against horizontal loads must be employed. Let-in wooden bracing or metal strap bracing applied to the top or bottom surface of the rafters will suffice in most cases. This bracing must be engineered in seismic or high-wind zones or for very large roofs. Bracing may sometimes be omitted on hip roofs because the shape of the roof provides the bracing. 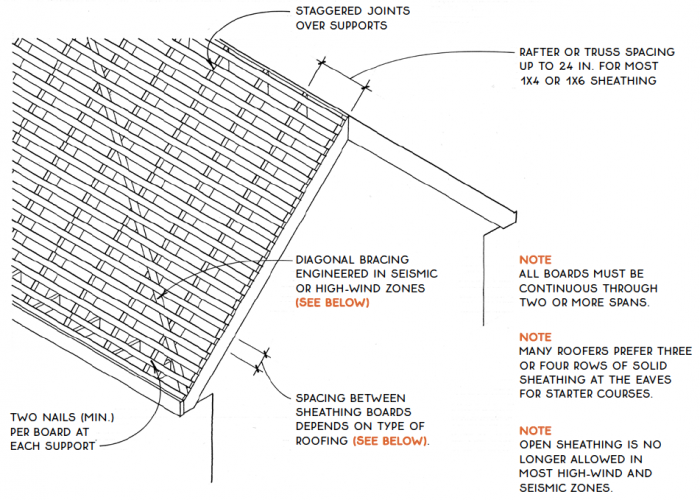 Concrete tiles, depending on the type, may be installed on open sheathing spaced in the 12-in. to 14-in. range. The roofing material is heavy, so 1×6 or 1×8 or 2×4 open sheathing is practical.

Preformed metal roofing is lightweight and runs continuously in the direction of the rafters. In most cases, 1×6 sheathing at 24 in. o.c. is adequate.

Previous: Sheathing a Roof Next: Getting Sheathing Onto the Roof