If you can cut a 2×4 and drive a nail, then you have all the skills you need to frame door rough openings. As with most home-building tasks, however, there’s a fine line between getting it done and doing it efficiently, without causing headaches down the line.

This process works for any project

Whether framing for a door in a new home or on a remodeling project, I follow the same sequence. I always frame rough openings before I install the surrounding studs. This gives me plenty of room to nail the trimmers to the king studs and the king studs to the header. If the wall is load-bearing, I refer to the plans for the proper header size. If not, a 2×4 on the flat replaces the header. In this case, the plans called for a double 2×8 header. I added a 1/2-in. piece of plywood between the 2x8s so that the header width matches the 2×4 stud thickness. 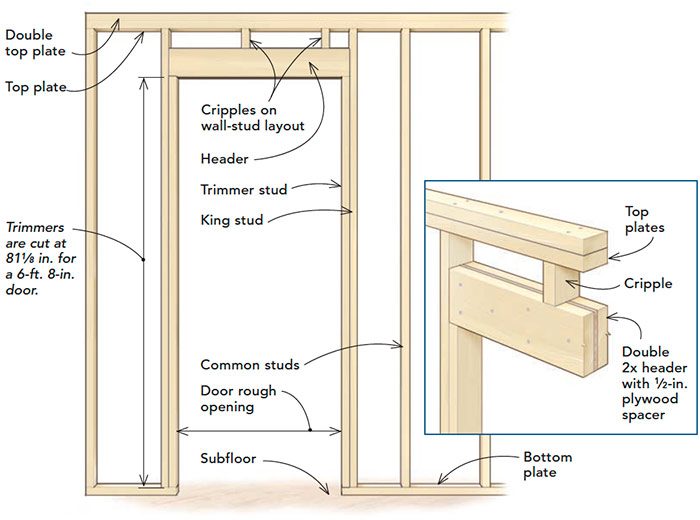 Most new doors are 6 ft. 8 in. tall. Add 3/4 in. for the jamb, 3/4 in. for finish flooring, 3/8 in. for underlayment, and 3/4 in. for wiggle room at the top of the door, and the top of the trimmer (the bottom of the header) needs to be 82 5/8 in. above the subfloor. This height can vary slightly in a remodeling project depending on what’s happening with the existing floors. Door widths vary, but an easy way to size the rough opening is to use the door width plus 5 in. as the distance between the king studs.

1. Mark all the plates at once

2. Assemble the parts, then transfer the layout

Magazine extra: Watch a video of Scott framing this rough opening and hear why he uses a rigger’s hatchet instead of a regular hammer. 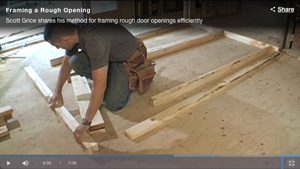 Watch a video of Scott framing this rough opening where he:

Photos by: John Ross, except where noted; drawing by: Dan Thornton

10 Rules for Framing – Veteran framer Larry Haun has been building house for over 50 years. And having started out in the housing tracts of Southern California, he has learned to be as efficient as possible about the process. Here he distills his experience down to 10 fundamental rules.

Troubleshooting a Prehung Door Installation – If you know where things go wrong, you can install a door that will swing the way it’s meant to for years to come.

Plumb Perfect Prehung Doors – Believe it or not, you need the level only once, and that’s before you ever touch the door.

X
X
Previous: How to Frame a Door Opening Next: The Right Header for Every Wall