How it Works: Frost Heave

In cold climates, you need to build driveways, foundations, and other structures correctly to prevent expanding ice and soil from damaging them.

Why do I need to know about frost heave?

In any region where the ground freezes in wintertime, all structures that contact or penetrate the soil–foundations, basements, piers, retaining walls, patios, driveways, and more–are susceptible to damage if they aren’t built properly. Local codes will dictate the requirements, which is one of the primary parameters that will ensure that what you build will stand up to the seasonal cycles.

What exactly is frost heave?

Frost heave occurs when freezing temperatures penetrate the ground, causing subsurface water to form ice structures that displace the soil along with anything that rests on or in that soil. While it was once thought that frost heave happens because water expands as it freezes, the process is actually more complicated, involving not only expansion due to freezing, but also the accumulation of additional layers of ice as liquid water is drawn up from below the frost line.

Water is another requirement, as are subfreezing temperatures that penetrate beneath the surface. The depth to which freezing temperatures penetrate the ground is referred to as the freezing plane or frost front. The depth to which they can potentially extend in any given region is the frost line. Frost lines range from a few inches in Florida to more than 6 ft. in the northern United States.

If not controlled, frost heave can seriously damage buildings and other structures in cold climates. Mitigation typically involves removal of one of the three elements (frost-susceptible soil, freezing temperatures, or water) required for frost heave to occur. Here’s how it works.

When freezing temperatures penetrate the ground, water trapped in voids in the soil forms ice crystals along the frost front. As it solidifies, this water expands by about 9%. In addition, the freezing process desiccates the surrounding soil, drawing unfrozen water from below the frost front through capillary action and vapor diffusion. This water freezes to the ice crystals that have formed above, thickening it to create an ice lens. 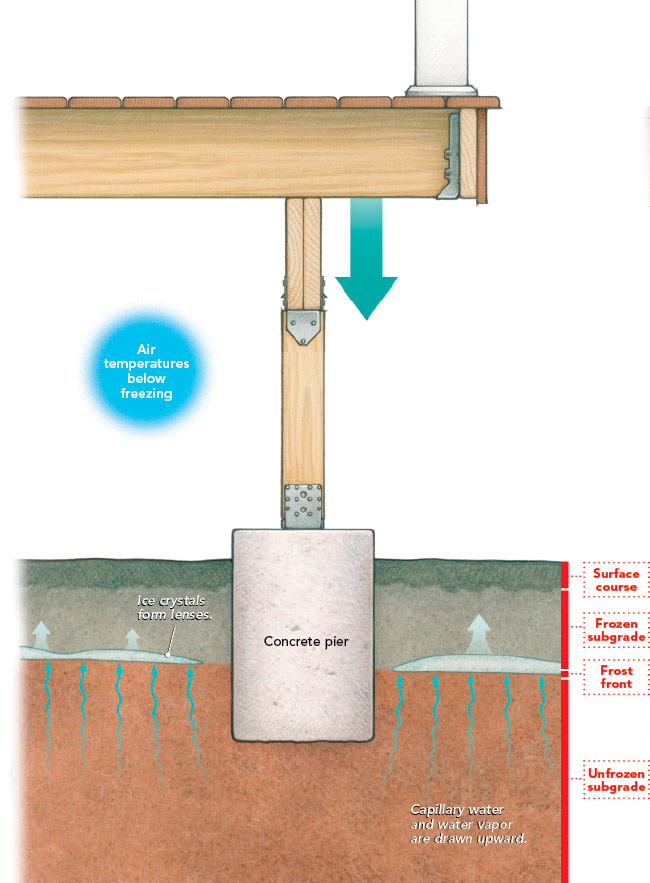 As temperatures change, the depth of the frost front changes, leaving behind a series of ice lenses with layers of frozen soil between. As they grow, these ice lenses may attach themselves to vertical surfaces below ground, an action known as adhesion freezing, or adfreezing. The ice lenses continue to grow in the direction of the heat loss—that is, toward the surface—lifting soil and structures along the way.

When the air warms, thawing occurs from the ground’s surface downward. As the ice lenses melt, water saturates the soil, weakening it. Structures raised by the frost heave slide back down, often resting askew from the combination of weakened soil and shifting load forces above. The cumulative effect of repeated heaving may aggravate the situation, causing a structure to collapse. 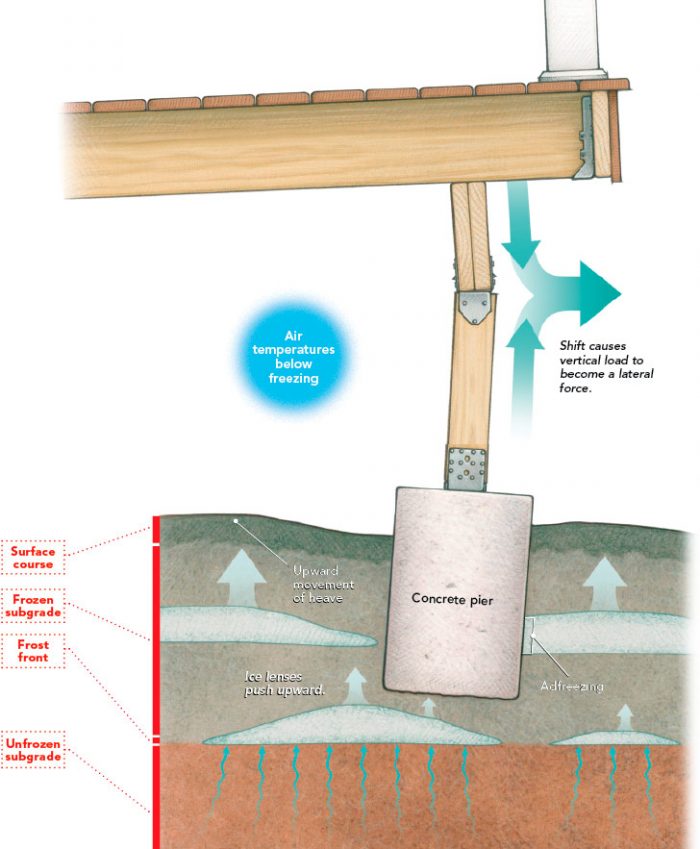 Code mandates that support structures either extend below the local frost line or be protected by insulation so that the bearing soil is not subject to freezing and, thus, heaving. Frost heave also can be controlled by backfilling around piers with gravel to promote drainage, using a sleeve to prevent ice from gripping the concrete, or pouring footing bases that resist upward movement.

The occurrence of frost heave can be minimized by replacing fine-grain, frost-susceptible soil with coarse granular material that is not subject to heaving. Drainage measures can reduce the presence of moisture, which also prevents heaving. Providing a capillary break is another option; interrupting the capillary action that draws water toward the ice lenses can make frost heave less severe.

Frost heave can seriously damage a basement if the ground surrounding that basement freezes to the foundation walls. When this happens, heaving soil around the house can carry the walls with it. This situation does not occur with heated basements, however. That’s because a heated basement (insulated or not) loses heat to the soil surrounding it. This outward heat loss pulls moisture away from the foundation walls. Because moisture is required for adfreezing, less moisture means the frozen soil has a less tenacious grip on the foundation.

Foundations can extend out instead of down

A foundation is one type of structure that allows for an alternative means of protection from forces exerted by the frozen ground. If you can keep the soil around a foundation from freezing, the foundation doesn’t technically need to be built to below the frost depth; instead you can use a detail called a frost-protected shallow foundation. This construction detail usually consists of a monolithic slab with wings of rigid-foam insulation extending out from the edges on all sides, buried just below the surrounding topsoil. Typically the insulation extends the same distance horizontally that the frost depth would require a footing to be down from the surface, but check with your local building officials to be sure.

This method of building a foundation uses less concrete and doesn’t require you to dig as deep of a hole. The insulation around the house might cause conflicts with your landscaping plans, but incorporating hardscaping, decks, or porches that extend past the insulation could counteract that issue.

Previous: Choosing a Deck Foundation Next: A Solid Deck Begins with Concrete Piers