Stout connections and a simple design turn decking and 2x4s into a safe, handsome feature.

Synopsis: In this article, Fine Homebuilding editorial adviser Mike Guertin details code-compliant methods of attaching deck-railing posts using FastenMaster bolts and screws combined with blocking made from framing lumber. It details the construction of a custom wood railing and shows how to make and use an elastic layout template that automatically adjusts baluster layout to fit a variety of railing lengths.

A custom, site-built railing sets your work apart, and it doesn’t take much more effort or materials than an ordinary one. The design I worked up for this small deck uses #1 western red cedar for the 4×4 posts, and #2 western red cedar for the 2×4 horizontal rails and the 5/4 decking for the cap rail and balusters. Clustered in groups of four, the balusters have about 1 in. between them. The wider space between the baluster groups adds interest and is just under 4 in. to comply with the building code. (The maximum opening in a railing must be smaller than 4 in., and the railing must be at least 36 in. above the decking surface.) The horizontal space between the upper rails adds character without requiring many additional materials.

When tested at Virginia Tech about 10 years ago, a lot of common blocking arrangements used to secure railing posts to deck frames failed to meet the 200-lb.-load code requirement and its 250% safety factor. Consequently, when I mount posts, I integrate blocking carefully and fasten it correctly. The HeadLok and ThruLok screws used here are made by FastenMaster. The company also publishes the post details, which it claims meet the IRC’s load requirement.

Finally, because water is the enemy of any wood railing, I implement several details to help minimize its effects.

POSTS ON A CORNER

FastenMaster’s details require screws or bolts to be installed in specific spots, typically 2 in. from the top and bottom of the joists and 1 in. from the edge of the post. (The company has additional fastening information at its website.) Site-made plywood templates with fastener locations on them streamline the layout of screw and bolt locations. When fasteners enter from perpendicular sides, the templates also help to place them at different levels so that they don’t meet in the middle. A plywood box, built about 1⁄8 in. wider than the posts and clamped in place, holds the post at the right height during installation.

POSTS ON AN END JOIST

To securely mount a post to an end joist, use blocking to tie the end joist to the first joist inboard. As with the corner post, a 4×4 block is bolted behind the post, in this case to reduce the chances of the bolts splitting the 2x blocking if the post is subjected to a heavy load.

POSTS ON A RIM JOIST

This post could be placed anywhere between two joists. The rim joist is attached to these two joists with two 6-in. FlatLok screws in each. Blocking behind the post and parallel to the rim is reinforced with more blocking screwed to the joists themselves with 3-in. decking screws.

To ease matching the baluster spacing between sections, the posts on the outside of the deck are spaced equally, as are the posts along the end of the deck. But the distance between the outside posts differs from that between the end posts by about 2 in., so there are two different baluster layouts. The first step in laying out the balusters is calculating the spacing for the longer railing sections. This involves approximating the spacing and then fiddling with the numbers until they work out evenly.

To avoid a noticeable difference in baluster spacing between the railing sections, the spaces between the balusters are microadjusted to hide the 2-in. difference. To do this, I used a template made from 1-in.-wide ribbed nonroll elastic bought for $3 at a fabric store. Because elastic stretches equally along its length, it can be used to lay out baluster patterns on rail sections of different lengths. It changes the spacing proportionately, growing or shrinking depending on the length of the piece being laid out, with no math required.

I like to fasten the preassembled rail sections to the posts from below, hiding the fasteners and making it so that the screw holes won’t collect moisture.

The 5/4×6-decking cap rail runs the length of each side of the deck and is screwed to the posts. Additional 2×4 blocking supports the cap rail between the posts and ensures that the railing height and the space between the cap and the rail below remain code-compliant. All the fasteners are stainless steel to prevent corrosion from weakening the connections and staining the cedar. 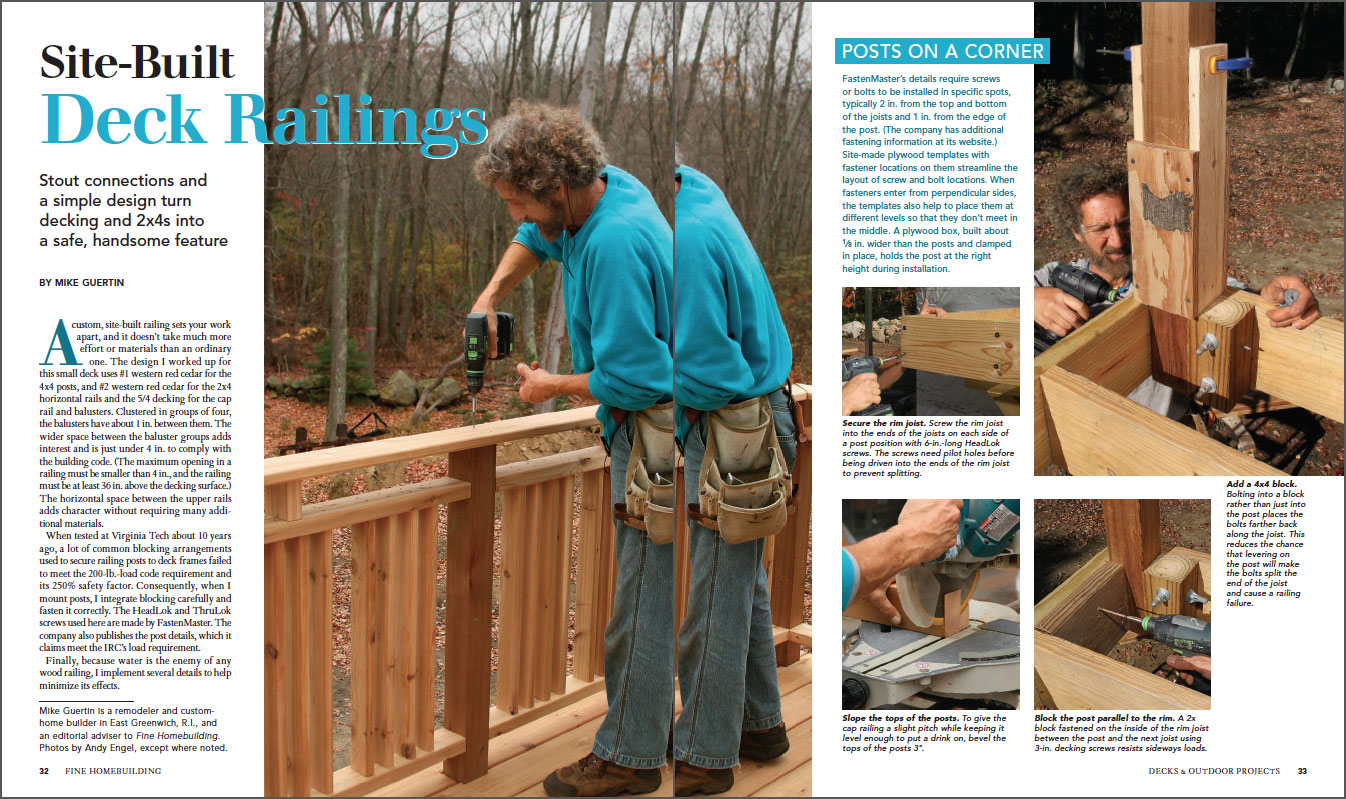 For more photos and details on deck railings, click the View PDF button below.