These specialized products make every phase of deck building easier and more efficient.

Synopsis: As decks have become more complicated, so have the many options when it comes to deck tools. To find out what’s most useful on the job today, carpenter Andy Engel reached out to a number of deck contractors to learn their favorite products. Choices include tools for everything from demolition, to framing, to fastening railing hardware.

I built my first deck in 1986 working out of the back of a Jeep Cherokee. The closest thing to a specialty tool I needed was a ratchet with a 3⁄4-in. socket to tighten the lags holding the ledger in place. Fast forward to 2020, and it seems the average deck contractor needs a 3⁄4-ton pickup to haul a trailer full of tools to even the smallest job. In fairness, decks have become an order of magnitude more complicated since the Reagan administration. Back then, we screwed nothing together, and maybe we used joist hangers, and no matter which of the three decking materials we used (PT, cedar, or redwood), it got nailed down.

Still, it seems like there are more tool options out there today than are strictly needed. In an effort to sort out what’s really useful, I talked to a bunch of deck contractors to learn what they haul to the job every day.

These days, a lot of deck jobs are deck replacements. If the old framing is headed for the trash, most builders cut the decking between the joists with a circular saw and lever out the joists and decking at once.

But if the existing framing is staying, the trick is to tear off the decking as efficiently as possible. Joe Rogers of Advanced Carpentry & Remodeling in St. Louis, Mo., loves the Duckbill Deck Wrecker. Several contractors mentioned Nestorbars. Both tools work on the same principle: Two prongs slip under the decking, one on each side of the joist. With the joist acting as the fulcrum, a long handle provides enough leverage to rip up even screwed-down decking.

No one likes digging footing holes. Nick Markey of N.G. Markey Custom Woodworks in Charlton, Mass., rents equipment to solve the problem. “Depending on the size of the job,” he says, “that can range from a walk-behind Dingo compact utility loader with a bucket and an auger to a compact backhoe. I’ll also rent a two-to-three-bag concrete mixer, instead of mixing in a wheelbarrow.”

Speaking of wheelbarrows, Gary Bruzzese, who owns Craftsman Contracting in Norwalk, Conn., has given up on them. Instead, he uses a Rubbermaid commercial cart. He claims, “It has a bigger capacity than a regular wheelbarrow and is very stable with its two wheels. It’s also big enough to flip upside down and cover up hardware or bags of concrete overnight.”

One tool that nearly every contractor I spoke with mentioned was a green-light laser. They’re great for laying out footings and shooting elevations, among other things, and their green beams are far more visible in daylight than red lasers. Although he’s a green-laser fan, Bruzzese still uses his stringline regularly: “Lasers are great, but even the green ones aren’t visible in full sun. Plus, it’s easy to knock them out of position. I can set up a string and I know it will stay just where I left it.”

Instead of marking cuts and fastener lines with red or blue chalk, which can stain or take a long time to wash away, Ethan Biederman of South County Post & Beam in West Kingston, R.I., uses temporary white chalk or baby powder, which washes away in the first rain.

Although most deck framing is similar to house framing and the basic tools are the same, deck builders routinely cut 6x6s, and a regular 7-1⁄4-in. circular saw won’t get through them in one cut. In fact, they require five cuts—one on each side, and then another with a different saw through the center because the circular sawblade doesn’t reach the whole way. East Greenwich, R.I., builder Mike Guertin simply drags out a chainsaw, either gas or battery powered. He says, “For notching posts, the tolerances aren’t very tight, and a sharp chain gets close enough very quickly.”

Mentioned by multiple deck builders was a hybrid circular saw and chainsaw: the Prazi Beam Cutter. Several mentioned beam saws like the Makita 16-5⁄16-in. Circular Saw, the Skilsaw Sawsquatch and Super Sawsquatch, and the Big Foot. Jon Blakemore of Rappahannock Building & Remodeling in Fredericksburg, Va., says, “The Big Foot will cut a 4×4 in one pass and a 6×6 in two passes. It’s also handy for cutting two-ply headers and double joists.”

Nearly everyone I spoke with is using track saws for decking. The favorites were Makita’s 6-1⁄2-in. Plunge Cut Circular Saw and Festool’s HK 55 track saw (see the cordless version, HKC 55, above). The chief use is for trimming deck boards to length or when using a picture-frame pattern. The field boards are allowed to run long, then the track saw is used to cut them in a straight line. 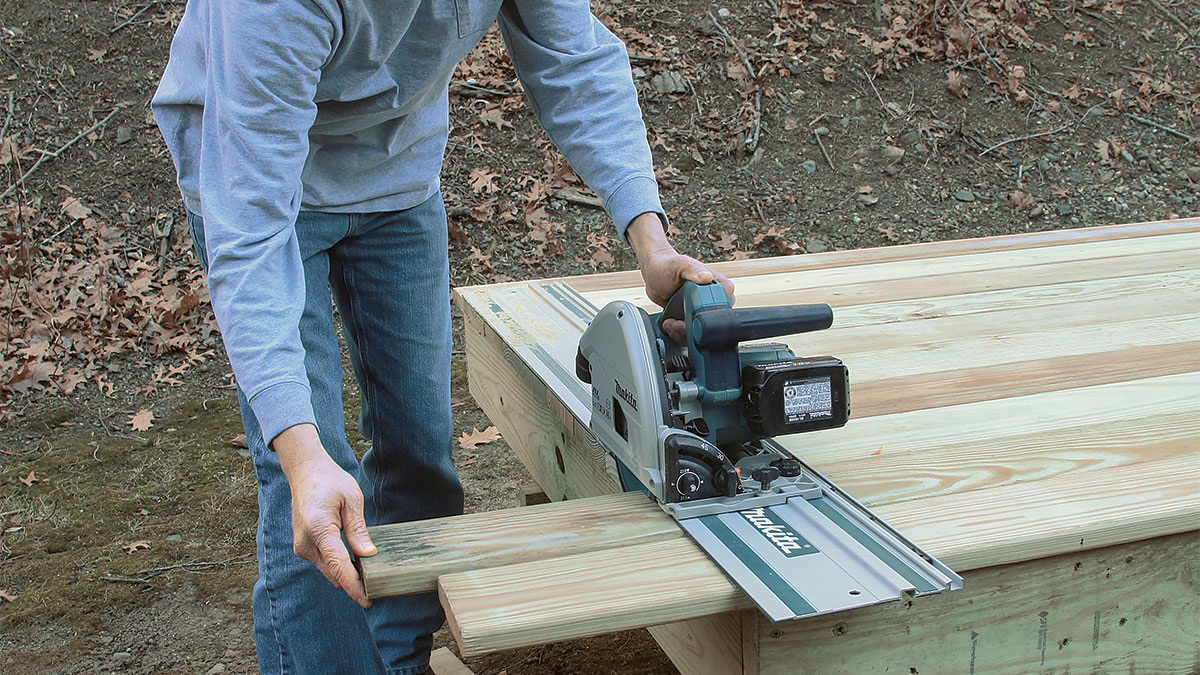 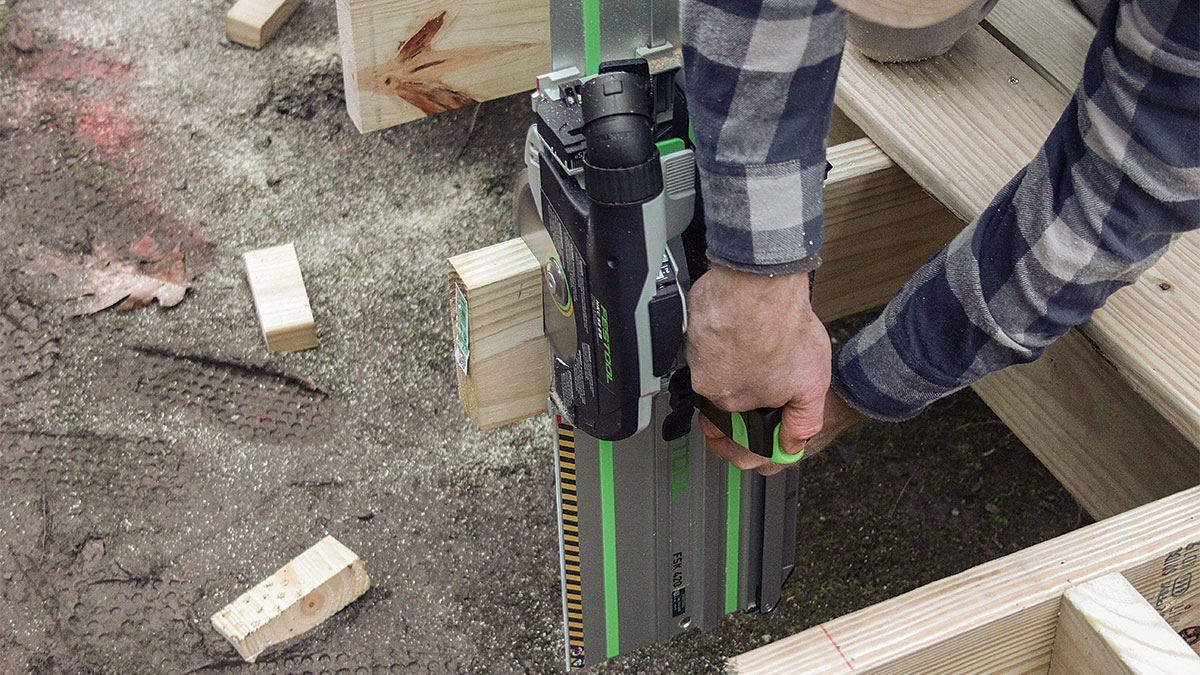 Festool’s HKC 55 cordless track saw came up several times. Although its 160-mm (about 6-1⁄4-in.)  blade isn’t much use on big timbers, it cuts 2x framing lumber just fine. Unlike most track saws, the HKC is meant for crosscuts. It fits Festool’s regular track-saw track, but shines when used with its 16-1⁄2-in. crosscutting track. The saw locks into the track and adjustable stops set the miter angle from 0° to 50°. Bruzzese uses it to cut joists: “I run  the joists long and install the rim joist later. I start laying decking boards, and when I get a few boards  from the outside edge of the deck, I mark the joist length so there will be a full-width deck board at the end. With the HKC 55, I don’t have to draw a square line for each cut. I line up the saw guide with my chalkline and cut the joists to length.”

Bruce Verblaauw, owner of NJ Decks & Railings in Mahwah, N.J., was the first of several builders to mention metal-connector nailers. “We use both the Senco JoistPro250 and the Bostitch StrapShot. They aren’t perfect, though. The Senco is limited to 21/2-in. nails, while the Bostitch shoots only 11/2-in. The Strapshot is great with 12-in.-on-center framing because its housing is smaller. Trouble is, the shear nails on joist hangers have to be 3 in., so we end up hand-nailing, or using a palm nailer.”

When I continued this discussion with Guertin, he mentioned that Bostitch’s F21PL framing nailer has interchangeable tips that allow it to be used as both a regular framing nailer and as a connector nailer that shoots 0.168-in.-diameter nails up to 31/2 in. in length.

Guertin also brought up FastCap’s Joist Clip. The Joist Clip is a spring-steel clamp that holds the hanger on the joist while it’s being fastened, allowing the carpenter to hold the joist with one hand and the nailer with the other. 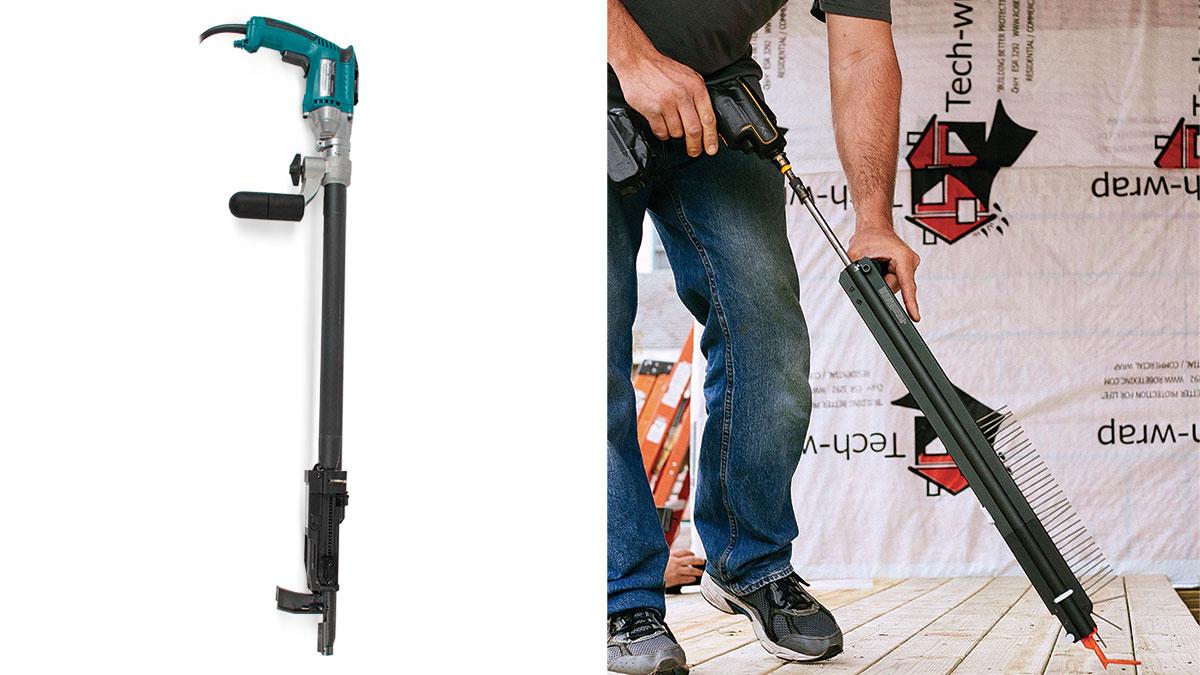 Another approach for aligning face screws with the edge is to use Simpson StrongTie’s Quik Drive screw gun (left). “The Simpson tool has an attachment that spaces the screws a consistent distance from the board edge,” says Guertin, “and the long extension allows you to stand up while fastening down decking.”

For straightening out bent decking boards, Cepco Tool Company’s BoWrench (left) came up again and again. Unlike some other deck-board straighteners, you don’t have to maintain constant tension. This one locks the board in position for fastening. One final decking tip came from Guertin: “Use a dead-blow hammer to engage a deck board onto a hidden fastener. It’s much easier than using a sledge and a block.” 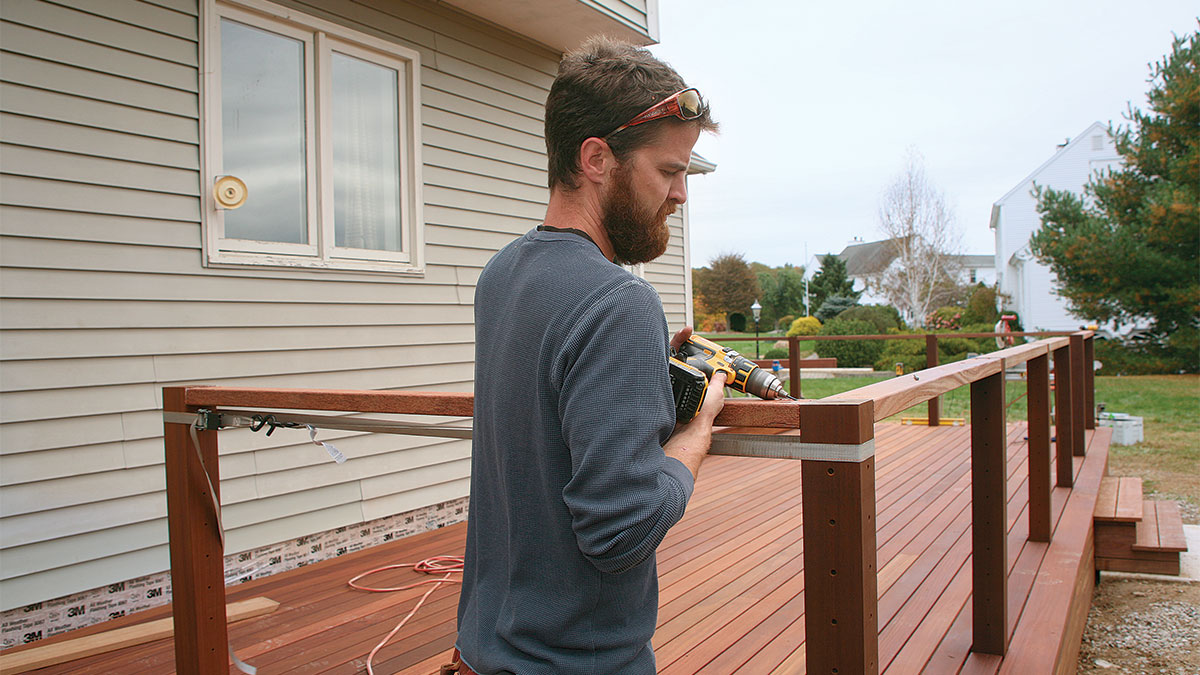 Wood guardrail posts don’t always stay exactly square and true, and sometimes a little persuasion is needed to join sections of railing. For this, Guertin cuts the railing to the exact length and brings the posts tight to it with a ratchet strap. “Not only does this get you a tight joint,” he says, “but it frees up your hands to drive fasteners.”

When using manufactured railings, sometimes the baluster spacing leaves little room for drilling posts and fastening railing hardware. Paul Mitchell, who owns Mitchell Restoration in Torrington, Conn., says that, “A flexible extension bit is a must. I use a Ryobi one. My other ‘must’ tool for railings is a DeWalt right-angle driver. Both let me work in tight spots.”

Get shelter from the storm 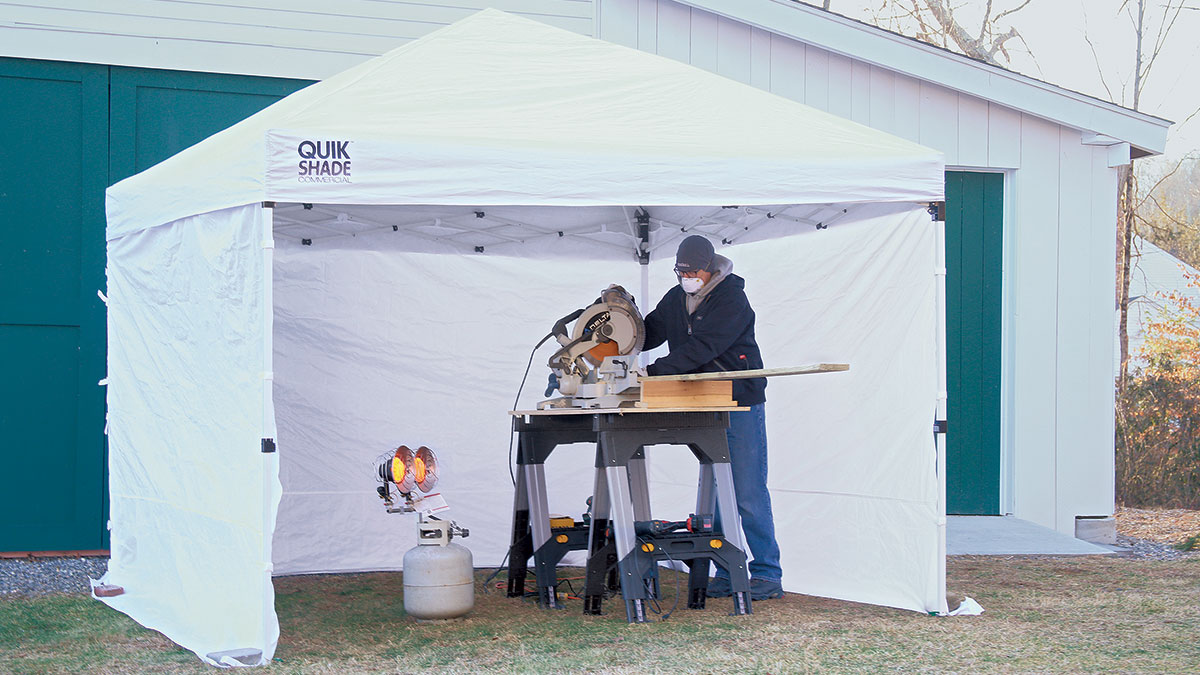 One tool that doesn’t really fit any category—and which may not be a tool, exactly, but is very welcome in northern climes—is a pop-up tent with side panels. Lawrence Winterburn owns GardenStructure.com in Toronto, Ont., and knows a thing or two about working in the cold. “Add a catalytic propane heater inside the pop-up, and you have a warm cut station as well as a comfortable place to bring your fingers back to life in the winter.”

The updates to the articles in this collection are aligned with the 2018 International Residential Code (IRC). Your jurisdiction may use a different version of the code—check with your local building department. You can view the 2018 IRC online for free at codes.iccsafe.org/content/IRC2018. 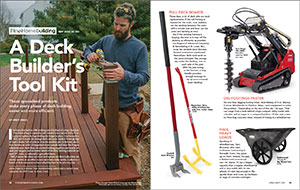