Laying Out the Deck Stair Stringers

For a comfortable stride, plan on a combined unit run and rise of about 18 inches.

The stringer—that notched framing member that supports the treads and risers—is typically made of pressure-treated 2×12. Laying it out is the first, and toughest, step in building stairs.

To grasp the theory behind stairs, it helps to understand some stair-building terms. The depth of the tread (the thing you step on) minus the nosing (the amount the tread sticks out) is the unit run, while the height of the riser (the vertical piece that’s perpendicular to the tread) is called the unit rise. The unit rise should not be more than 7-3/4 in. and the unit run should not be less than 10 in. For a comfortable stride, the unit run and unit rise should equal approximately 18 in. The method shown here ­applies to a stairway of any size.

It takes a bit of trial and error to come up with a rise and run that meets the criteria above. First, pick a proposed total run—approximately how far from the deck you want the stairs to land. In the example shown here, a total run of 10 ft. would put the bottom of the stairs at about the right point on the landing below.

Measure out from the deck to locate the proposed total run, working from the post or posts that will support the stairway. If the stairs are located away from a post, drop a plumb line from the top of the stair header to the ground and stick a nail in the ground to mark this point. Measure out from this point and hold a long 2×4 vertically at the proposed total run. Plumb the 2×4. Standing on a stepladder if necessary, put a line level on a chalkline and stretch the line taut between the top of the stair header and the 2×4. Level the line and mark this point on the 2×4. Measure from the bottom of the 2×4 to the mark. Add in the thickness of your decking material to find your total rise. For the deck shown here, the total rise is 98-1/8 in. 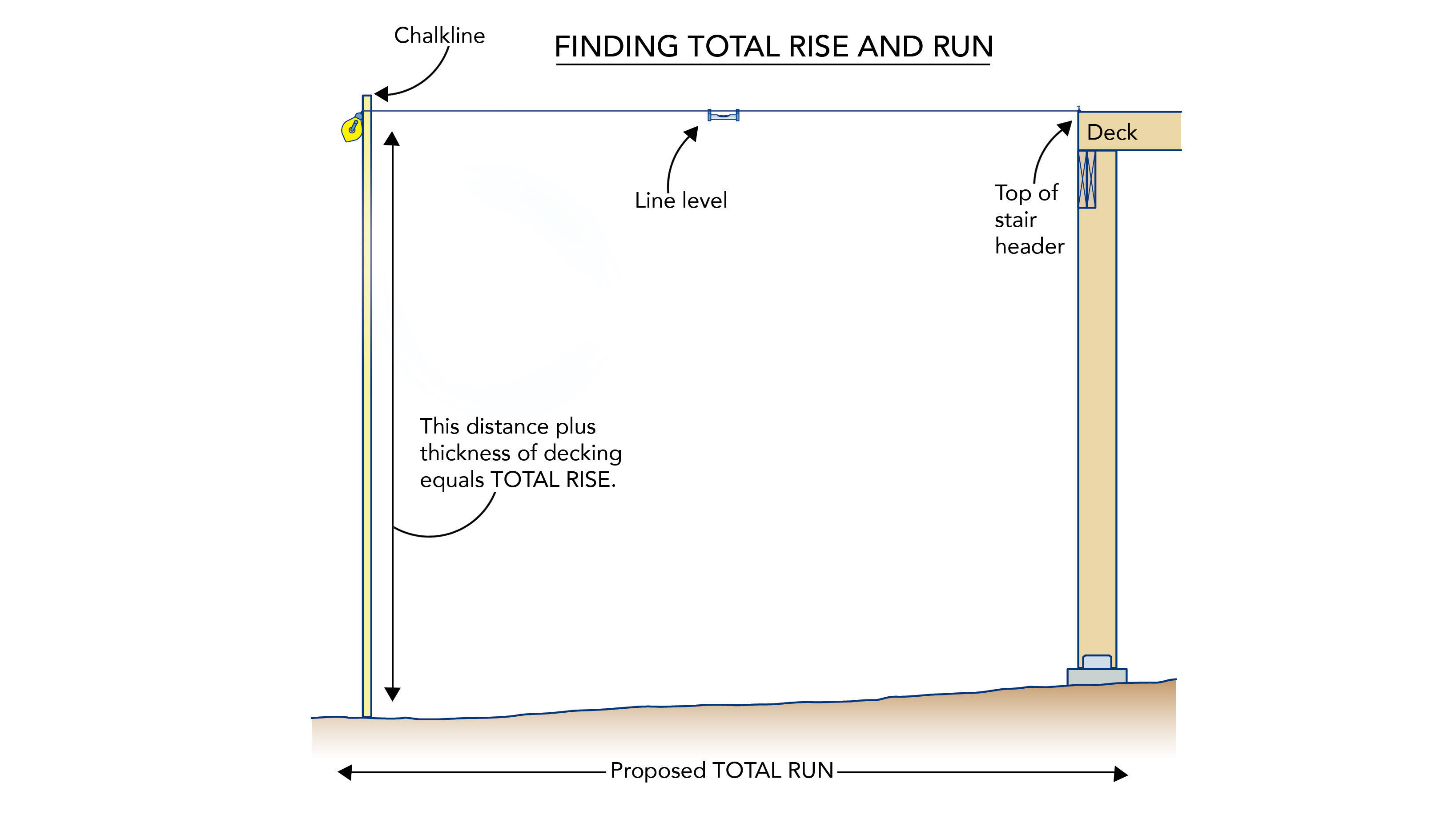 Because you usually have some flexibility in choosing where outdoor stairs will land, pick a unit run that works well with the material you’ll use for the treads. For example, typical 5/4 x 6 decking is 5-1/2 in. wide. Each tread will have two boards for a total width of 11 in. With 1/2-in.-thick composite risers installed behind the treads, the total comes to 11-1/2 in. Subtract 1 in. for the nosing—the amount the lip of the tread extends beyond the riser ­beneath it—and you get a unit run of 10-1/2 in., as shown in the drawing “Laying Out the Stringers.” 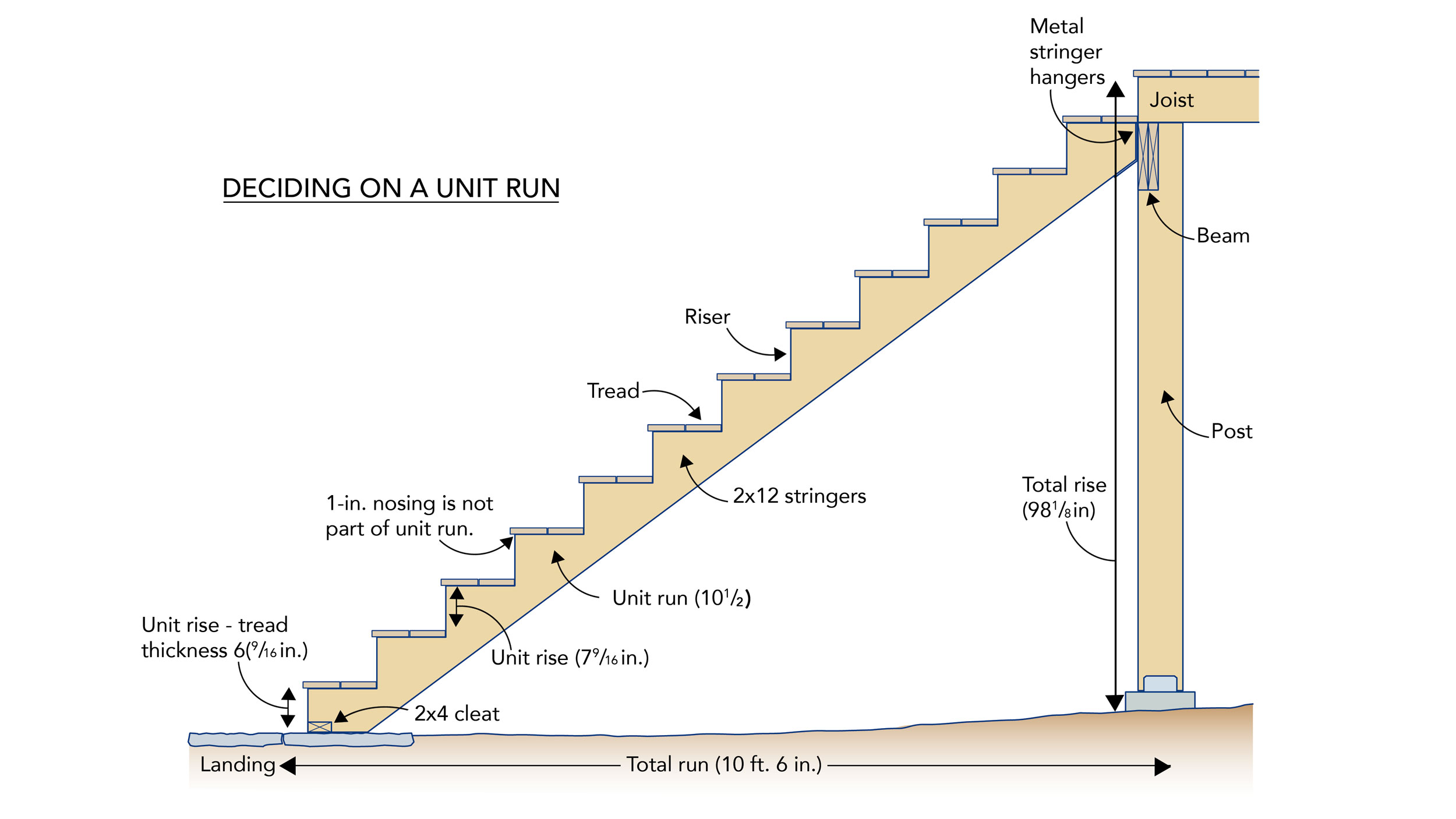 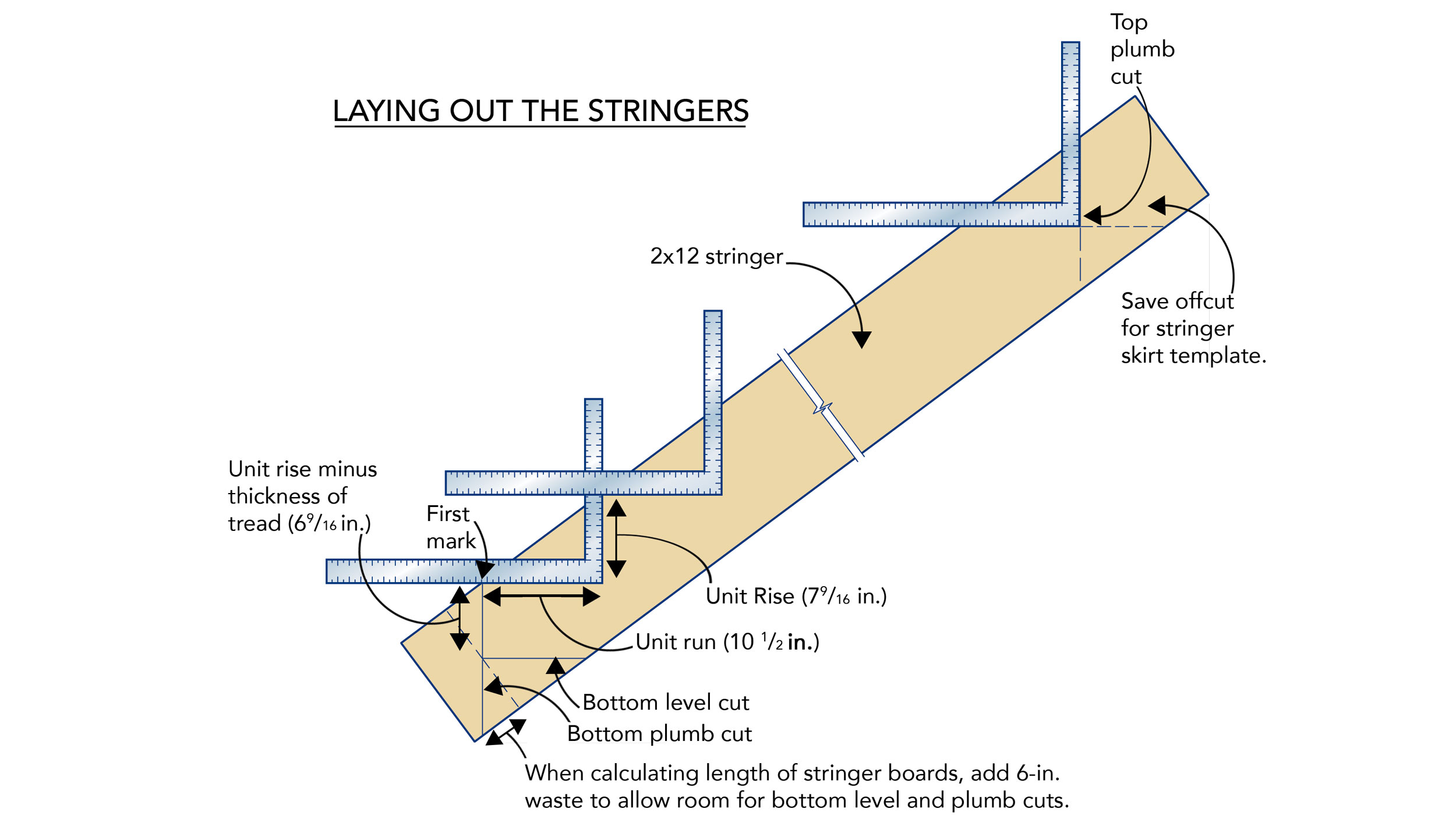 Now you are ready to lay out the cuts on the stair stringer. Lay the stringer board on your sawhorses and make the first mark approximately 6 in. from one end to allow for the final plumb and level cuts. If you make the mark closer to the end of the board, you may not have enough room for the bottom riser.

To lay out the bottom plumb cut, draw a line extending from the first mark, square to the first unit run. From the first mark, measure down a distance equal to the unit rise minus the thickness of your stair tread stock. From this point, draw the bottom level line that is cut square to the bottom plumb cut. Now lay out the top plumb cut perpendicular to the top unit run. Note that when you cut the stringers, you’ll want to save the top offcut for scribing plumb and level cuts when you make the stringer skirts.