How it Works: Deck Loads

Explore the gravitational and lateral forces that conspire to topple backyard decks and the codes designed to counter them.

During 20 years of investigating building and building-component failures, I’ve been involved with a handful of projects where individuals died or were seriously injured. Most of these incidents involved fires and construction accidents. But when you look at those cases in which some component of the structure failed and serious injuries resulted, I’d say poorly constructed residential decks are at the top of the list.

Like any other structure, a wood deck is designed to support applied loads and to transfer those loads to the ground. There are several different types of loads that come into play on a backyard deck, including gravity loads (consisting of live loads and dead loads) and lateral loads. Unless mitigated by proper construction methods, these forces conspire to make a deck collapse. Here’s how it works. 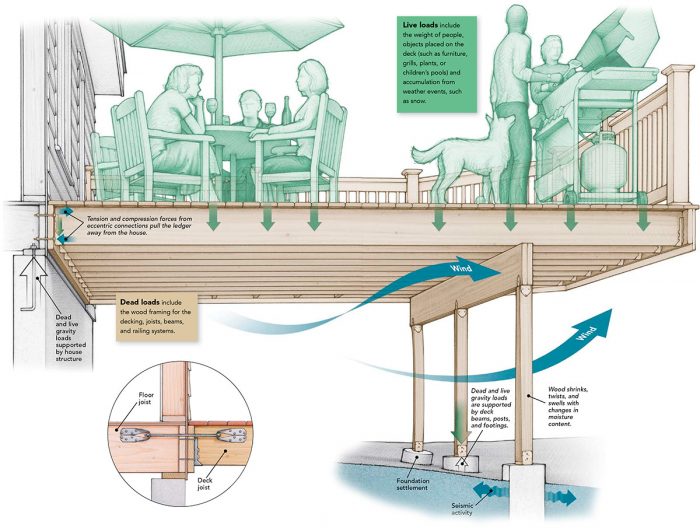 Gravity, or vertical, loads fall into two categories: dead loads and live loads. In general, gravity loads are supported by the deck joists, beams, posts, footings, and the connection to the house. When designing a deck, both types need to be considered: The dead load is calculated as the actual weight of the building materials used to construct the deck; the live load must be at or above the minimum design load of 40 lb. per sq. ft. set by the IRC. Higher loads should be used if a hot tub or other heavy items are going to be placed on the deck. One awful deck failure that I investigated occurred during a cookout where friends and family were having a great time cooking, eating, and visiting, while kids played in a little swimming pool on the deck. The whole gang went tumbling down when the poorly constructed connection to the house failed. The primary force at work here was gravity, along with a lateral load component that helped to pull the ledger away from the side of the house.

Lateral loads are the forces that cause decks to shift horizontally, away from the supporting house framing. These forces include wind, differential settlement of soil below foundations, and changes in wood components due to seasonal conditions, such as swelling, shrinkage, and twisting. Eccentricity of ledger connections that is, the downward force of the joists against the joist hangers that causes the bottom of the ledger to push into the wall and the top to pull away is another horizontal force. Human activity on the deck country line dancing, for example also exerts lateral forces. In some areas, seismic events represent a significant lateral load; in fact, the IRC’s lateral load requirement is based on FEMA guidelines for improving homes’ earthquake resistance. Even where seismic events are rare, the IRC requirements for lateral loads are a good idea and help to prevent deck failures from non seismic-loading scenarios. 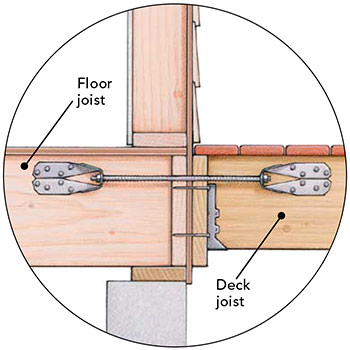 Deck Loads and the Codes

The IRC has taken wood-deck construction seriously and includes prescriptive construction details for supporting gravity loads as well as a prescriptive requirement for lateral loads. Codes applying to ledger attachment are explained further in “Make Any Deck Ledger Secure”. While codes governing ledger attachment address gravity forces, in 2009 the IRC introduced a prescribed lateral-load connection detail (drawing right) to prevent a deck from pulling away from the house structure when one side of the deck is supported by the house. This section of the code requires that decks attached to supporting house structures have at least two connections with a minimum lateral-load capacity of 1500 lb. This regulation applies to decks in all jurisdictions where the code has been adopted. 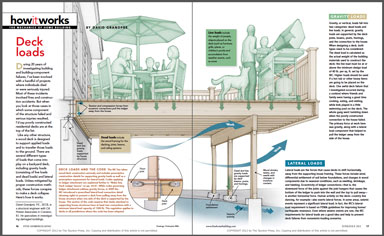 To view the original article, please click the View PDF button below