Check these tables when spacing a ledger off a wall with structural screws.

Many deck builders like to space the deck ledger away from the wall about ½ in. to let water drain through rather than installing flashing. Spacing ledgers off the wall can be a challenge when mounting ledgers to existing homes when the ceiling inside is finished. Since the code only recognizes through-bolting when spacing a ledger off the wall you would have to cut open the ceiling to install the washers and nuts – and then patch the ceiling. But now you can use proprietary structural screws provided the local building official accepts engineering letters from manufacturers.

Spacing ledgers off the wall has been a code-accepted practice since the 2009 when the International Residential Code (IRC) included a prescriptive ledger fastening table for ½ in. lag screws and machine bolts. The table includes ½ in. bolt spacing when the ledger is spaced away from the wall sheathing using stacks of washers. Though the code doesn’t mention it, the plastic Deck2Wall spacers can also be used.

In 2013 Decks Unlimited (maker of the Deck2Wall spacer) had testing done by Washington State University using the original Deck2Wall spacer with lag screws and the new Deck2Wall SWS spacer with Simpson Strongtie’s SDWS structural wood screws. The company provides a fastener spacing table based on the testing and lists both 40 lb. and 60 lb. live load spacing. The screw spacing in the table is much more generous than even the standard ledger-in-contact with the wall fastener table that Simpson Strongtie provides for the SDWS screws. 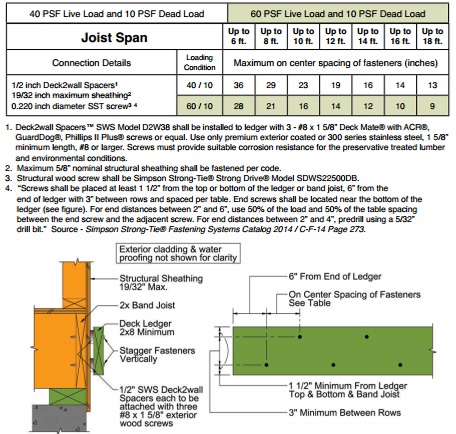 Though the table isn’t listed with an ICC-ES report, many building officials will accept independent testing reports that conform to standards such as the one done by Washington State and the manufacturer’s instructions derived from testing.

In the fall of 2013 FastenMaster issued a Technical Note “Recommendations for using Deck2Wall Spacers with LedgerLOK Fasteners” The note basically blessed the Deck2Wall spacer system when used with LedgerLOKs.  The note didn’t provide a screw spacing table. 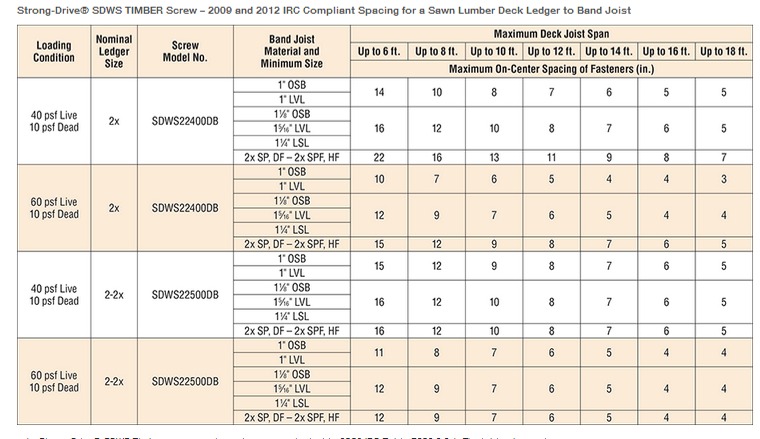 Simpson StrongTie’s Fastening Systems Technical Guide has a section addressing spacing ledgers off the wall with a ½ in. space using their SDWS and SDWH structural screws. The Strongtie letter includes a screw spacer table for 40 lb. live load.  It’s much less generous as the Deck2Wall fastener table; for instance – the Deck2Wall 40 lb. live load table for joist spans up to 16 feet calls for 14 in. fastener spacing while the Simpson StrongTie table lists 5 in. spacing which is just a couple inches less than their table for regular ledger installation.

Previous: Deck Ledger Mounting System for Masonry Veneer (and Other Challenging Cladding) Next: Deck Ledger Bolting by the Code