A Porch with a Rooftop Deck

Designer Michael Maines identifies 12 areas to focus on when designing a porch with a deck above it.

Covered porches are great places to enjoy the outdoors while being protected from the weather. The views, however, are often better from the porch roof. If built properly, the porch structure is substantial enough to support outdoor living space above, so why not take advantage of it and build a rooftop deck? In “Decking Over a Roof” (FHB #246), Emanuel Silva shows how to build such a structure. Here, I show how to get the design right. To illustrate the rules of thumb I follow, I’ve designed a porch and deck for a one-and-a-half-story farmhouse, a home that’s popular in many parts of the country. As with any other project, the ideal situation doesn’t always exist, so I offer some alternatives where appropriate. 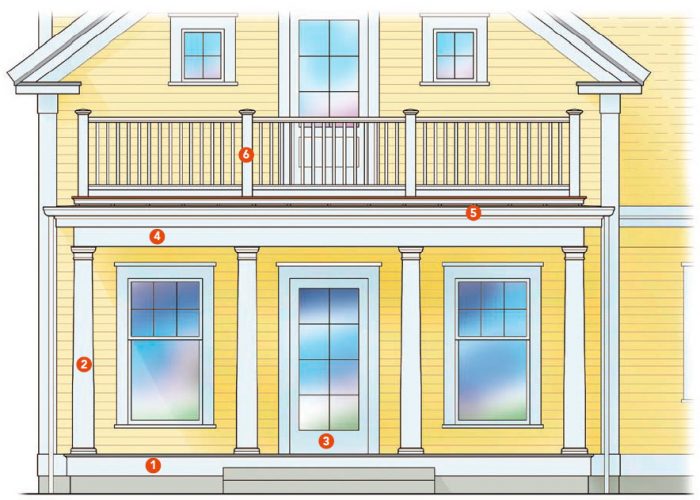 1. Layout— Long, shallow porches typically look best. A depth of 8 ft. is a comfortable target. However, porches deeper than 8 ft. should be given boxy, roomlike dimensions instead—10×14 or 12×16, for example.

2. Columns: size and shape— Don’t be afraid to use generously sized columns, but keep in mind that square columns appear wider than round columns because of their diagonal cross section. Round or turned columns usually look best with a gentle curve that narrows at the top, referred to as an entasis. Square columns can be straight, have entases, or be tapered.

3. Columns: spacing— Place columns so that they create an opening that relates to the shape of the house. For example, a tall, narrow house looks best with closely spaced columns that create vertically oriented rectangular openings. Try to keep the columns evenly spaced and with an odd number of openings. Align these openings with windows and doors when possible.

4. Beams— The beams, more correctly called lintels, should match the width of the top of round columns. If square columns are used, the beam can overhang the columns slightly; in this case, the beam should extend beyond the columns 3/4 in. on each side. In general, the face of the beam should be about one-and- a-half times as tall as the beam is wide.

5. Gutters— The roof can drain into conventionally installed gutters or concealed gutters built into the roof, or the runoff can be allowed to spill out freely and be picked up (or not) by ground gutters. In warm climates, internal drains may work, but they’re not recommended in cold climates, where they may clog with ice.

6. Posts— Railing posts should be one-half to two-thirds the width of the columns. Posts should align with the columns below and have similar or less-elaborate trim. Match square columns with square posts. If the columns are round, the posts can be round or square. 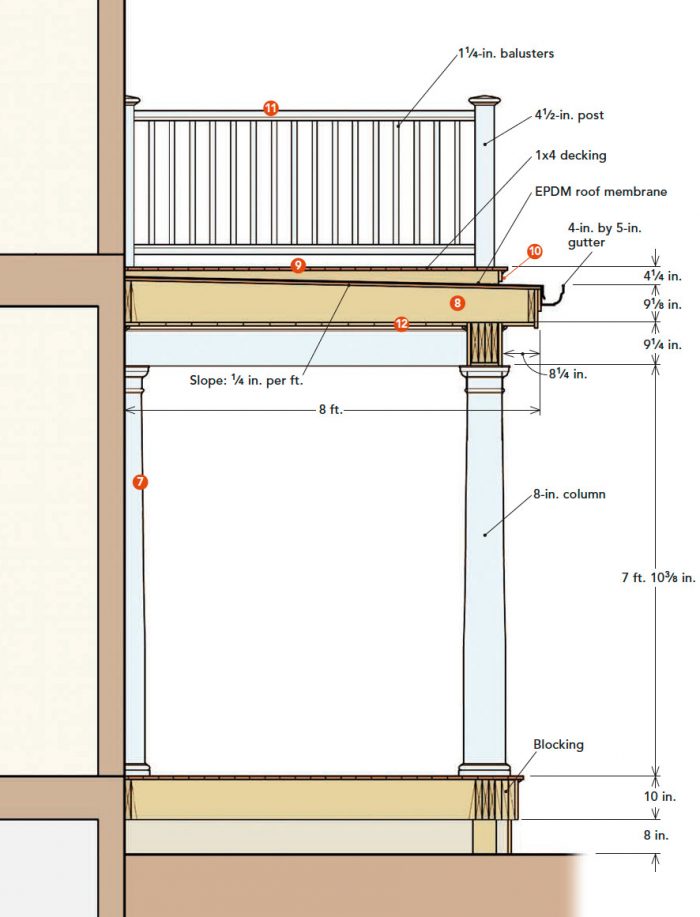 7. Pilasters— The beams supporting the roof and the deck above can be supported visually by pilasters where they meet the house, or by freestanding columns placed a few inches away from the siding. Pilasters are more classically correct.

8. Roof— The roof should be sloped at least 1/4 in. per ft. It’s common to put a deck above a low-pitched shed roof. However, if the roof is deeper than 4 ft., it typically looks better to create a shallow hipped roof so that the eaves on all three sides are a consistent dimension.

9. Decking— The deck boards should be attached to pressure-treated 2x sleepers, tapered to offset the roof pitch so that the deck surface is level. If the deck boards are installed as removable panels, cleaning the surface under them is much easier.

11. Railings— If the porch below has railings, match them or use a scaled-down version of them above. If the porch has no railings, the deck railings should be as visually light as possible. Where the railing meets the house, there should be a wall at least as tall as the railing. The railing can terminate directly into the wall, but it looks best when it ends at a postlike pilaster or a post held 2 in. to 3 in. from the siding.

12. Ceiling— Ideally, the porch ceiling is in the same plane as the porch-roof soffit. The depth of the porch-roof overhang should match the overhang on the house or be reduced by one-third.

Previous: Second-Story Decks Next: How Big Should Your Deck Be?