Building a Pergola: Prepare and Install the Slats

Use spacers and string lines to set the ripped 2x spacers atop the pergola.

You’ll make the 26 slats that provide the shade for this pergola by ripping 16-ft. 2x4s in half along their length. Before you rip them, you’ll cut the 2x4s to length and add a simple decorative chamfer to both ends of 24 slats. That way, you’ll make each crosscut 12 times instead of 24 times. Two slats will be cut to length to fit between posts.
Once all the slats are made, you’ll install one slat on each end of the pergola and run a string between them so you won’t need to measure the overhang for each slat. You’ll cut a couple of spacers so you can gauge the spaces between slats without measuring. You’ll install each slat with one 2-in. screw into each joist. You’ll measure and cut the two slats that butt into the inside of the posts, then you’ll finish up by making four separate overhang pieces to butt into the outside of the posts.

Tip: If you are using lightweight sawhorses like the ones shown here, put some weight on them so they won’t tip as you make the rip cuts. Here, we borrowed a couple of pavers from a patio that was being installed along with the pergola. 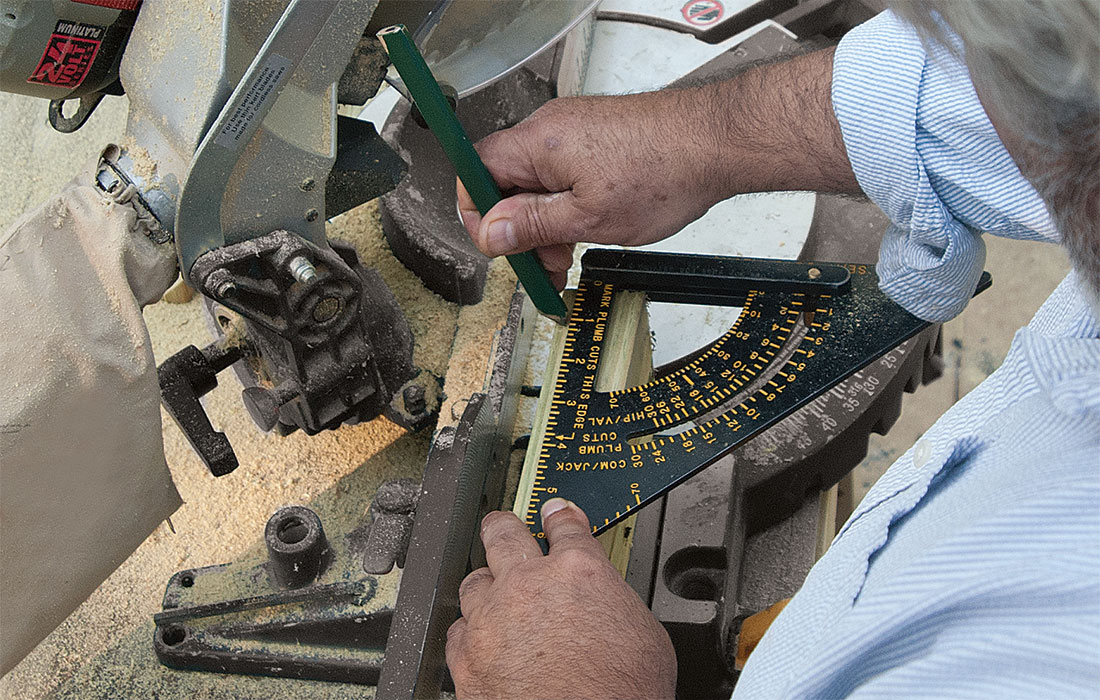 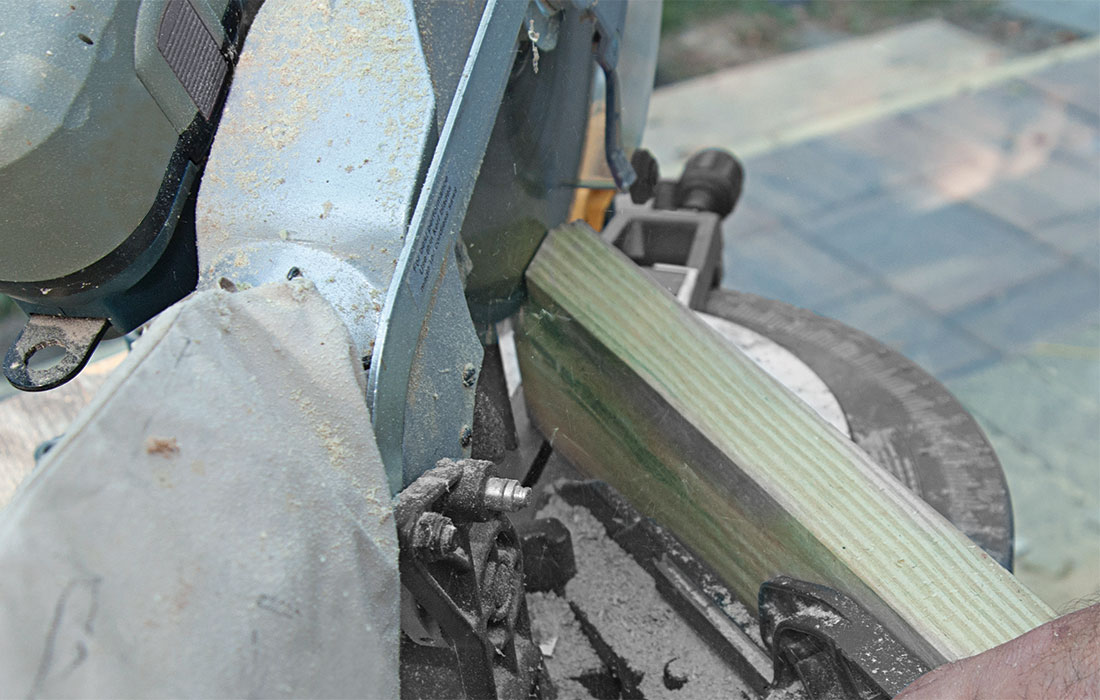 2. Cut the chamfers. Set the miter saw to 45 degrees and cut the chamfer along the layout line as shown. Put the other end of the board on the saw table and make a square cut 182-1/2 in. from the long end of the first chamfer. Then lay out and cut the second chamfer, making sure the long ends of both chamfers are on the same face of the board. Repeat steps 1 and 2 for 12 of the 13 boards. 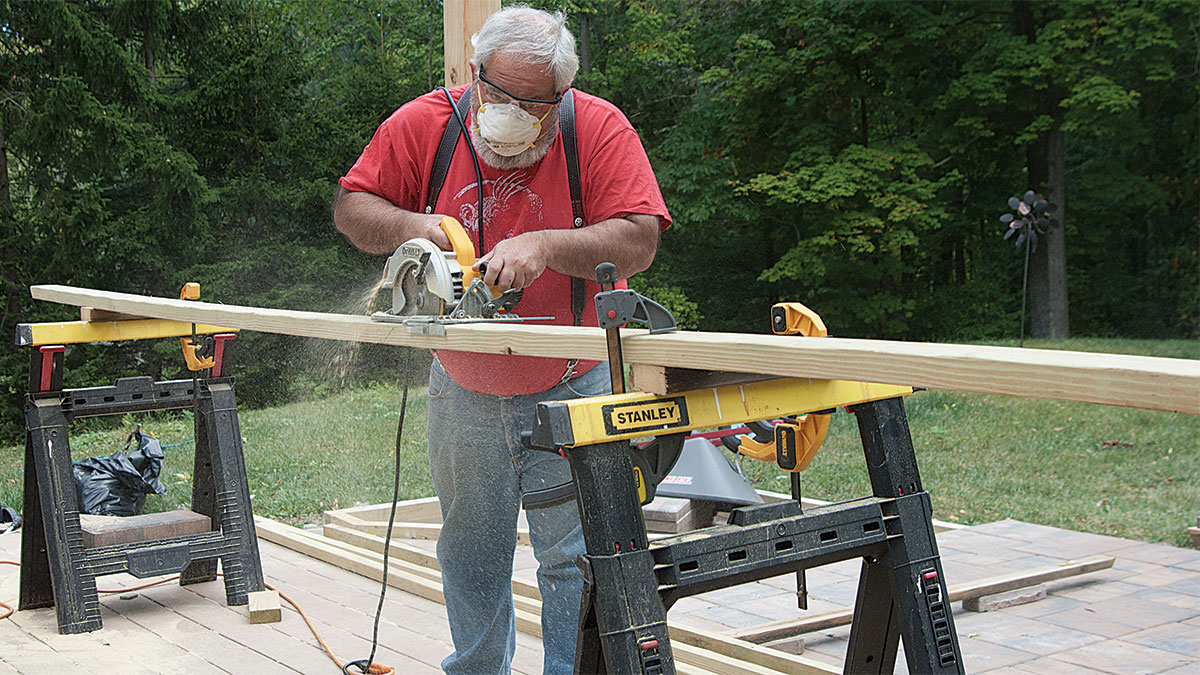 3. Rip the slats to width. At the end of one slat, make a mark at 1-3/4 in. across its width. Put a rip guide on the circular saw and position it so the blade will cut through the mark. Set the saw to cut about 2 in. deep. Clamp a scrap of 2×4 atop each horse so the saw will cut into the scrap instead of the top of your horses. Place the 2×4 slat stock atop the scrap with a few feet overhanging the side of each horse. Clamp one end of the stock to the scrap and start ripping from the other end. When you reach the clamp, reposition the board with the cut past the clamp and complete the cut. Rip all 13 of the 2x4s. 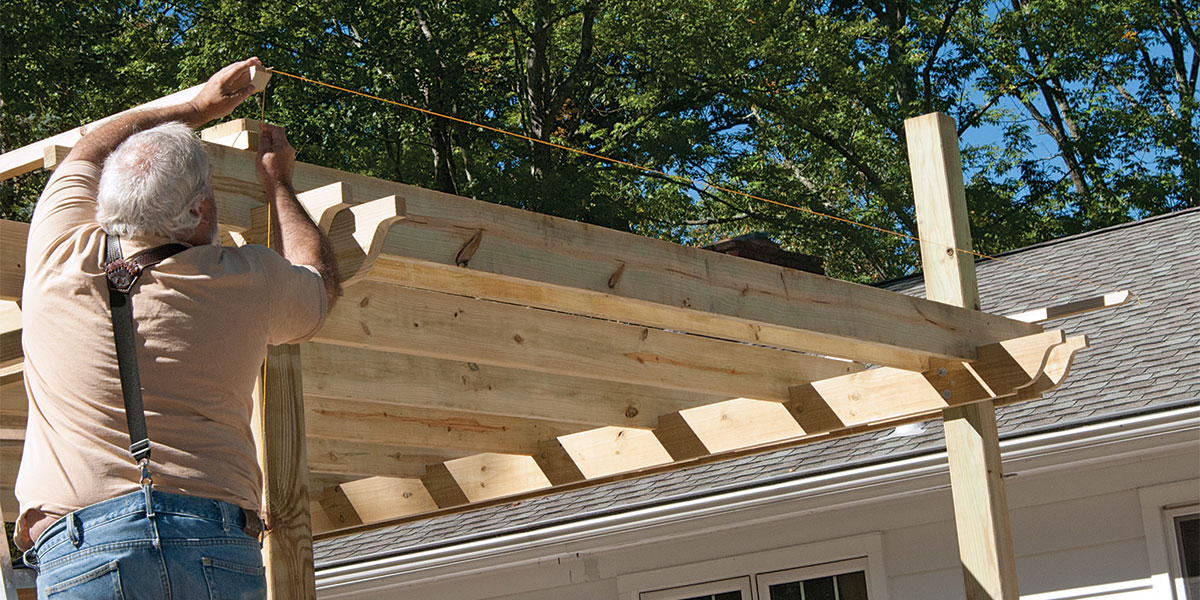 4. Install the end slats and guide string. As mentioned, the slats will overhang the joists by 15 in., so make a mark on the bottom of two end slats, 15 in. from one end. Then mark the top of both end joists 2-1/2 in. from both ends. Align the marks and attach the end slats with a 2-in. deck screw into each joist, checking as you go that the slats are 2-1/2 in. from the end of each joist. Tack a finish nail to one end of each slat and tie a string between the nails as shown. 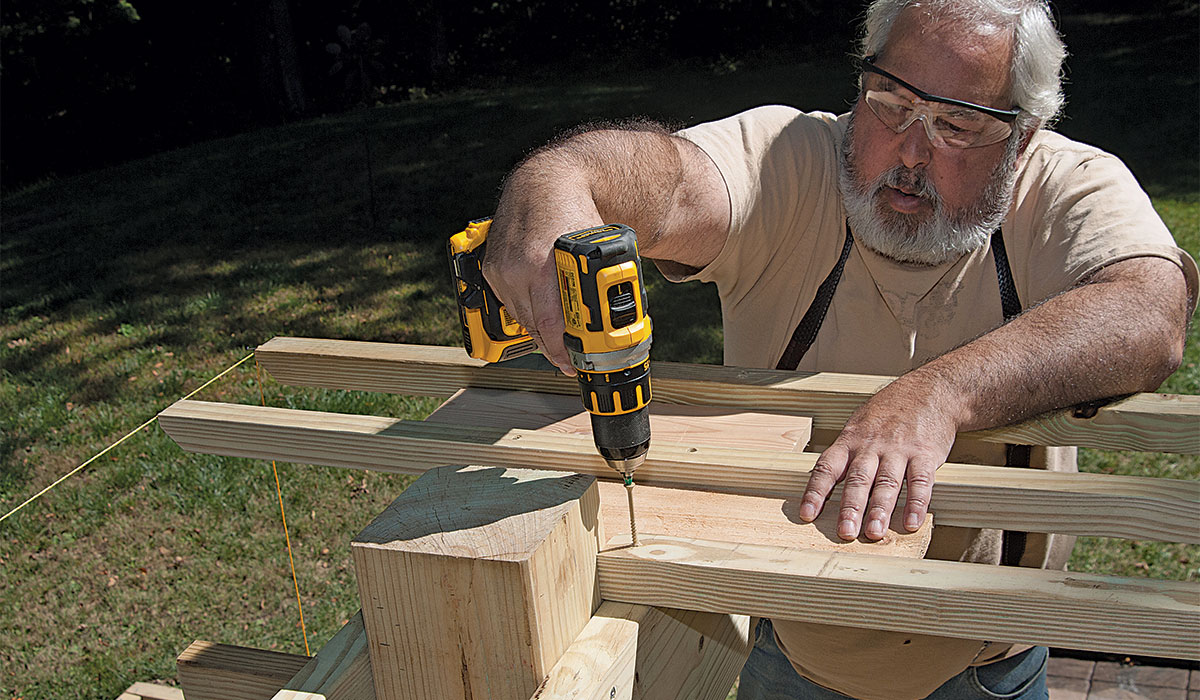 5. Make the spacers and install the slats. Cut two pieces of scrap to 5-1/4 in. to use as spacers as you install the slats starting from one end. (See “Calculating Slat Spacing” if your joists are not 182-1/2 in. long.) Use one 2-in. deck screw into each joist. Depending on the length of your joists, the third slat in from each end of the joists is likely to intersect two posts. Cut these slats to butt between the posts—you’ll cut separate overhang pieces later. “What You’ll Need” gives the theoretical length of these slats, but the distances between your posts will probably vary from that, so measure between posts for a snug fit.

Tip: Tiny spacing variations can accumulate over the course of 26 slats. So when you put the 14th slat in place, check if it is the same distance from the post you are working toward as the 13th slat is from the post you are working from. If the distances vary more than 1/2 in. or so, recalculate the spacing you have left and recut spacers accordingly. 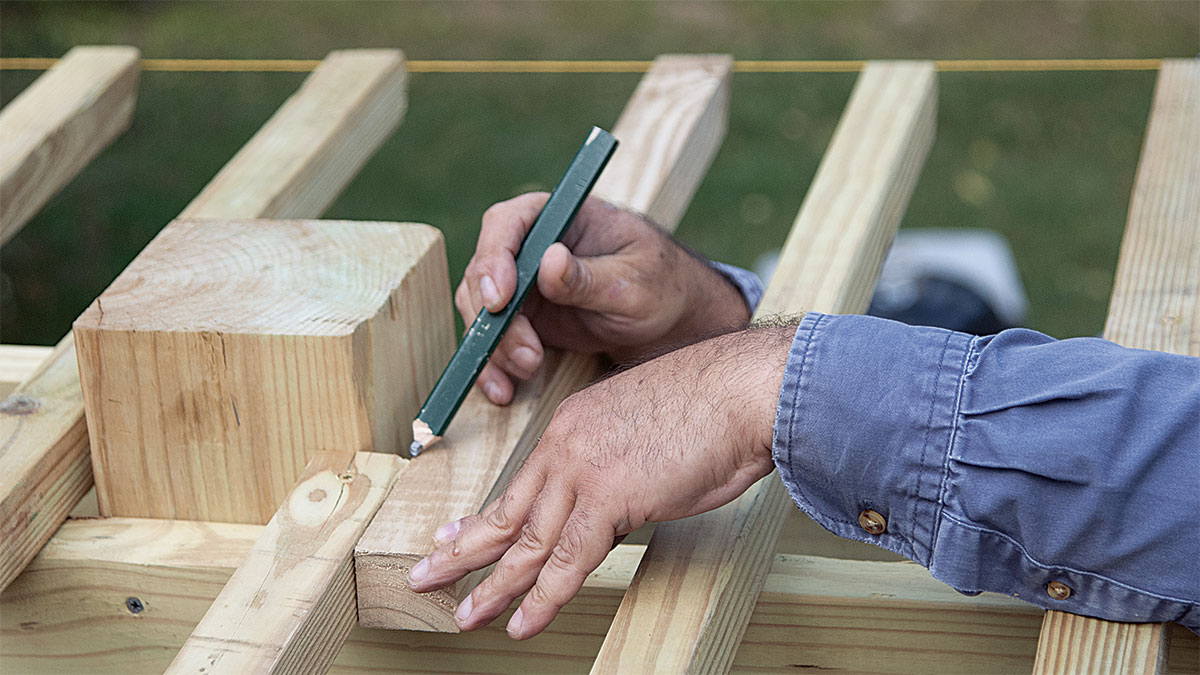 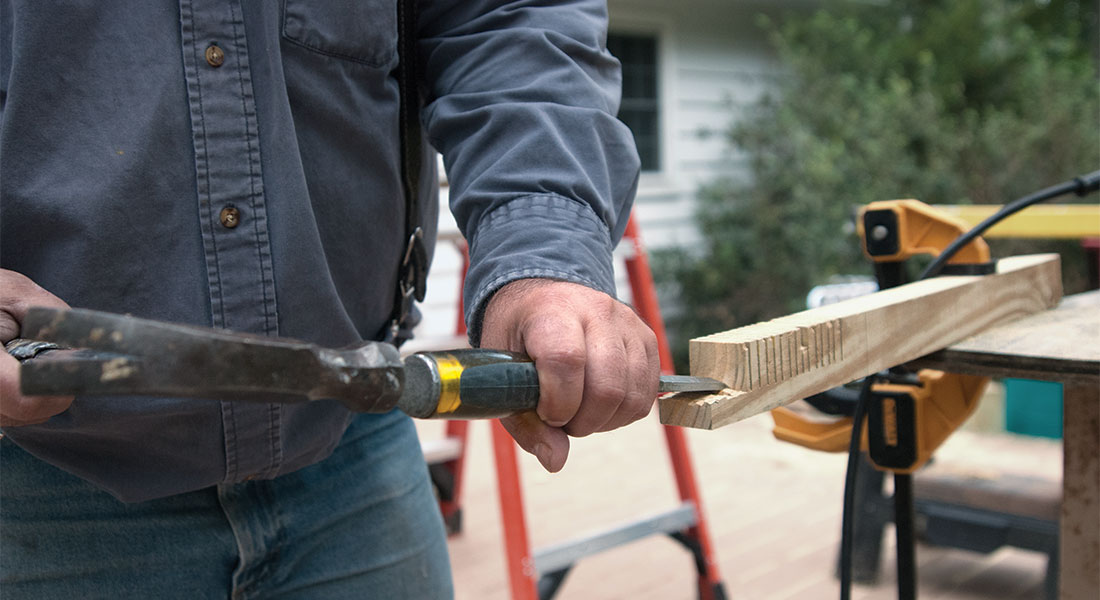 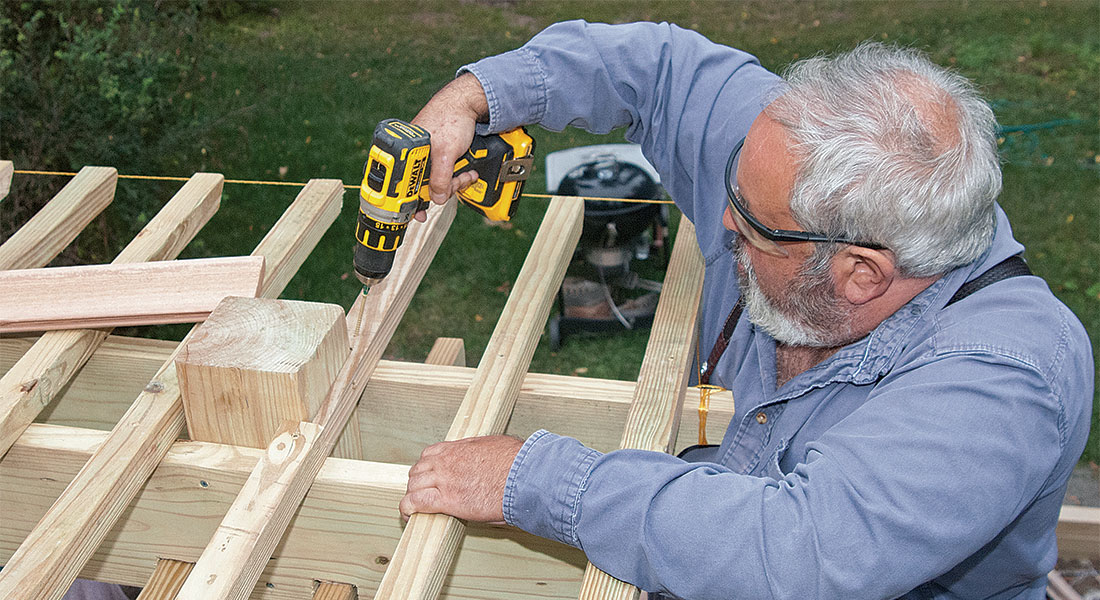 10. Install the overhand pieces. Put each overhang piece in place and install it with one 2-in. screw into the post and one into the joist.

Previous: Building a Pergola: Install the Joists and Cut Off the Posts Next: Bright Ideas for a Well-Lit Deck