The AWC's alternative decking code takes the guesswork out of building a sturdy deck.

Deck codes have evolved since I built my first deck in 1986. Back then, codes largely ignored decks, and both pro and DIY deck builders got away with details that seem downright dangerous in retrospect. Some municipalities still allowed decks to be built from untreated lumber. I saw many with joists that had been toe nailed to the ledger rather than connected joist hangers. Lag bolts holding the ledger to the house were optional. The first time a building inspector mentioned to me that he wanted to see lags fastening the ledger, I asked about size and spacing. His answer was something like, “Well, how about some 5/16-in. lags every couple of joist bays?” Today’s codes call for 1/2-in. lags spaced according to a strict schedule that requires them to be at least twice as close as “…every couple of joist bays.” It was very common for railings to be held in place by nothing more than nails. I saw several decks attached to brick veneer, a major code violation today.

We’ve come a long way, with both the International Residential Code (IRC) and the American Wood Council’s alternative decking code, the DCA 6-12, addressing all of those issues. The idea of an alternative code might surprise a lot of people. Code is code, right? Well, not really. Most builders and many DIYers are familiar with the IRC, the most common residential code in America. It’s mostly a performance-based code, which means that it sets minimum standards but leaves it to the designer to figure out how to meet them. I say “mostly” because it does offer up details such as joist spans and fastener schedules, which if used as prescribed will meet the intent of the code. But the designer has the freedom to come up with alternative details, which building inspectors have the discretion to accept or reject. Often, acceptance hinges on having an engineer design the detail.

The DCA 6-12 is an alternative to the deck provisions in the IRC. The American Wood Council creates the design standards for wood construction that the IRC relies on. Consequently, the DCA 6-12 is widely accepted by building inspectors. Unlike the IRC, the DCA 6-12 is a prescriptive code. That is, it essentially says, “Build your deck this way.” For most decks and most deck builders, that’s a good thing. The engineering is done, and if you follow the code’s details, you’ll build a safe, code-compliant deck. It is limited, however. For example, it specifically excludes decks that will see snow loads greater than 40 lb. per sq. ft., multi-level decks, decks with concentrated loads such as hot tubs, and decks that require particularly tall posts (there are no provisions for posts over 14 ft. high). Nonetheless, it covers the vast majority of decks people will build. It’s got great detail drawings and tables that don’t leave designers-who might be contractors, homeowners, or architects-guessing at anything. And, it’s free. I’m a fan, and I wish it had existed when I was building decks. 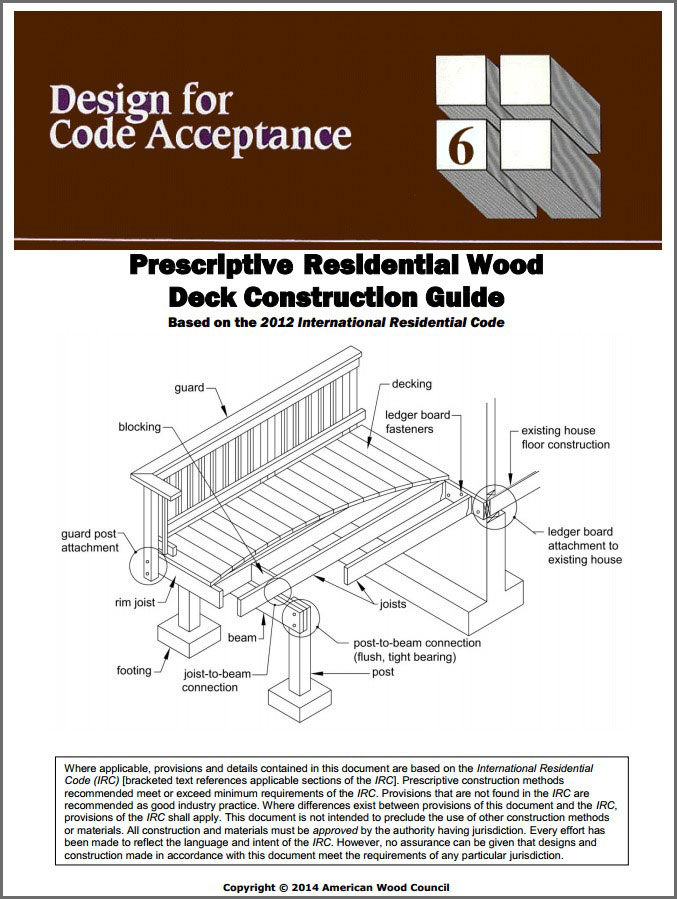 Previous: A Homeowner’s Guide to Deck Permits Next: Why Decks Fall Down