An Elegant Border for Your Deck

Synopsis: When you’re building a deck, you need to pay attention to the fasteners. When you’re using beautiful wood, you might learn from the lessons John Michael Davis shares from his experience building an ipé deck with hidden fasteners. Davis chose hidden fasteners because he thought stainless-steel deck screws would have detracted from the beauty of the wood. He further enhanced the beauty of the deck and the wood by creating herringbone corners. Davis began the project with two boards in one square corner. He continued by weaving in the herringbone pattern. This article includes a sidebar about the EB-TY hidden-fastener system that Davis used for this project.

There are a lot of parts in a deck, but in the end, it’s the decking that everyone notices. One thing I’ve learned building decks in new Orleans’s brutal climate is that of all a deck’s parts, the decking also takes the most serious beating.

My default method for fastening deck boards is to use stainless-steel screws run in such dead-straight lines that they become part of the design. On this project, however, the homeowners wanted ipé decking, so I decided to upgrade to a hidden fastening system to showcase the wood. I speculated that the time and material expense for using hidden fasteners would not be much costlier or labor intensive than screws. 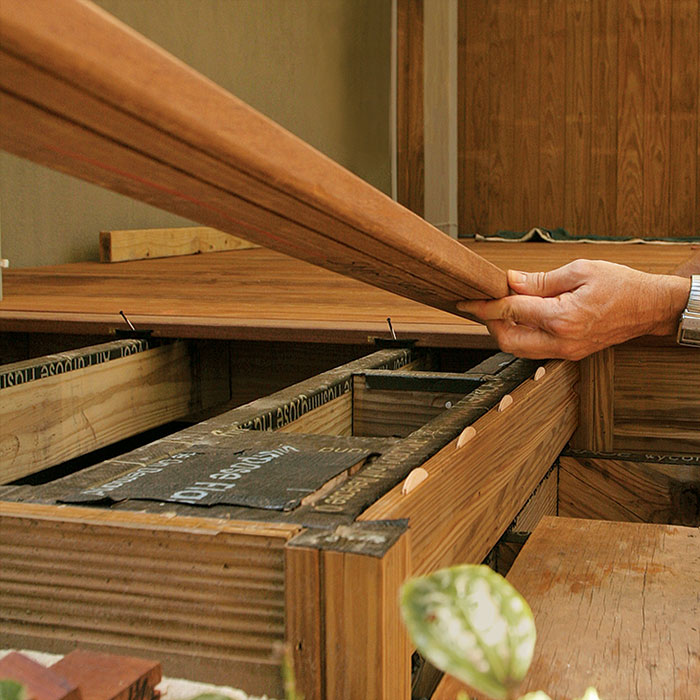 At the time, everything I knew about hidden fasteners came from a Fine Homebuilding article (“Deck-Fastener Options”). I remember being impressed by the EB-TY system (strongtie.com), even in a field of other innovative products, so I decided to give it a try on this project.

EB-TY fasteners come in different sizes for various thicknesses and types of decking. Here, I used the EBE004, which has a built-in spacer of 3/32 in. and is specified for the 5/4-in. ipé I was installing. I made some jigs and took a production-minded approach to installation that kept labor time similar to screwing down the boards. The EB-TY system cost about twice what screws would have, but to me, it’s a good value. There are no fasteners visible, so the deck looks clean and elegant. Also, the top surface remains unbroken, which makes for a more durable board.

Use butt joints outside

During the design, I decided to wrap the rim joists with a 1×10 pressure-treated clear-and-better southern-yellow-pine fascia board. Given the anatomy of this deck, I knew that some lags, screws, and nails would be visible in various places around the rim joist. Because I would need to use stainless-steel fasteners and take extra time installing them so that they looked like part of the design, a fascia board that hides the fasteners seemed like a logical option. This tack turned out to be of dubious economic value when compared with the price of stainless steel fasteners, but it does dress things up.

I also decided to create a border with three courses of deck boards. Framing the perimeter with a border isn’t a new concept, but corners are typically done with mitered joints. In my experience, mitered joints in exterior applications don’t fare well. Wood moves across the grain, so miters are prone to opening. I was wary of this fact even with ipé, which doesn’t move much, and especially with the southern-yellow-pine 1x fascia.

With wood movement in mind, I stuck to square cuts and butt joints for the decking and the fascia. I ran the border around a field of deck boards and, instead of miters, made a herringbone design in the corners. The fascia boards die into corner blocks, which I incorporated into the design. 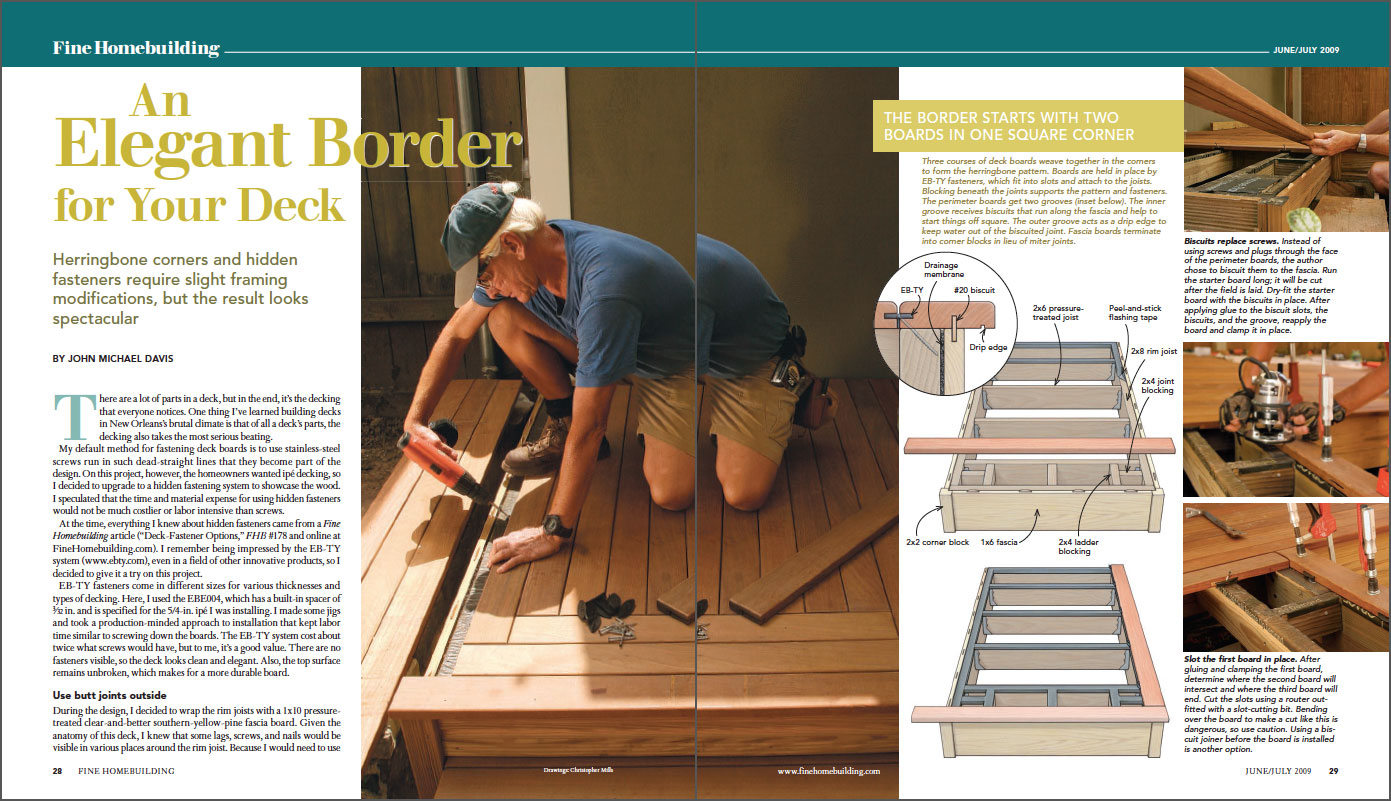 To view the full article, click the View PDF button below: