Framing Stairs to an Out-of-Level Landing

A simple solution to framing new stairs to an out-of-level, 100-year-old patio.

Synopsis: While adding a new deck to the back of this house, the build team ran into the problem of a visibly sloping brick patio where the stairs would land. The clients did not want to interfere with the historical, moss-covered patio, which called for incorporating slope into stringer calculations during framing.

Historic remodels often present challenges that involve plumb, square, and level. On this house, floors and ceilings were out of level up to 4 in. in some areas. When adding a new deck to the back of the house, we also encountered similar issues typical of a home that’s over 100 years old—for example, the visibly sloping brick patio where the stairs would land.

Typically, leveling the landing zone would be a straightforward process: Pull up some bricks, pour a level pad, then reintegrate bricks around the pad. But the clients didn’t want to disturb the historic, moss-covered patio—they wanted the stairs to land on the bricks as if they had always been there. For us, that meant incorporating the slope into our stringer calculation during framing. 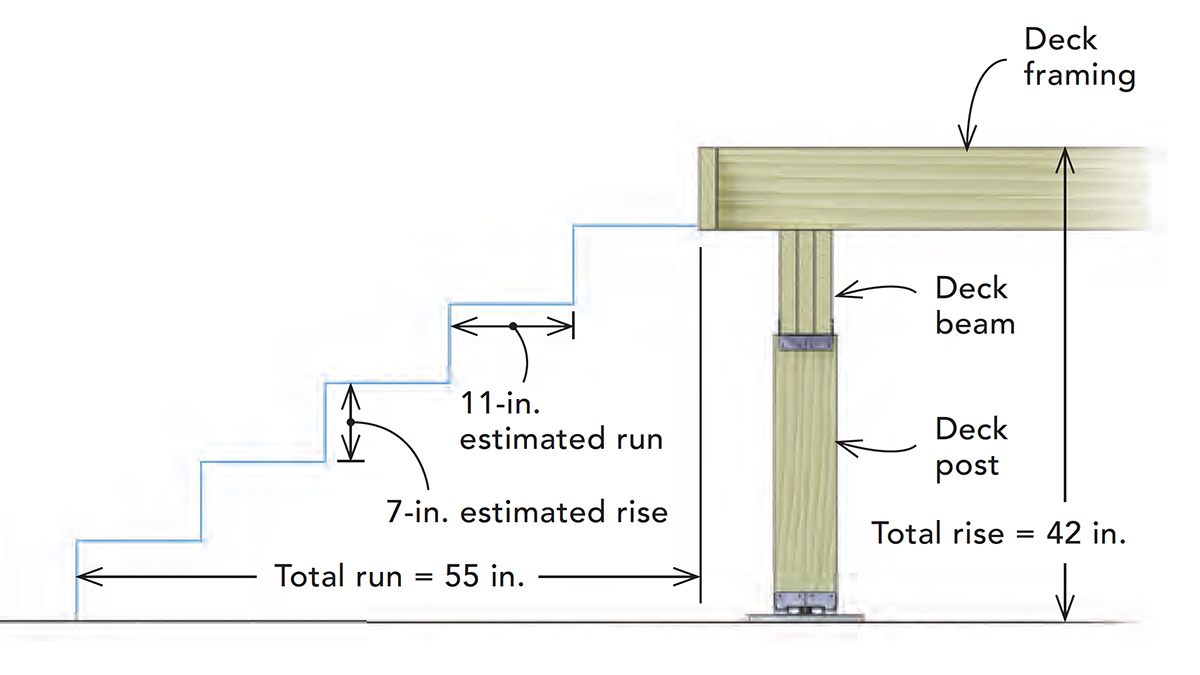 Determine the rise and run

To locate where the stringers will land, we make an initial calculation based off a central stringer position at the deck frame. Measuring from the top of the frame to the grade below, we establish a rise of 42 in. Then we divide that by our estimated riser height, 7 in., to get a run of six steps. Although there are six steps to reach the top of the deck, there will only be five treads because the rim joist acts as the top riser. To determine how far out the stringers will project, we multiply five treads by 11 in., our estimated tread depth, to get 55 in. At that location we can measure the overall rise and locate the landing zone.

Lay out the first stringer 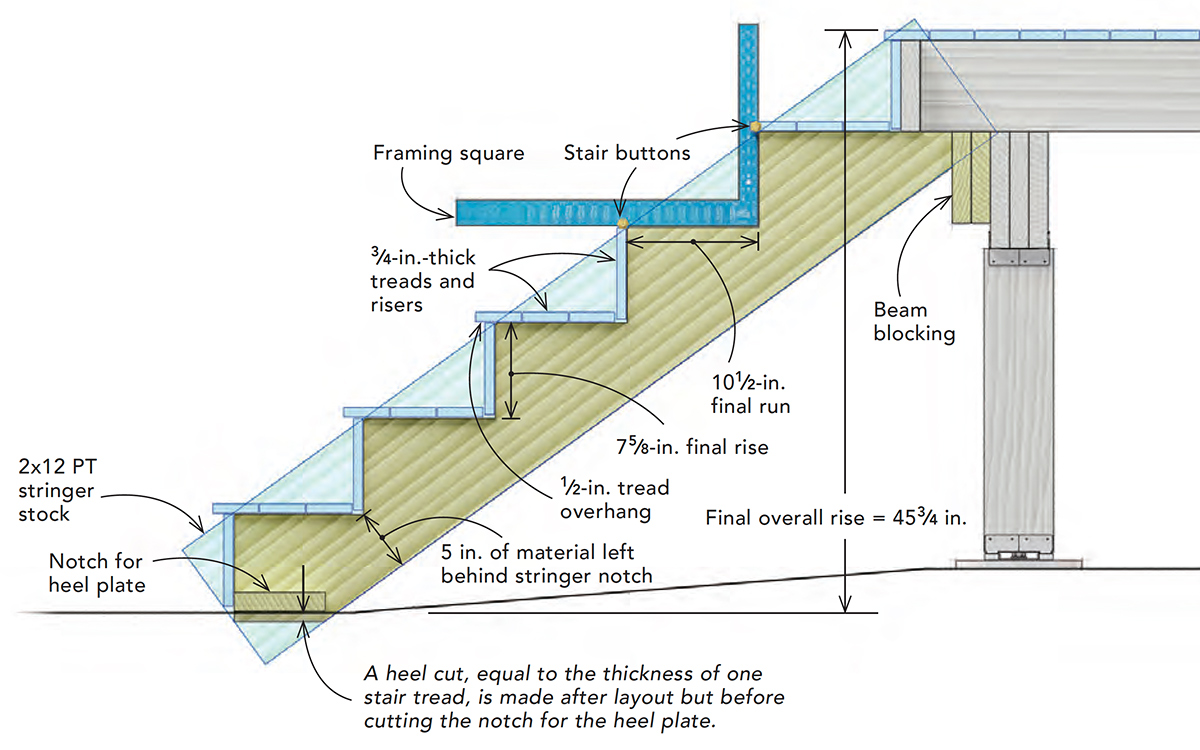 The total rise is the distance from the patio surface to the deck, so we add the decking thickness, 3/4 in., to our overall rise, 45 in., and divide by six steps. This results in a final riser height of 7-5/8 in. For the run, the 11-in. treads will have a 1/2-in. overhang, so the stringer’s tread depth will be marked and cut at 10-1/2 in. Except for the bottom landing, every tread has 3/4-in. decking; to keep the rise at the bottom the same as the others, a 3/4-in. heel cut is made to account for the missing decking at ground level. At the top we extend the run so that the stringer can be secured to the blocking attached to the carrier beam.

When it comes to cutting stringers, being precise is a time-saver later. This deck will be wrapped in mahogany hardwood, so to get the finished details right, we need to spend less time battling framing. When cutting stringers, we make initial cuts right up to the line with a circular saw, and complete the cuts with a jigsaw. We use the first stringer as a template for the remaining stringers. We leave the heel cuts for last so that there’s enough material to dial them in one at a time to compensate for the patio’s slope from left to right. 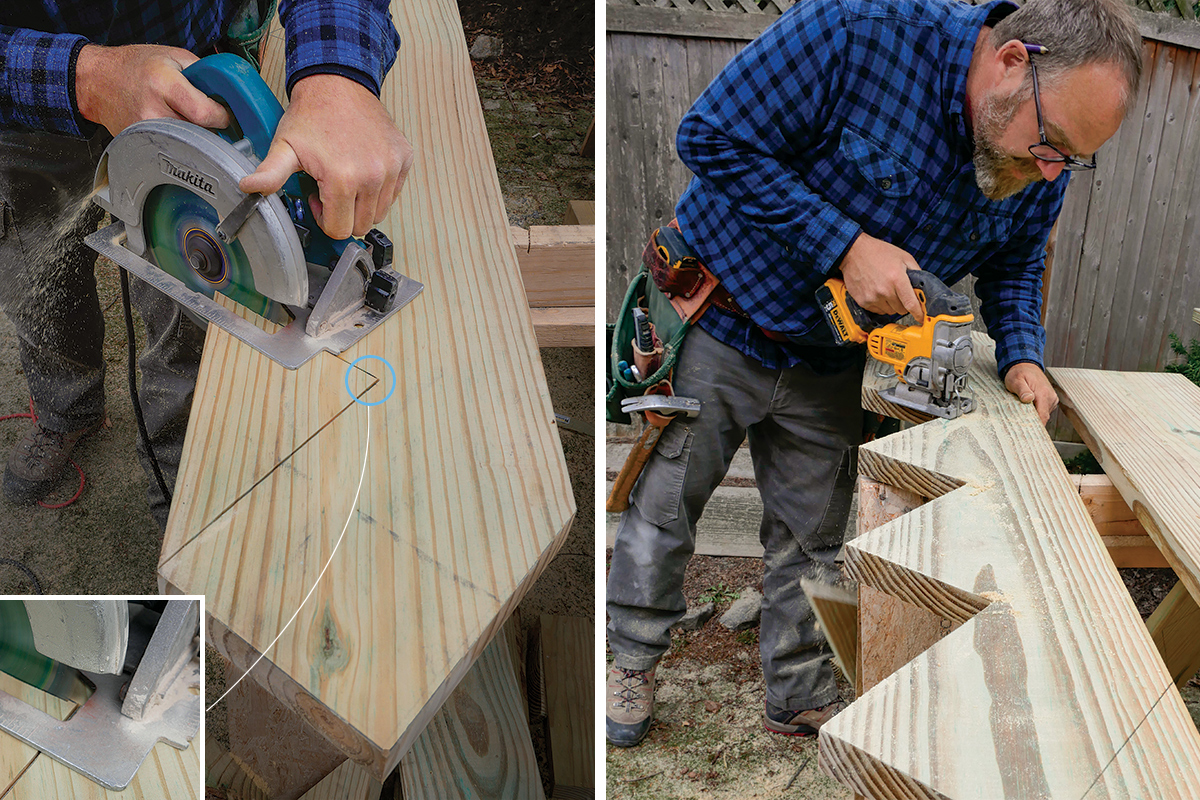 Dial in the heel cuts

Now that the first stringer is fit, we can address the out-of-level base. All we need to do is find the riser height for the first step of each stringer so we can trim the stringers individually. Because the patio slopes from left to right, that means we’ll be taking more material off on the left and less on the right. 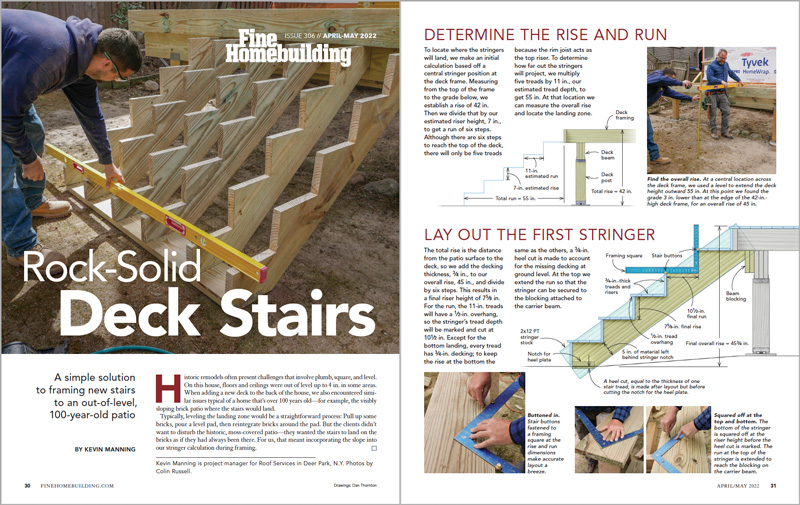