Having a helper is better than working alone when setting the beams in place, but it can be done solo if you work smart.

If you are going to call on a friend to help build a deck, there is no better time to do it than when setting the beams. To be able to support the joists and decking, beams are necessarily big, heavy, and hard to move into place. Whether you are working with a helper or alone, double-check the post locations and bracing before tackling beams: Standing on a ladder with the beam on your shoulder is not the time to realize a post is in the wrong spot or cut to the wrong height. Also, take the time to work out a plan for how you will lift the beam; be realistic. Slipping a disc in your back will slow down the project more than taking the time to get enough hands on a beam to safely lift it into place.

On the deck shown here, we decided to use two 10-ft. beams spliced in the middle rather than a 20-ft. beam, which would have been more expensive, required special delivery, and been harder to manage on the job site. To set a beam, measure the beam’s length centered on the post you will split the beam on (see photos below). Later you will add some hardware to beef up this connection. Because there is minimal bearing on a 4×4 post, take the time to make perfectly square cuts where the beams meet. Clearly mark the cut line on all four sides of the beam. If the saw is out of square, you will know it after one cut and can make a correction for the second cut. Because the blade on a typical circular saw will not clear the beam, there is no need to sticker the lumber off the ground. However, before applying the wood preservative, block the beam’s end off the ground and place a scrap under it so excess preservative does not contaminate the soil. If you are lifting the beam alone, raise one end into place and make sure it is secure. Here, we were able to use some of the bracing to hold the beam in place. With one end secure, lift the other end into place. This method allows you to raise the beam into position while having to support only half of the weight at any given moment. Position the beam to split on the post and toe-screw the end to the post to secure it temporarily. Once the abutting beam is in place, toe-screw it to the first beam instead of the post. The screws are needed only until the connecting hardware gets installed.

1. Measure the length of the beam from the end to the center of the post you want to split the beam over. 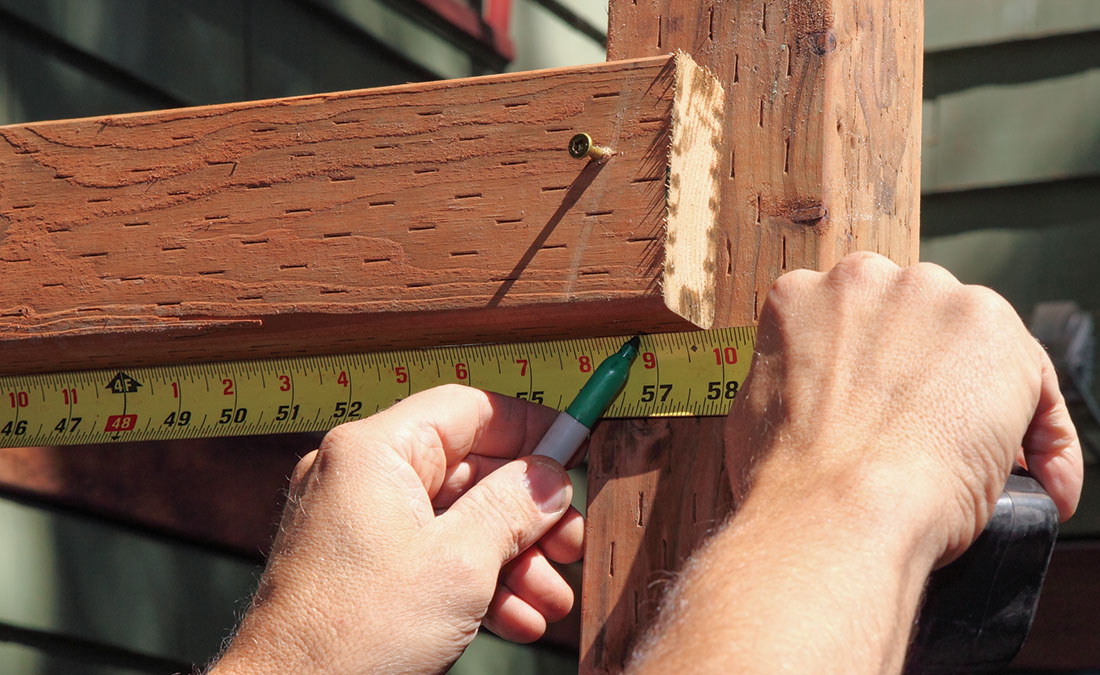 2. Mark the cutline on all four sides of the beam to ensure the squarest cut possible. 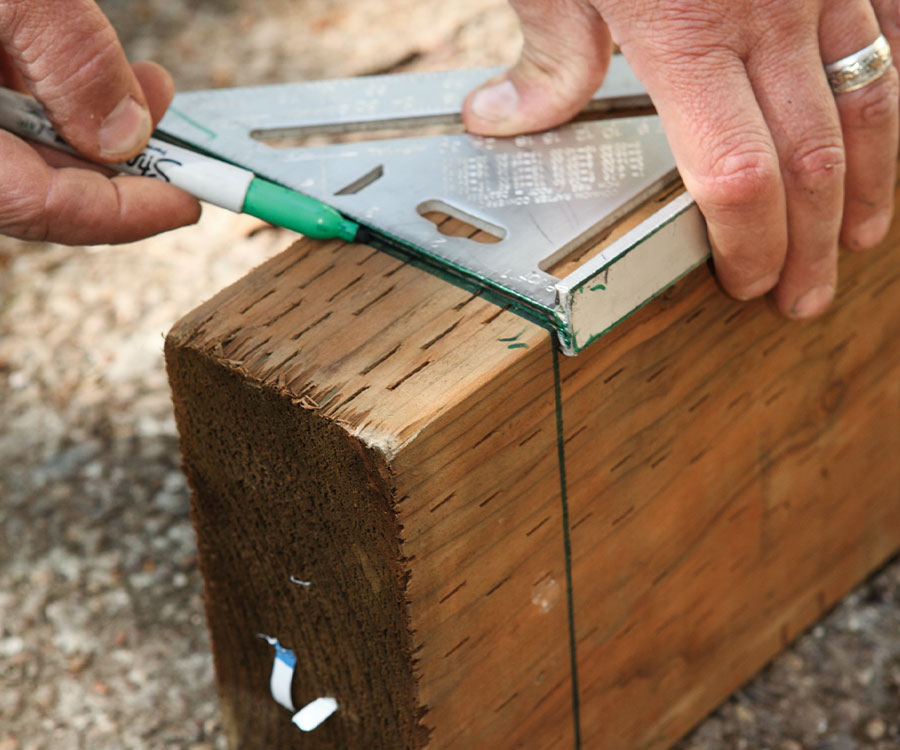 3. Place the beam in a stable location to make the cut, then make two passes, one from each face, with a circular saw. 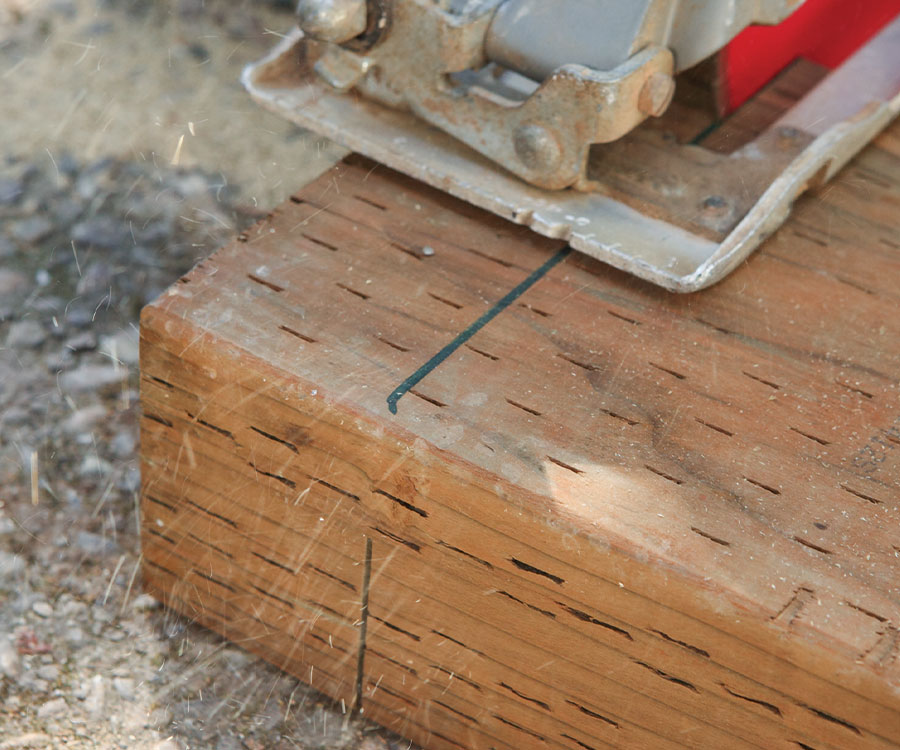 4. Apply a wood preservative to protect the end of the beam against rot and insect damage. 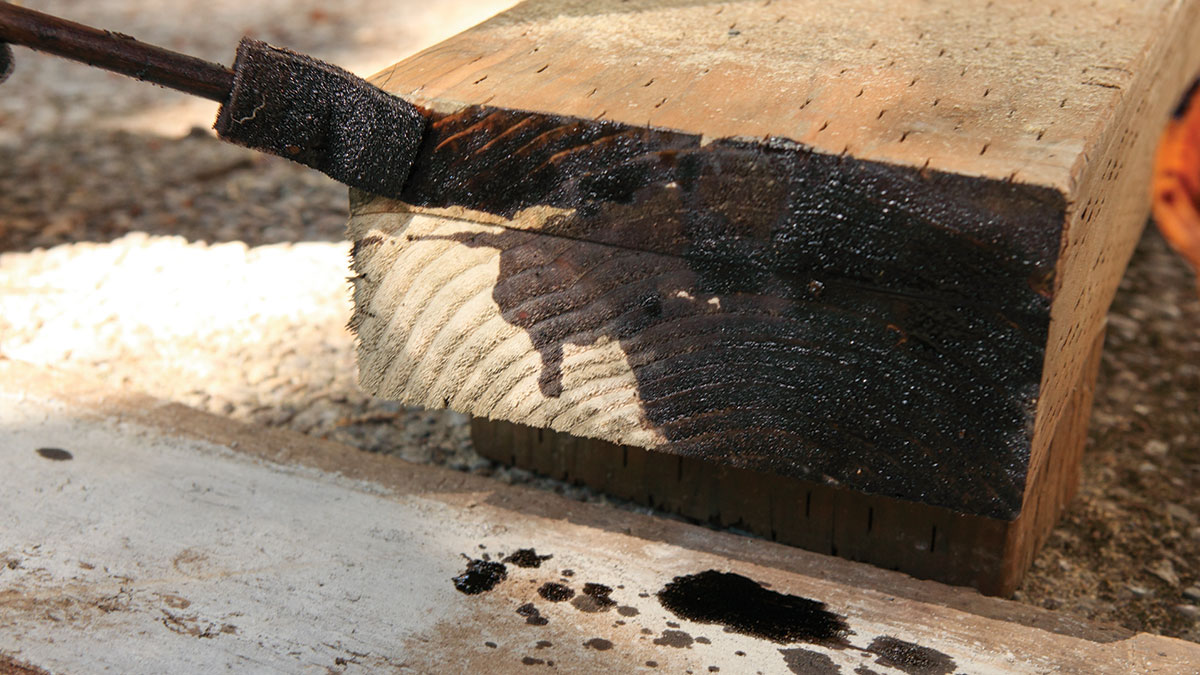 5. Lift one end of the beam and rest it securely close to its final position. 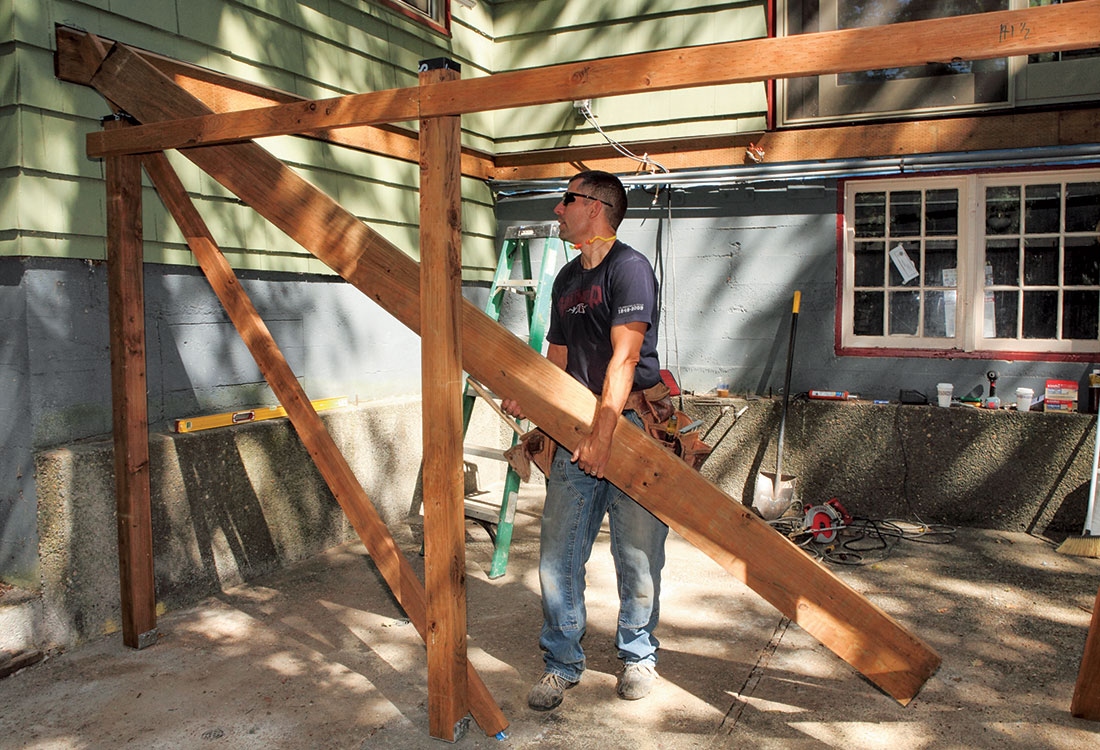 6. Lift the other end of the beam and rest it on top of the post. 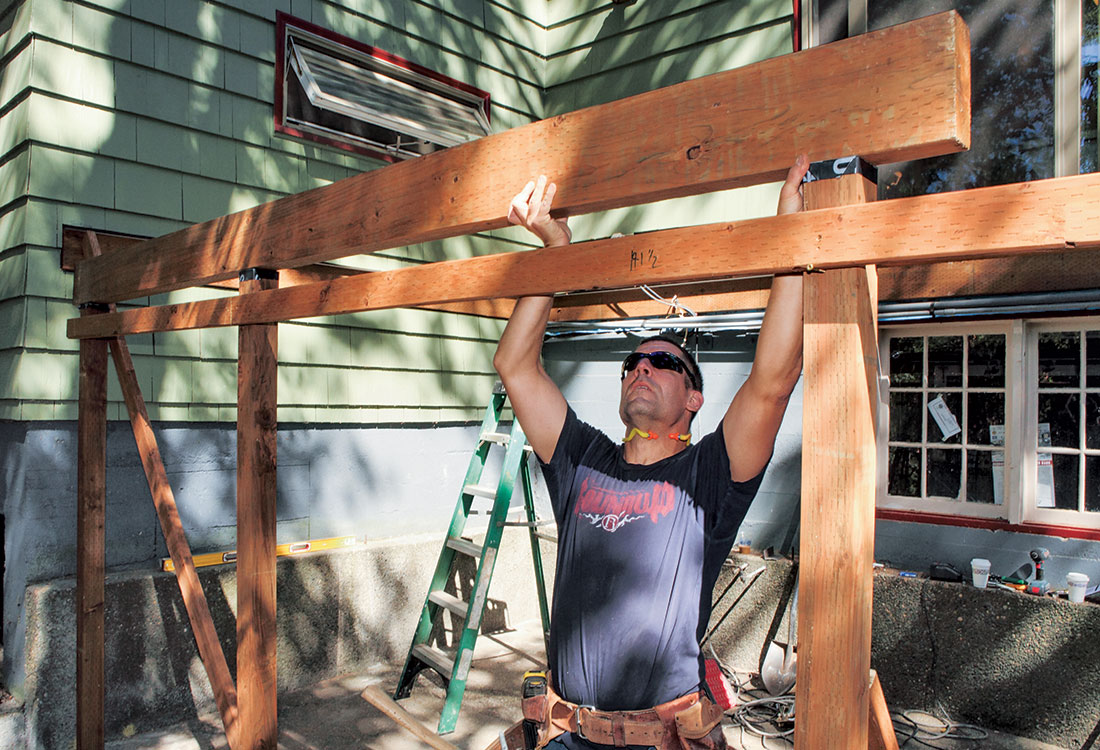 7. Shift the beam until it bears on half the post. 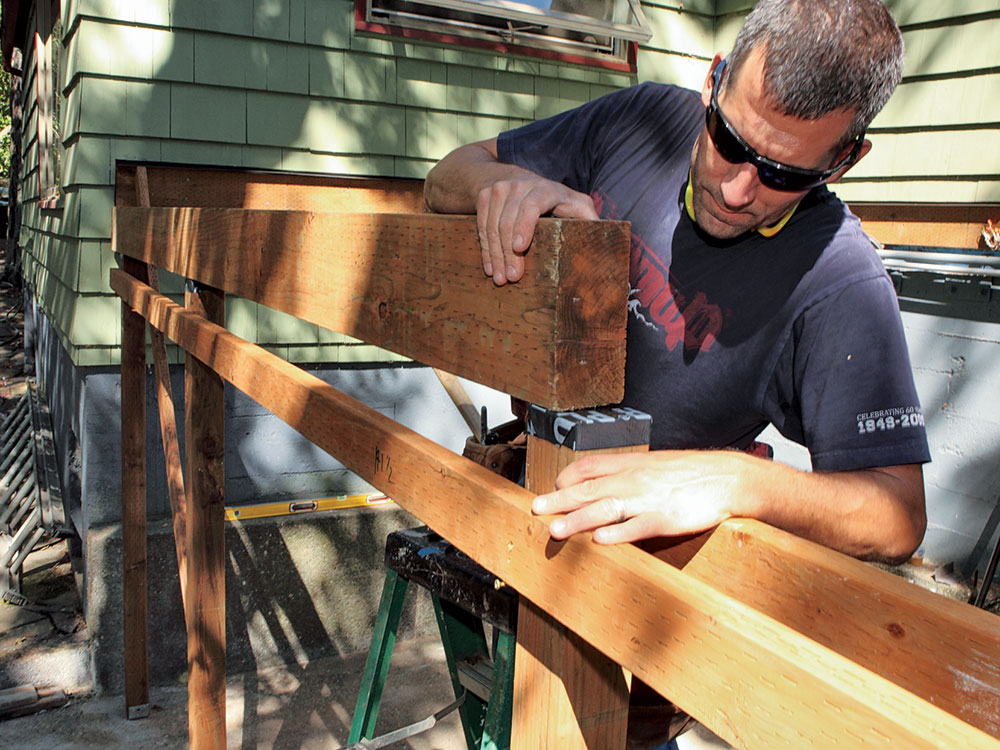 8. Drive a screw, toed at an angle, to temporarily secure the beam. 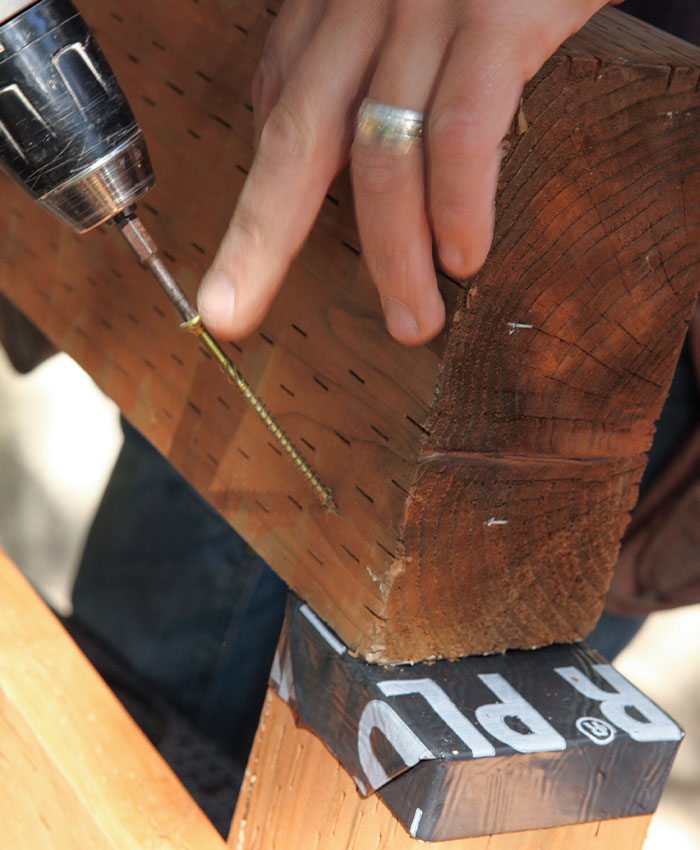 9. Follow the same procedure to lift the adjoining beam and secure it with a screw. 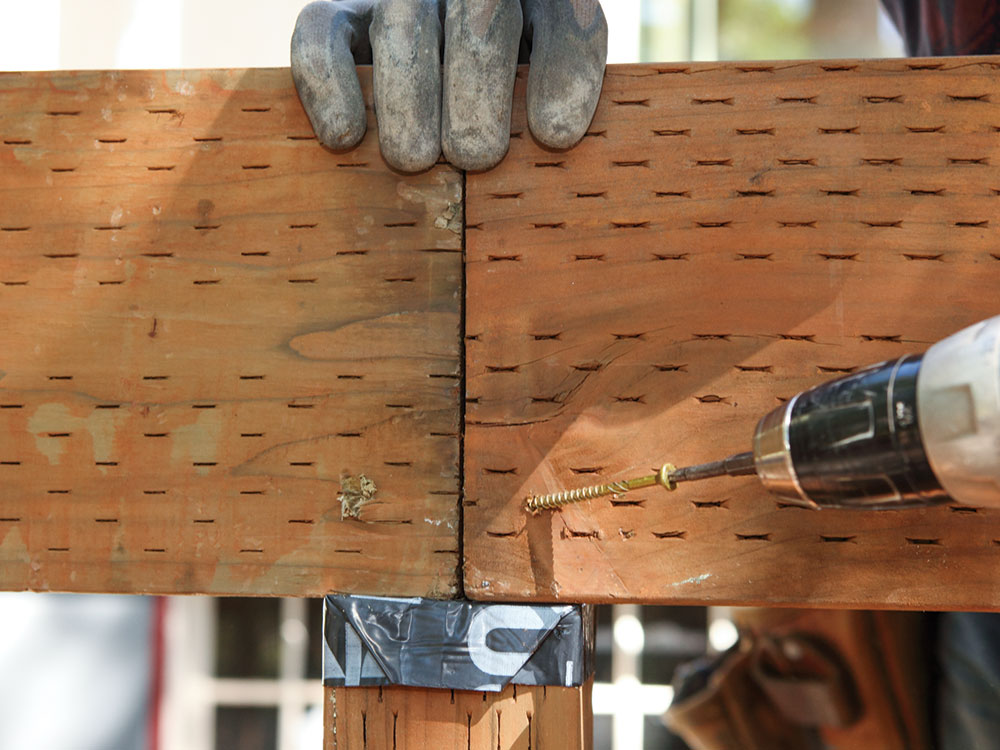 Complete the framing assembly before installing the post-to-beam hardware. This will save time during construction and allow you to easily make corrections where necessary. 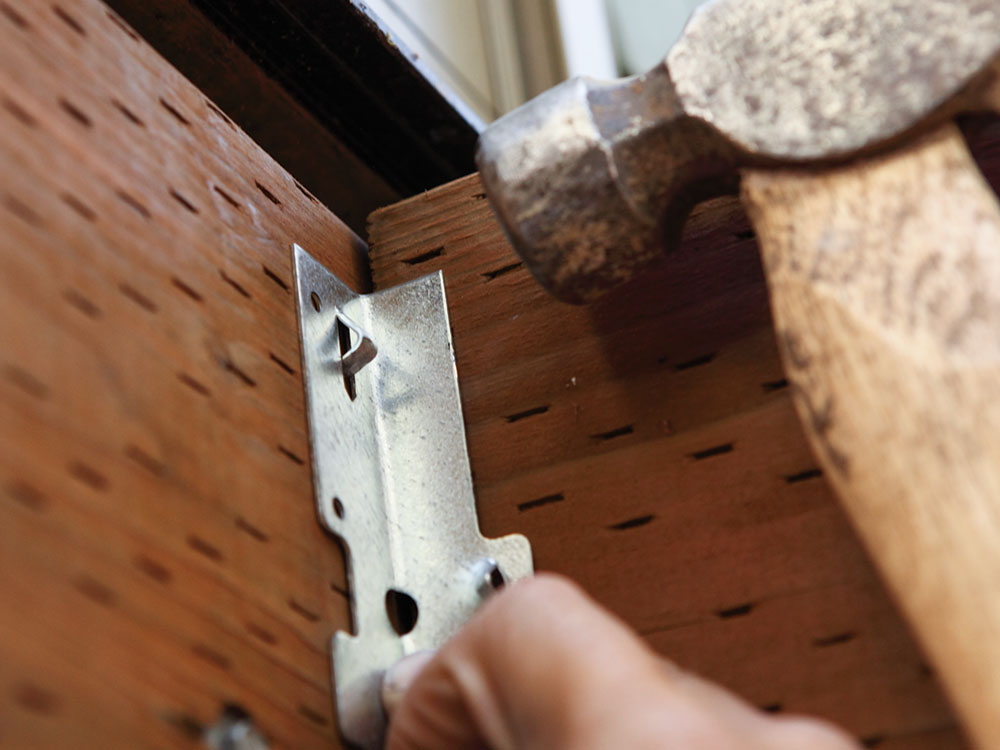 Position the post-to-beam hardware snug against the framing materials and drive a galvanized fastener through the lower flange to secure it to the post. Install one side of the two-part unity, filling every hole with a fastener. Then move on to the other side. 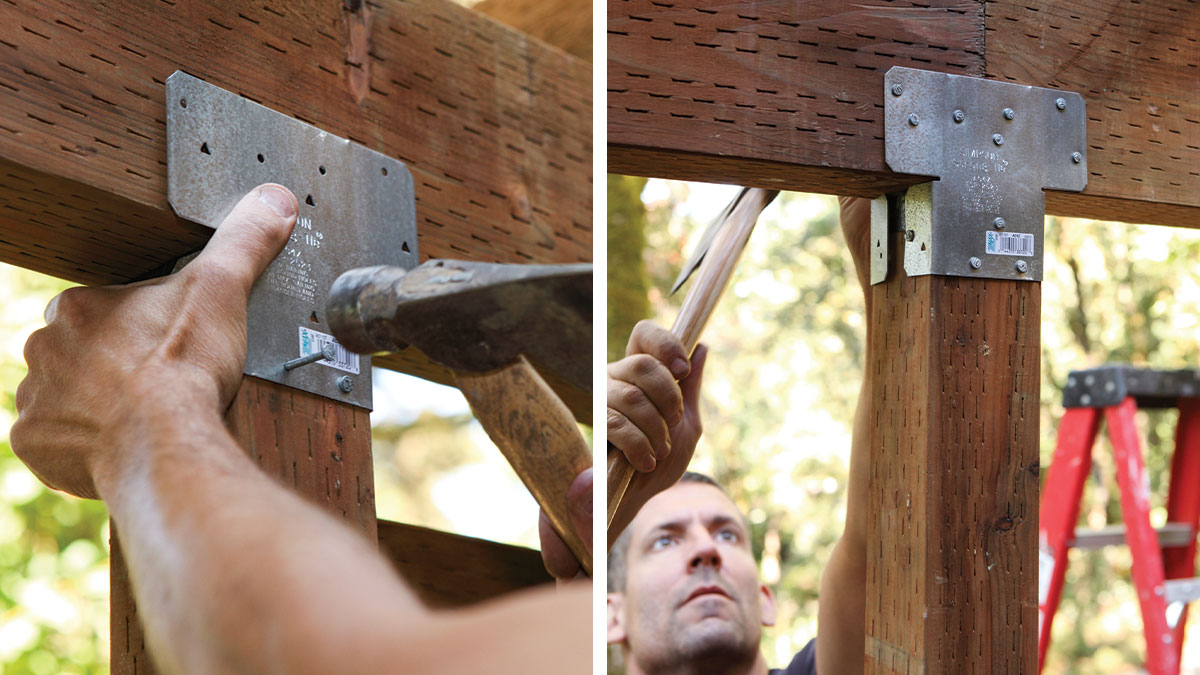 Secure the joint between two beams adding a mending plate above the post-cap flange. I tack the plate on either side level and then drive the rest of the fasteners. Fill every fastener hole. There is a tendency not to fill every hole since there are so many but the engineered plate rating is based on all the fasteners being installed. 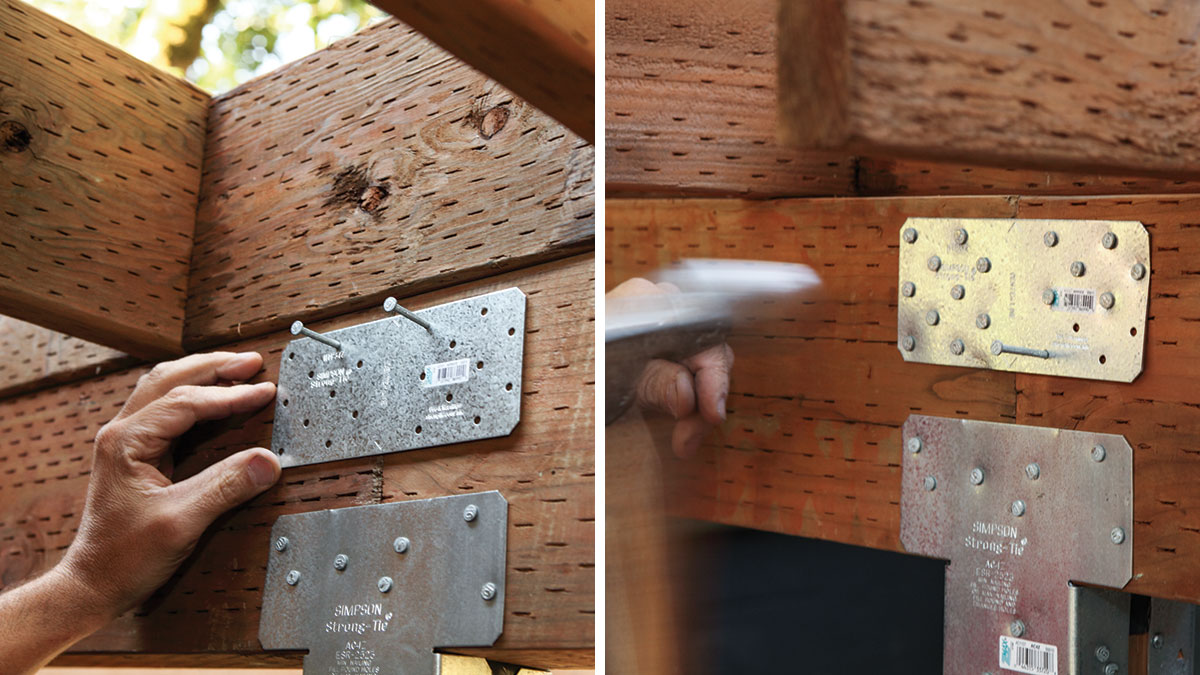 Previous: Setting Deck Posts From the Top Down Next: Moving Lumber Alone