A secure connection at top and a solid base to land on is key for a sturdy deck stair.

There are three important aspects to installing stringers. First, the connection to the framing at the top of the stringer must be secure and able to support the weight of the stairs plus the considerable weight of additional loads. Second, the stringer must land on a solid base that, like the top, must support the load. In addition, the bottom connection must also resist the tendency of the stairs to kick away from the deck. And third, the geometry of the installation must agree with how the stringers were cut—that is, the run of each step must be level or nearly so.

No matter what attachment method you choose, it’s a good idea to fit the stringers before permanently securing them, as seen in the photos below. Locate the temporary screw low in the notch to reduce the risk of splitting the stringer before it’s permanently attached. With one stringer in place and resting on the landing, check the run for level. If the stringer’s run is level or pitched slightly toward the stringer bottom, that’s acceptable. If the slope is back, meaning the edge of the step closest to you when you walk up the steps is higher, then adjust the stringer position until the stringer run is level.

1. Test-fit the stringers before permanently securing them, being careful not to force the stringer into position. 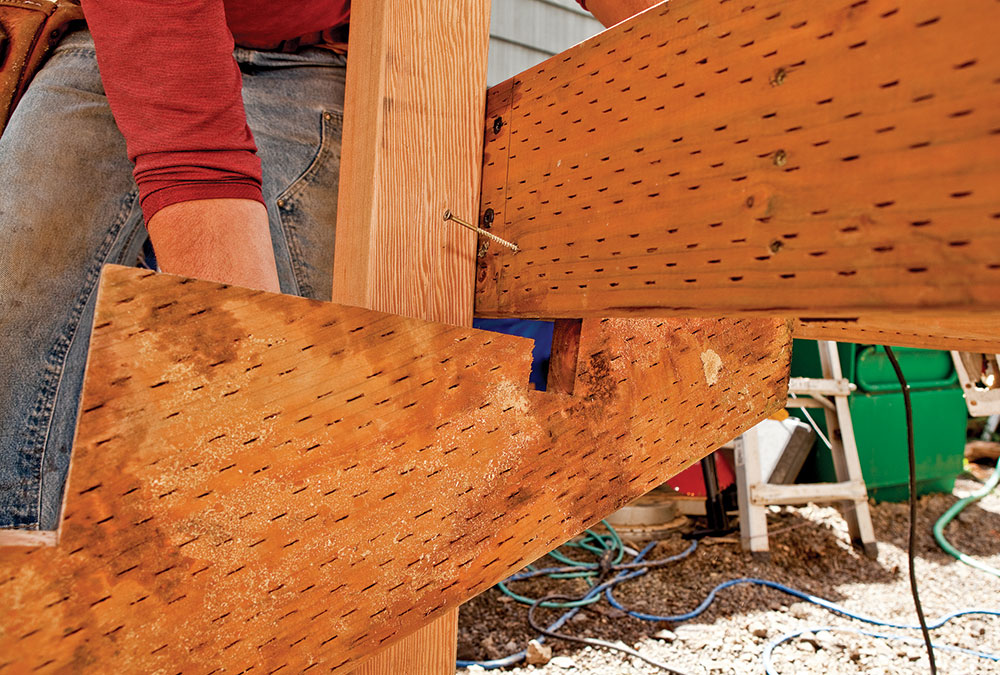 2. Attach the stringer to the framing with temporary screws and register all three stringers from the same attachment point. 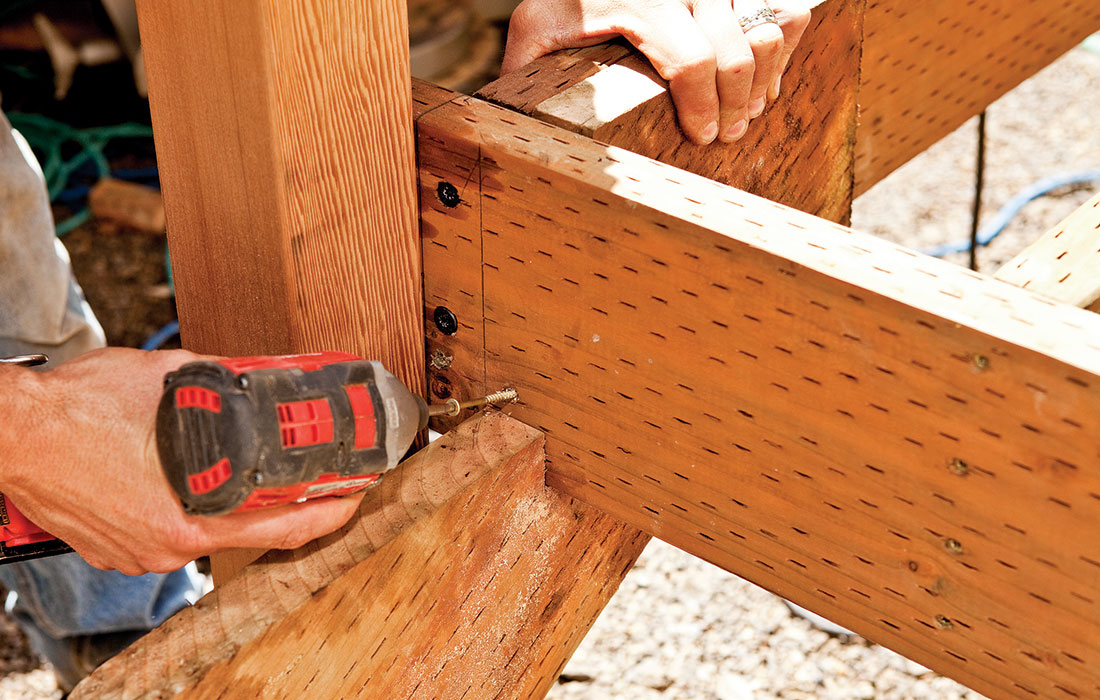 3. Check the stringer for a level run. If the run slopes back, the bottom of the stringer needs to drop in relation to the top. 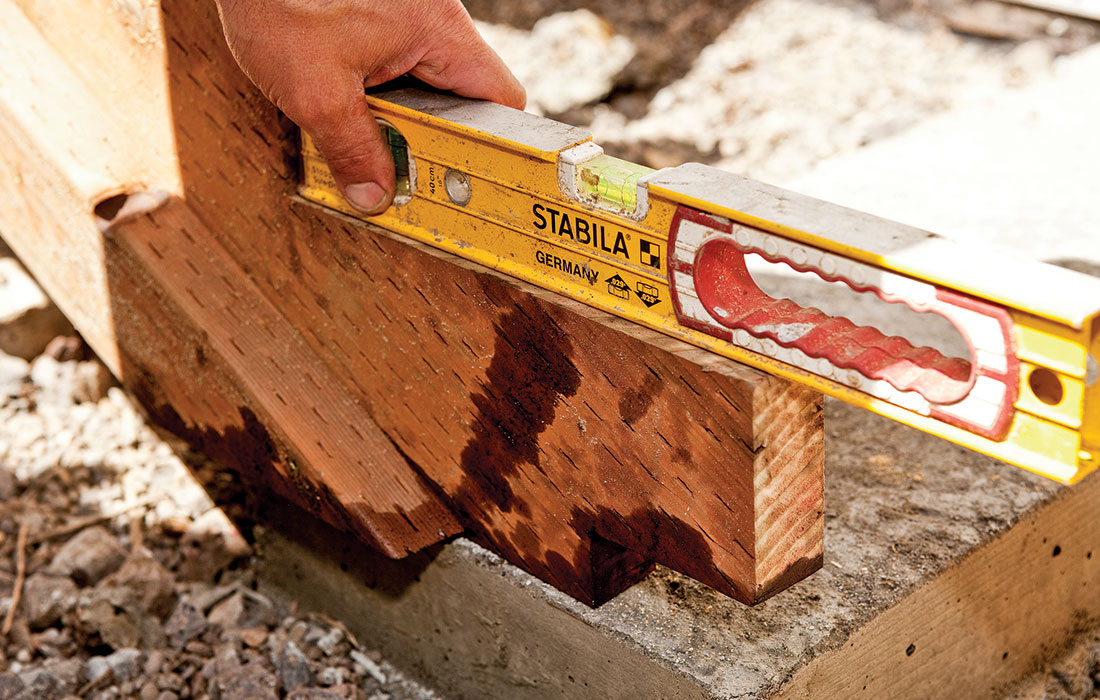 4. Position all three stringers temporarily and repeat checks for overall fit and levelness of the run. 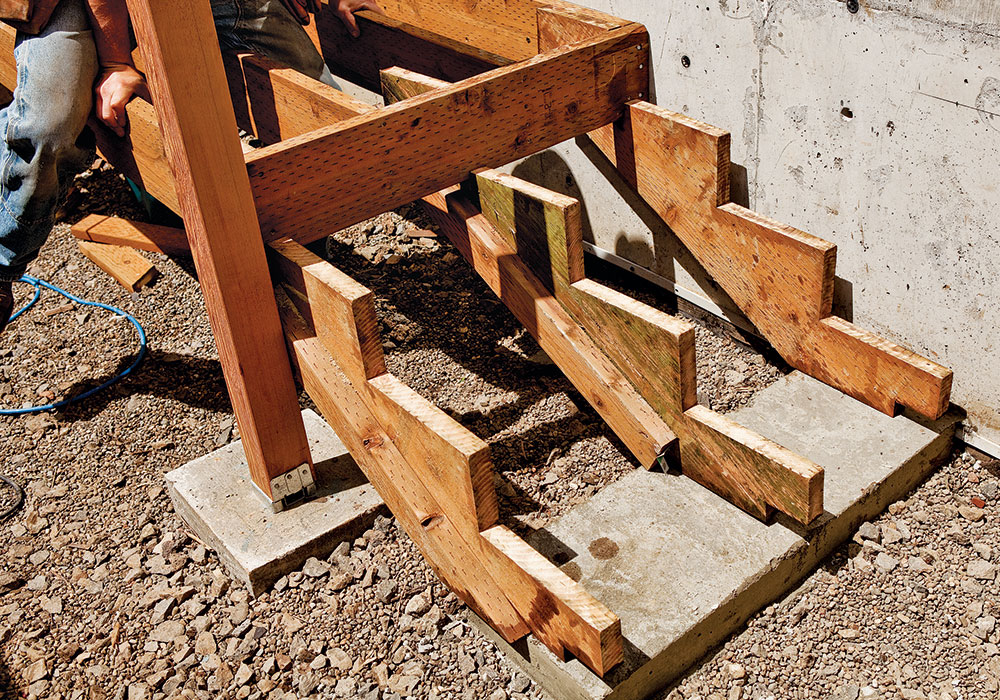 5. Level across all three stringers. The stringers should be within 1/16 in. If not, adjust the low stringer up if possible. 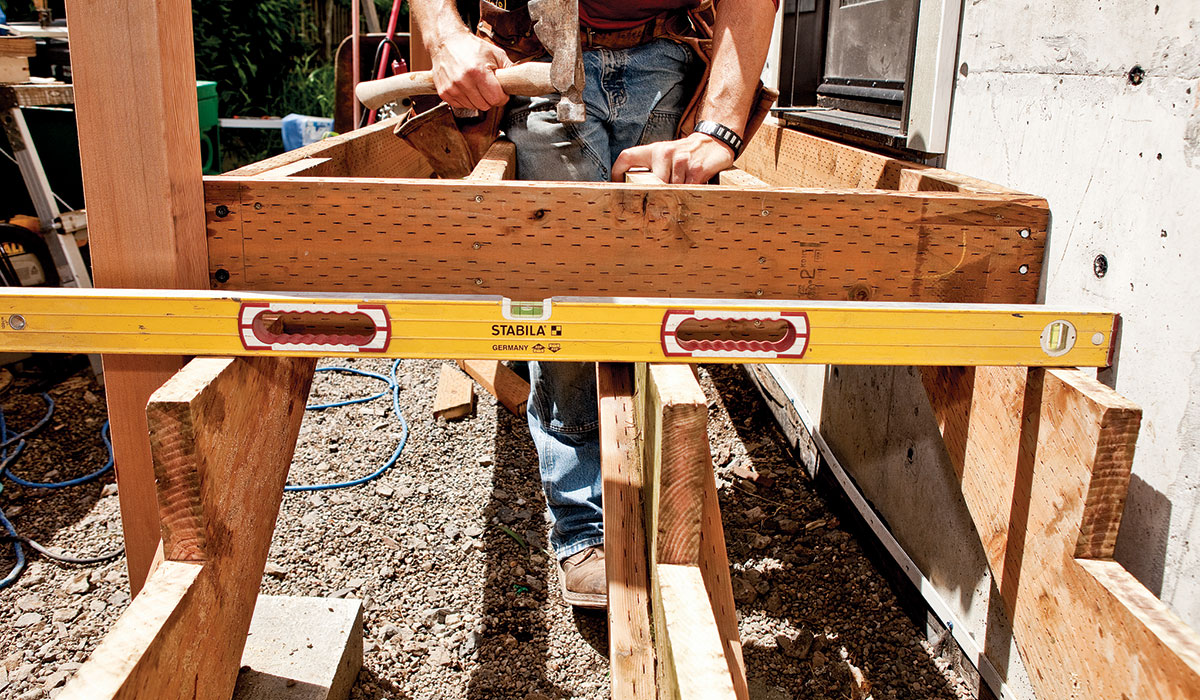 6. Check the rise alignment of all three stringers at each step and make adjustments so that they are within 1/16 in. at every step. 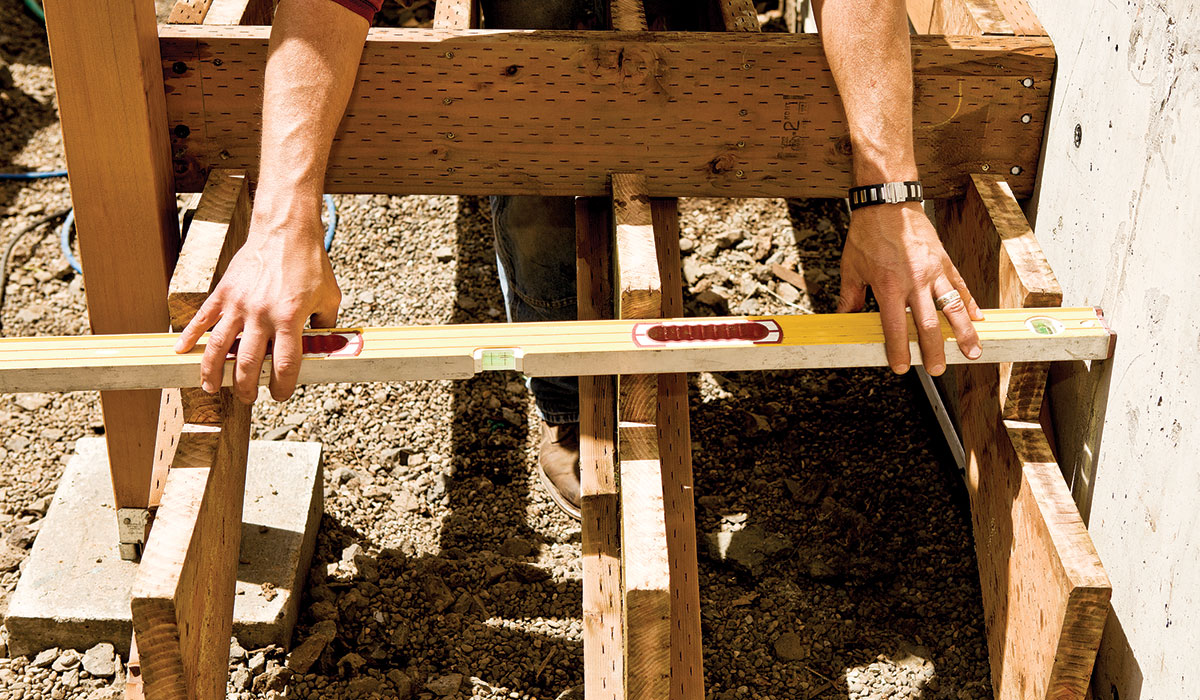 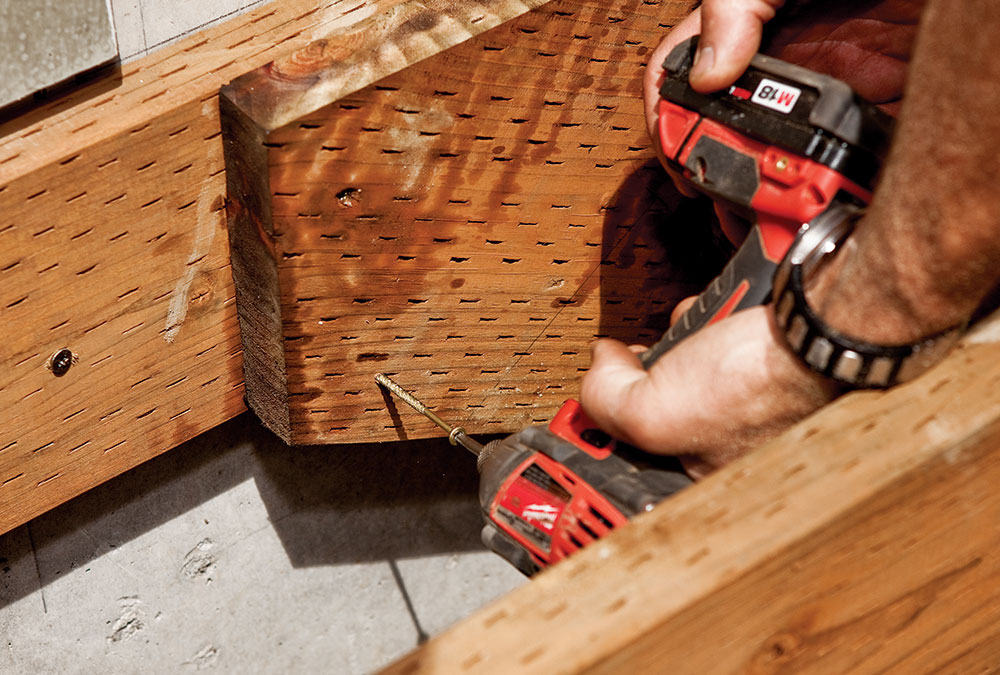 8. Install blocking for joists that do not align with a deck joist. Secure the blocking with through screws or hardware. 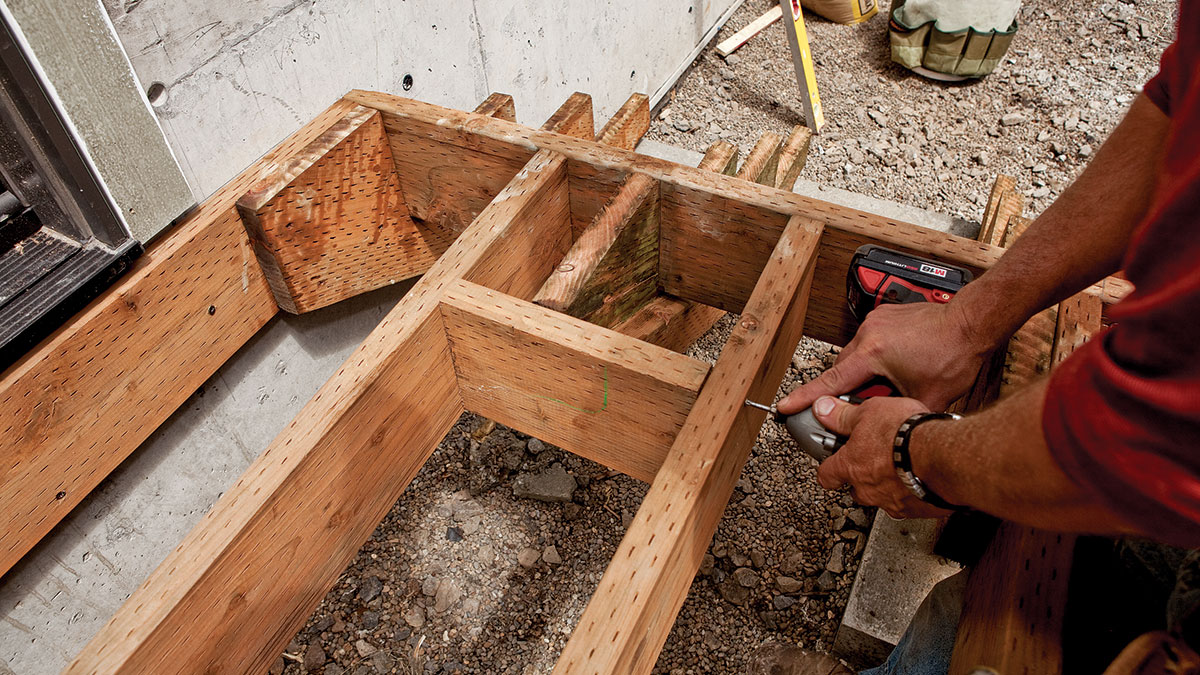 9. Screw through the blocking to secure the joist. Fasteners positioned low on the stringer will carry more load. 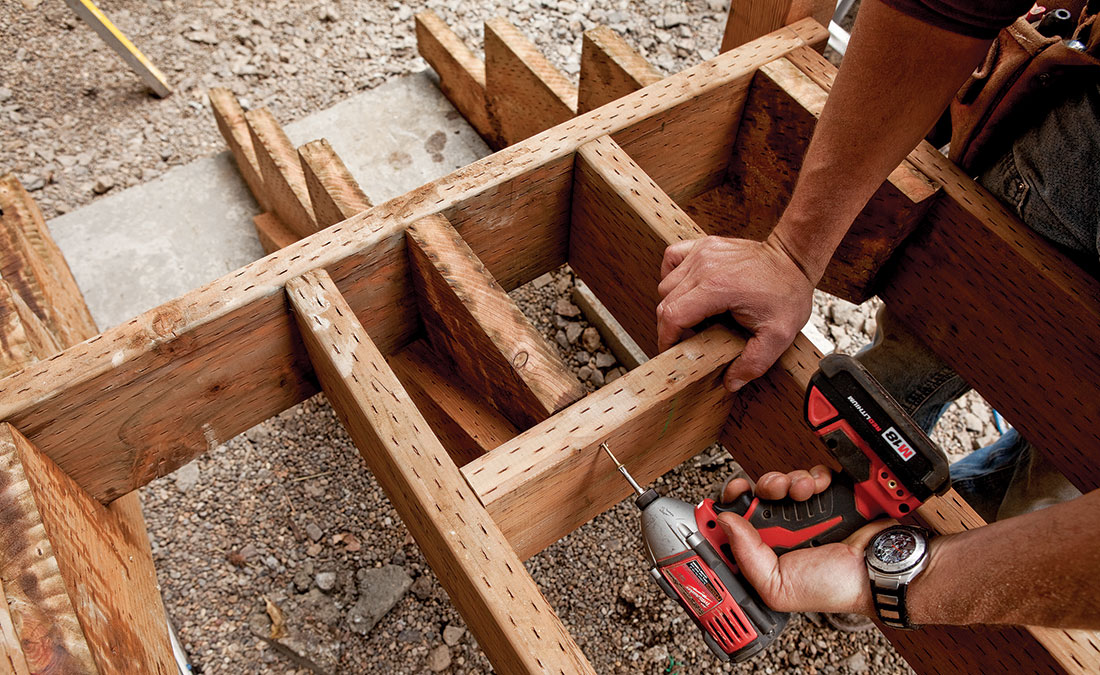 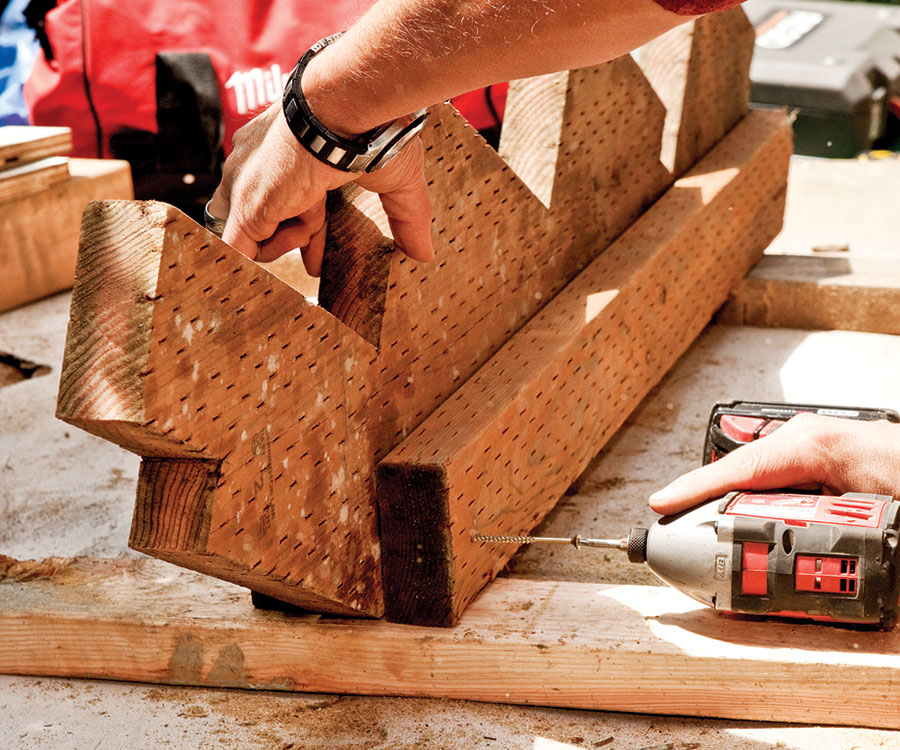 Trade Secret: I like to add a strongback–a 2×4 board screwed to the side of the stringer to add stiffness–to every set of stairs I build. It’s an inexpensive way to make a noticeable difference in the feel of the finished stair assembly.

Securing stringers to the landing

1. Fit the kicker board into the notches at the bottom of the stringer and then check for level across the stringers. 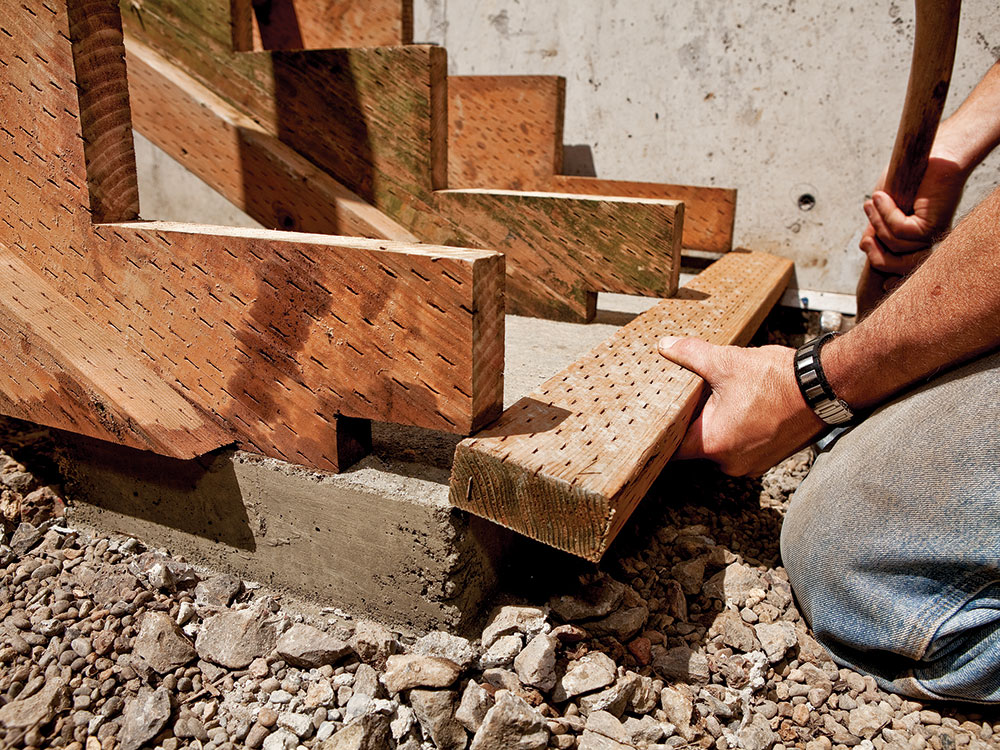 2. Drill a hole through the kicker board and into the concrete with an appropriately sized masonry bit. 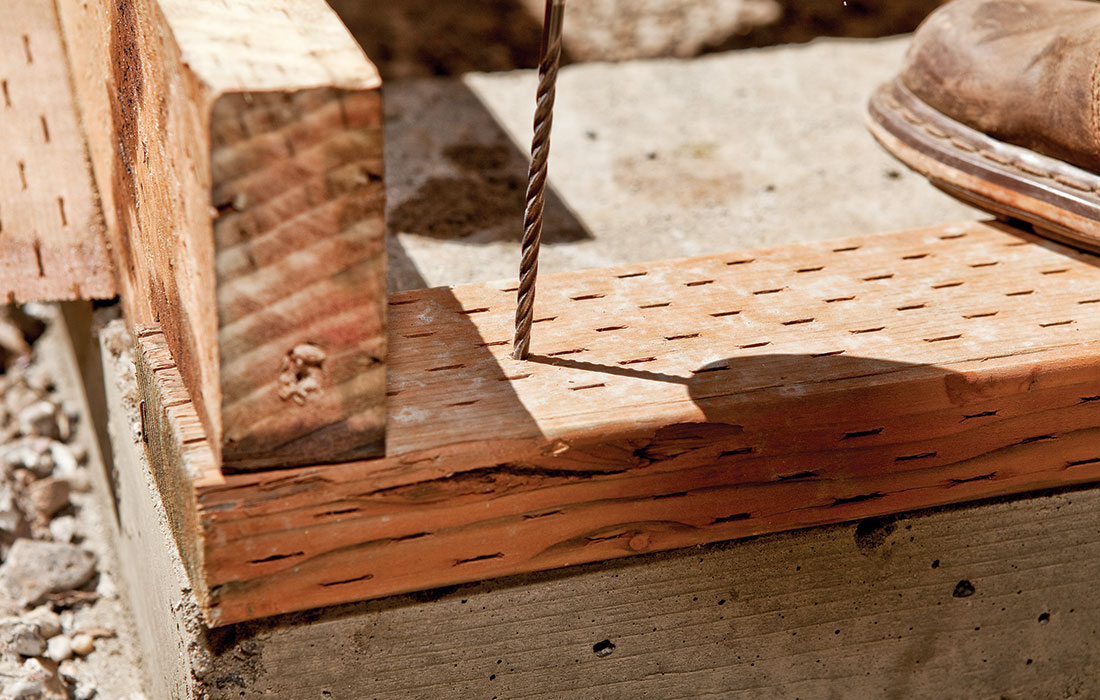 3. Drive a masonry fastener into the concrete to secure the kicker board. 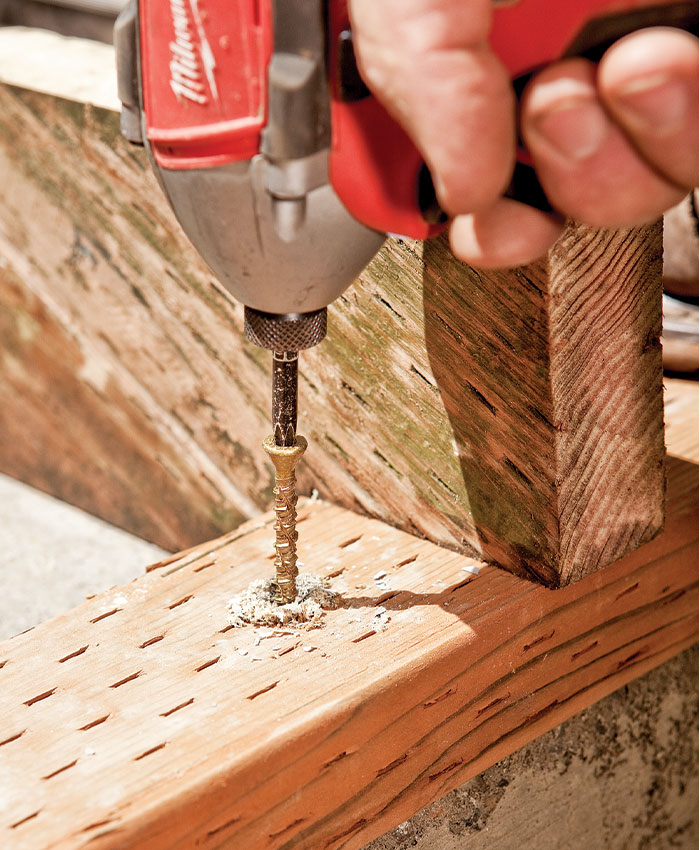 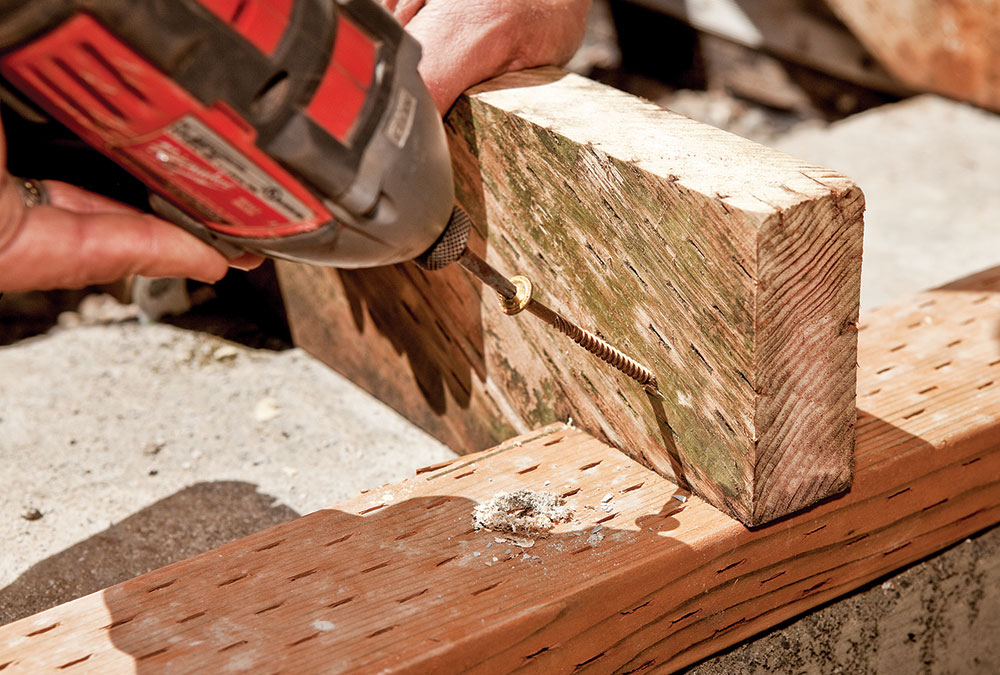 Options for securing the stringers to the landing

It’s important to land the stairs on a secure pad that will resist lateral movement. There are three main ways to secure the stringer to the pad to transfer that lateral load. One way is to use galvanized brackets secured to both the stringer and the concrete. This has the advantage that no modifications need to be made when pouring the concrete pad or cutting the stringers. Another method is to secure a pressure-treated kicker board to the pad with masonry bolts. This is a very secure connection because the force of the stringer load pushes directly on the kicker’s face. Finally, in drier climates that are less prone to rot, you can choose to embed the kickers in the concrete and secure the stringers with brackets. This method avoids the need for using masonry fasteners.