Laying Out and Cutting the Stringers

Calculate the rise and run, mark the stair notches, and then cut with a circular saw.

Decks built for the vast majority of homes will need a few steps to connect the deck to the surrounding yard. For these projects, a basic set of stairs as shown here will work well.

Once you’ve located where the stairs will attach to the deck framing according to the plans, you can measure for the rise and run. As seen in the photos below, first, measure for the rise by establishing a level line from the top of the decking at the attachment point. On this project, the stairs were adjacent to the foundation wall, which was a handy place to mark the stair geometry. For situations that don’t have this convenience, mark the measurements down on a drawing. Using the level, mark a horizontal line near where the stairs will land. Then measure down from the level line to the top of grade. While this sounds pretty simple, knowing exactly where to measure the grade requires knowing exactly how the stringers will be supported.

1. Level across from the finished deck height. If the decking is not installed (as here), place a scrap of decking on top of the framing to establish the correct height. 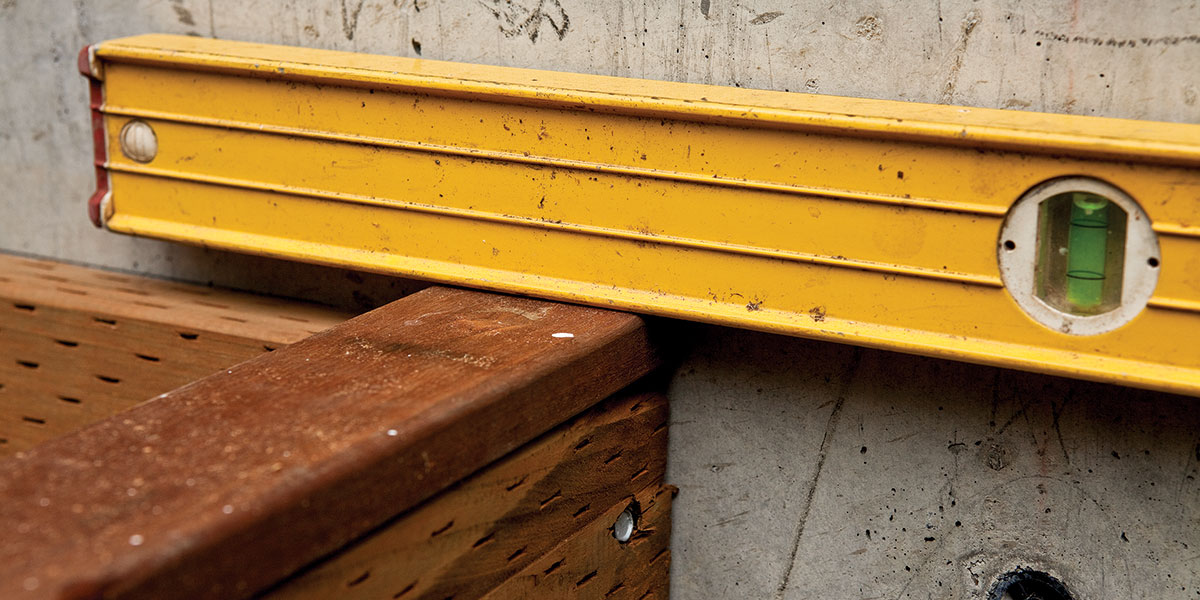 2. Mark the deck elevation over the stair landing location. If you don’t have a wall handy, find a helper to hold and read the level. 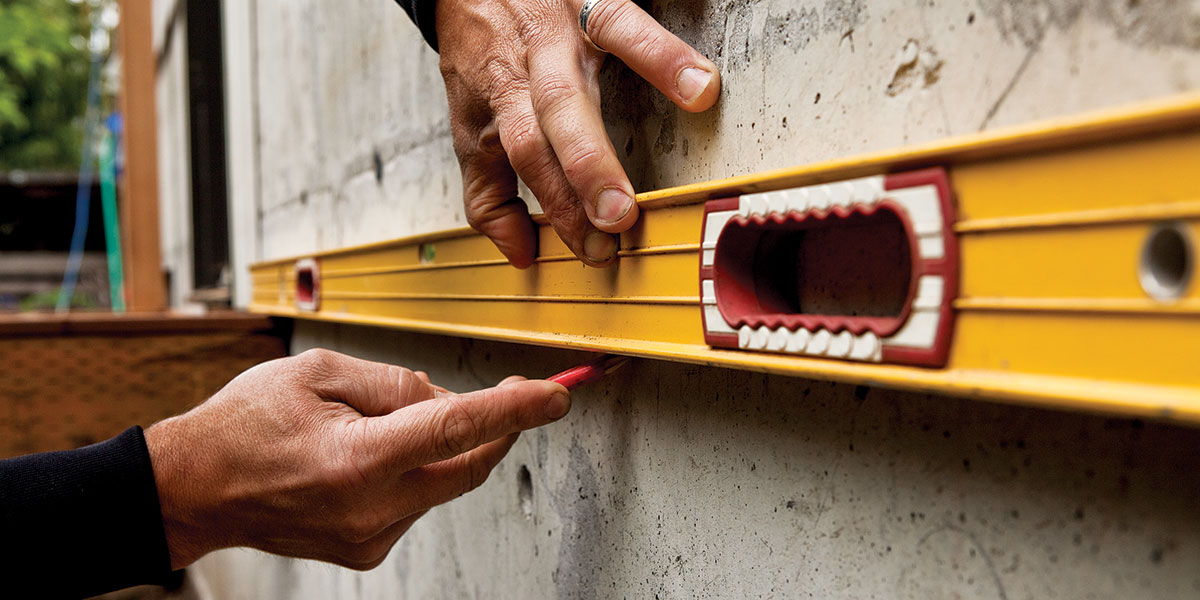 3. Measure down to the top of grade or stair landing to determine the overall rise. 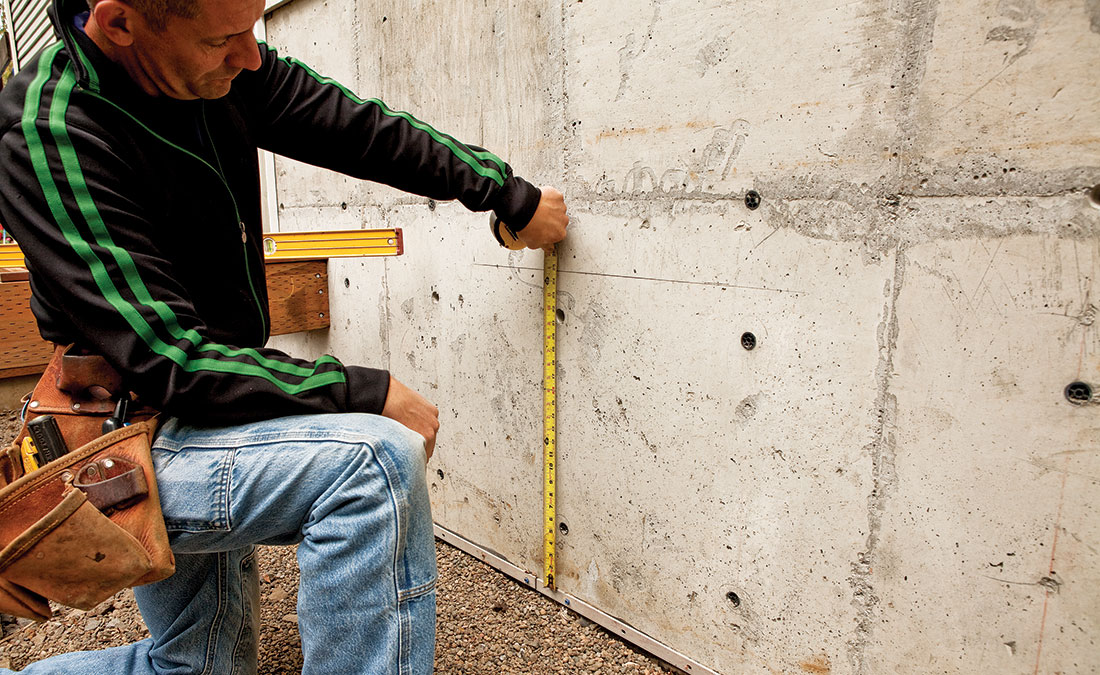 If the landscaping is still rough, you can establish the stair-landing elevation by referencing the surrounding grade. You’ll want to raise the stair landing slightly to avoid water pooling at the bottom of the stairs.

Once you know the distance from the top of the decking to the stair landing, divide the distance by the estimated number of risers: Total rise x Number of stairs = Individual stair rise.

Trade Secret: Make an educated guess for rise and run. Before leveling out to measure the rise, measure down from the decking to the grade and divide the length by 7-1/2 in. If the grade drops only a little, this will give you the number of risers plus or minus one.

If you are lucky, the calculation for the individual stair rise will be around 7 in. If the calculation is less than 6 in. or more than 8 in., try adding or subtracting a step accordingly, then recalculate the step rise.

Making minor adjustments to rise and run will change the “mood” of the stairs. For relaxed stairs, lengthen the run and shorten the rise. For more aggressive stairs (that is, steeper stairs), shorten the run and raise the rise. While code will vary a little, generally you’ll want to keep the rise between 4 in. and 7-1/2 in. and keep the run over 10 in.

Laying out and cutting the stringers

With the rise and run calculated, you can set up a framing square to mark out the stair notches on the stringer, as seen in the photos below. Clamp a straight length of scrap wood (leftover trim stock works well) to a framing square, with the wood’s edge registered to the rise and run measurements. I’ve seen some carpenters use spring clamps to hold the straightedge in place, but C-clamps hold the jig setup more securely and thus reduce the chance of a layout error. Place the jig 12 in. or so in from the end, avoiding any knots in the wood that might weaken the stringer.

To mark out the rest of the notches, slide the framing square to the next step, referencing the previous notch. There is a chance that you might wander off layout using this method. On short runs this is not a problem, but on longer runs it can be more of a concern. Short of laying the whole stringer out with a construction calculator, you can increase accuracy by aligning a Speed Square to the adjacent triangle. At the bottom of the run, draw the grade and kicker onto the board as with the top. Cut the notches with a circular saw, being careful not to overcut the inside of the notch. The waste portion of the notch will easily break off at this point.

Trade Secret: Mark the waste sections with an X. While what is waste and what is not may seem obvious while marking the stringer, just a few minutes later when you’re focused on making accurate cuts, it easy to forget which side of the line to cut on.

To clean up the stringer, finish the notch cuts with a handsaw or jigsaw. To avoid overcuts that might weaken the stringer, use a jigsaw where the layout calls for a tight inside corner. To protect the stringer and preserve all the hard work you’ve just invested, apply a coat of wood preservative to all freshly cut ends.

1. Set up a stair-marking jig by clamping a straight-edged board to a framing square. Register the straight edge to the stair’s rise and run. 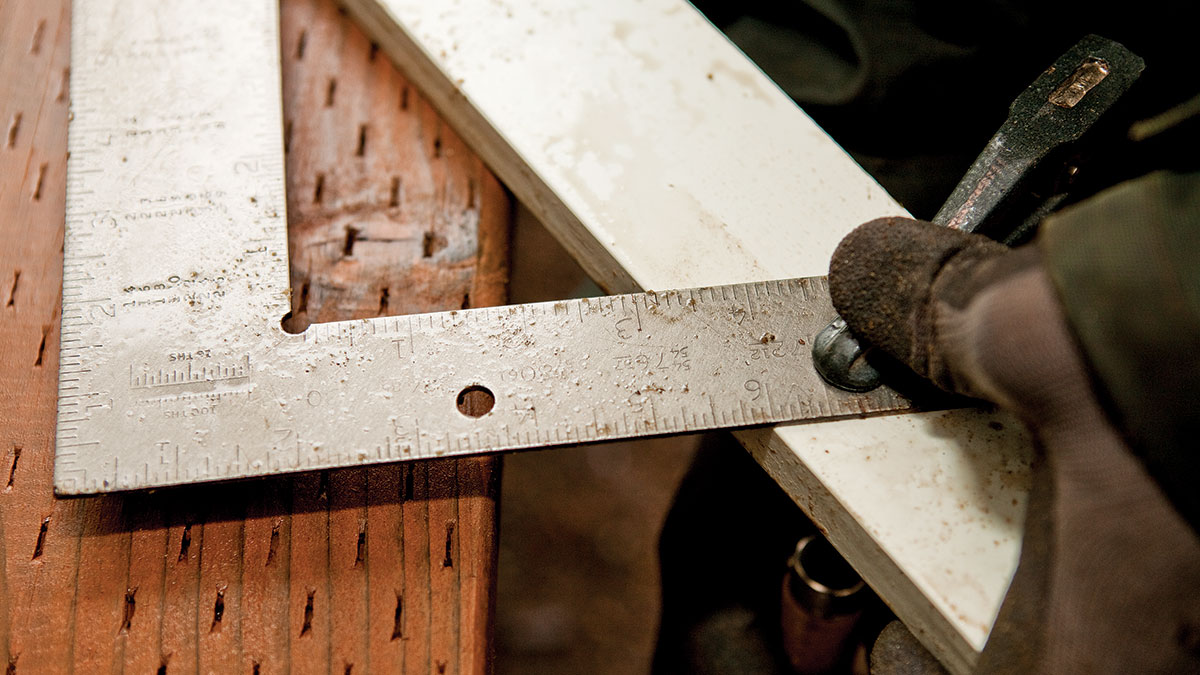 2. Mark the first stair notch in the stringer. Orient this notch at least 12 in. from the board’s end and clear of any knots. 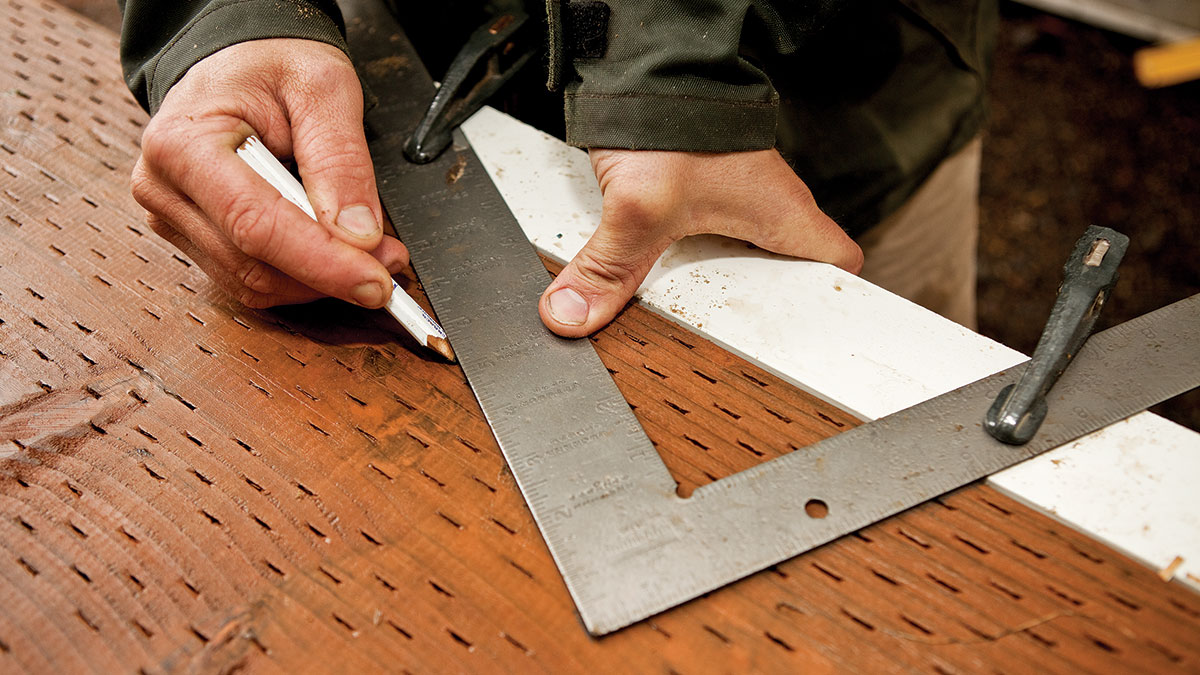 3. Draw the deck-framing plan onto the stringer face. Clearly mark an X on any waste portions. 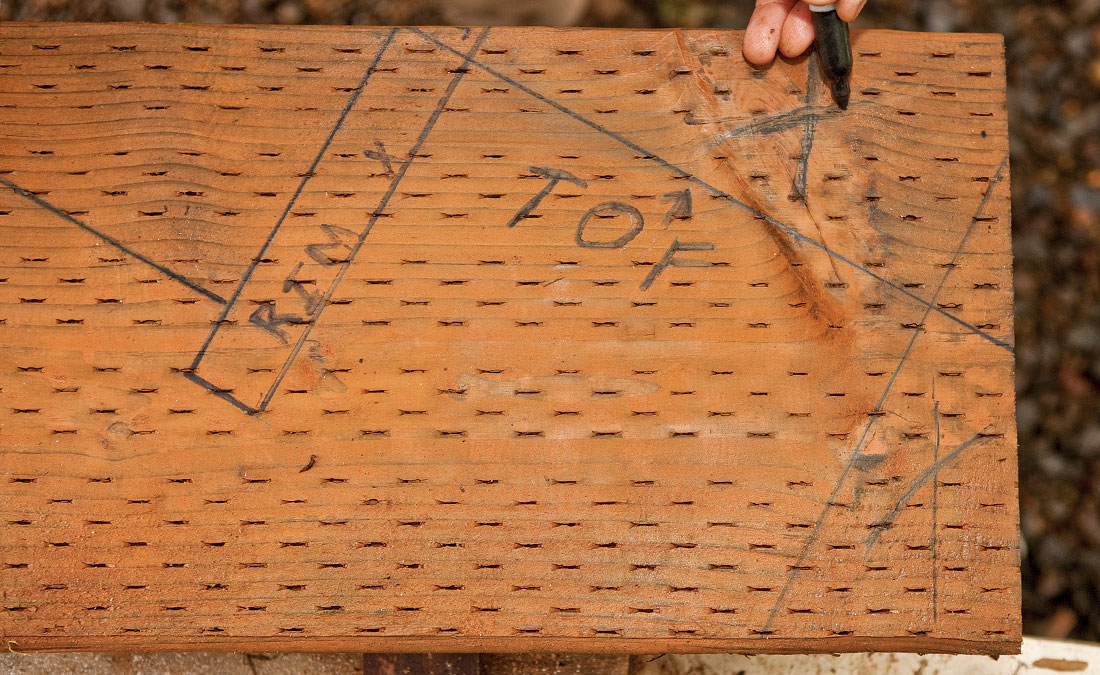 4. Align a Speed Square to the adjacent notch line to increase the accuracy of stringer layout. 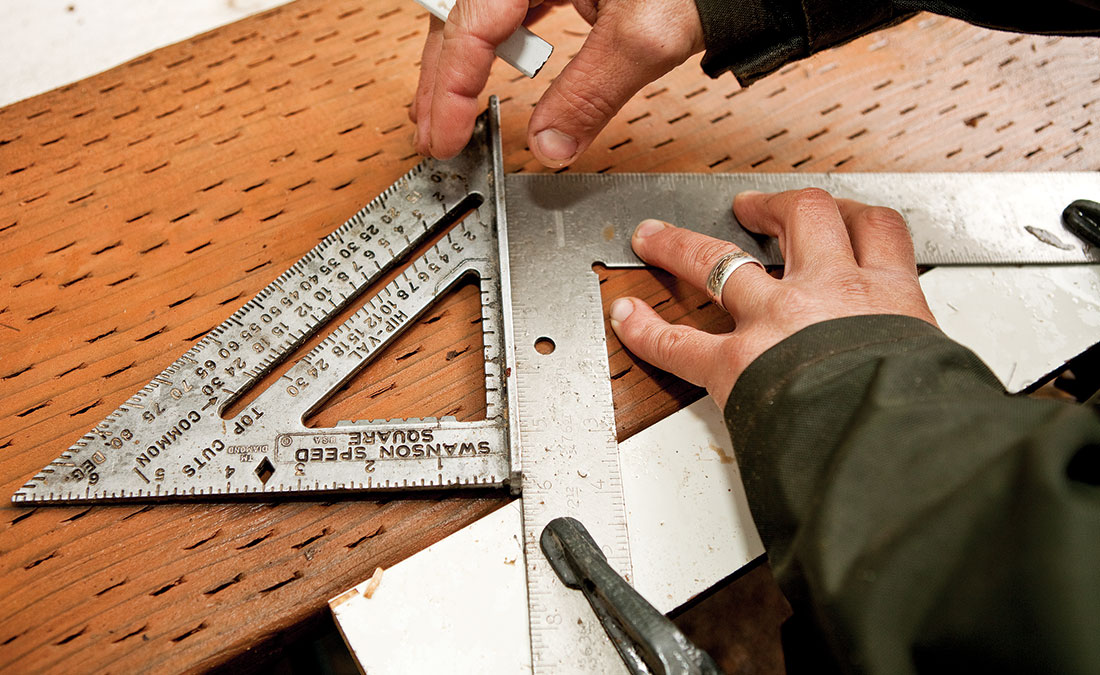 5. Mark the landing plan on the bottom of the stringer. As with the top, mark the waste portions with an X. 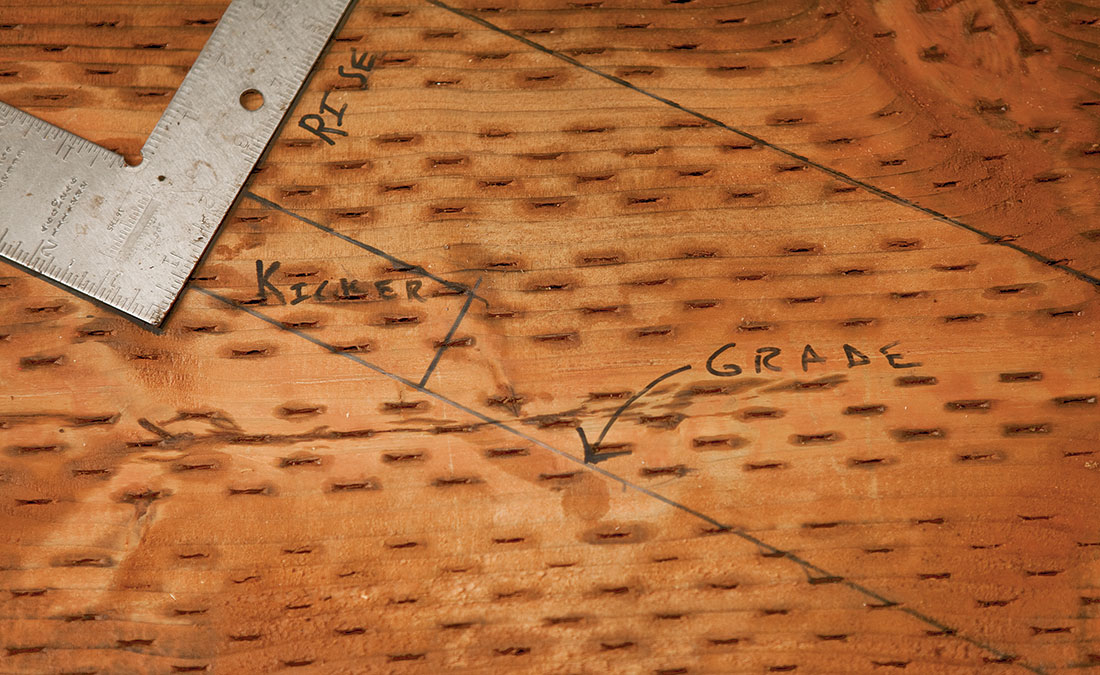 6. Cut the notches with a circular saw, being careful not to overcut the line. 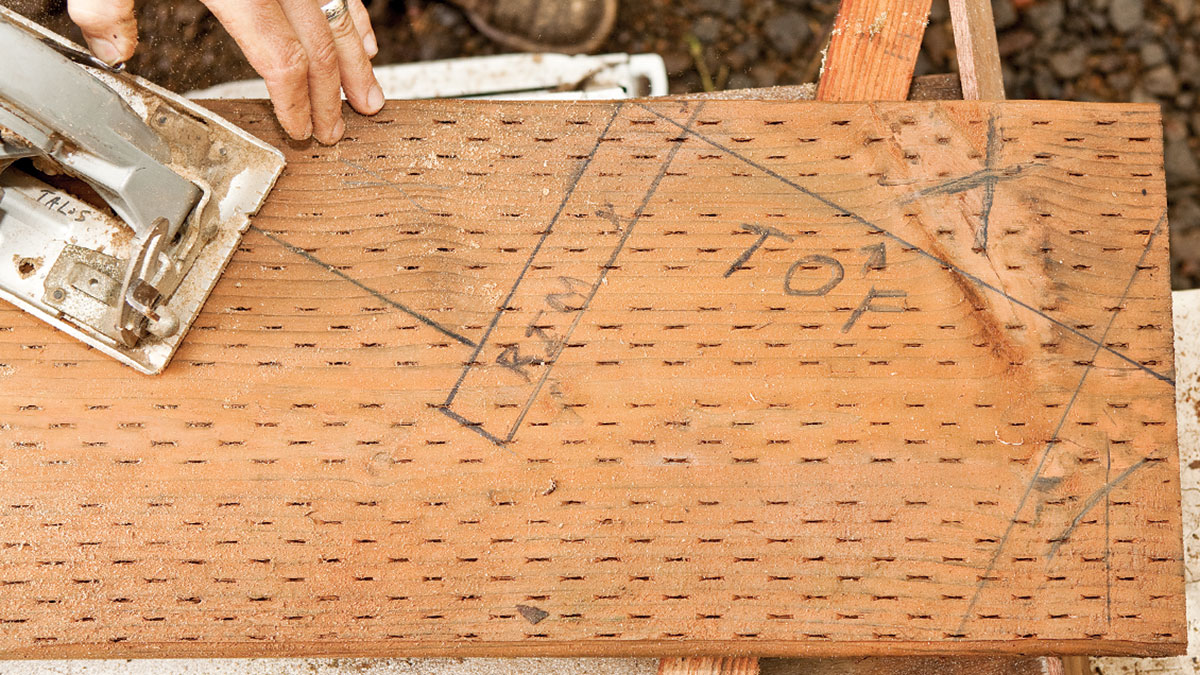 7. Finish the notch cut with a handsaw or jigsaw. 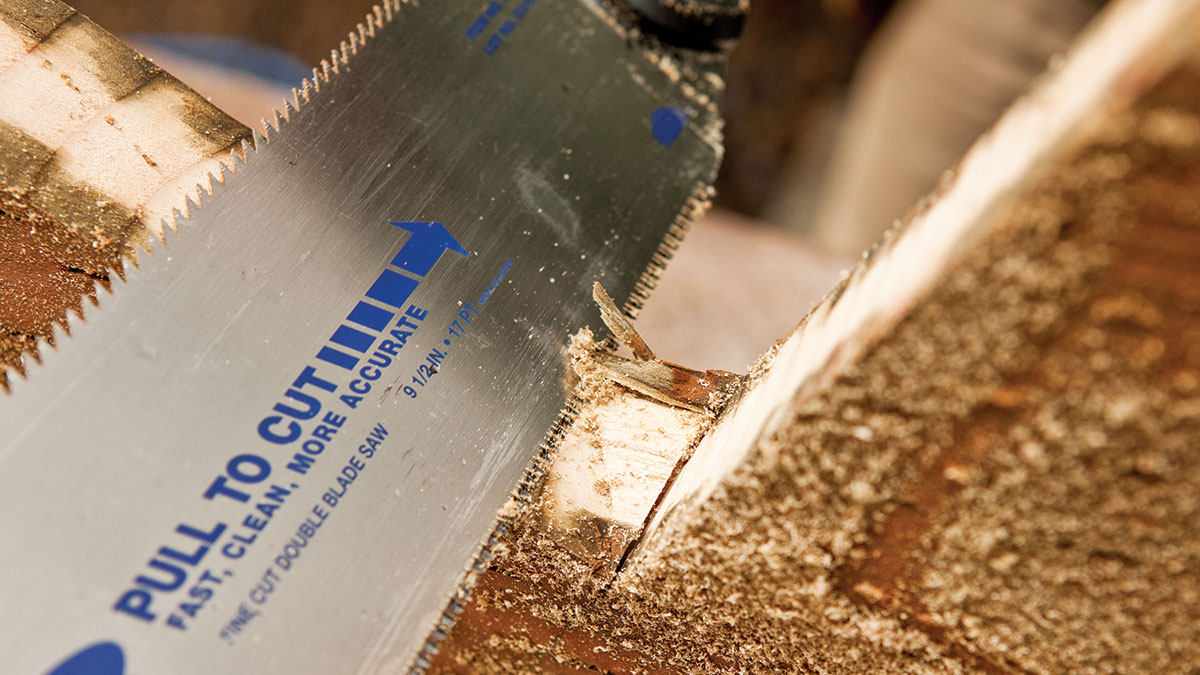 8. Cut inside corners carefully with a jigsaw. 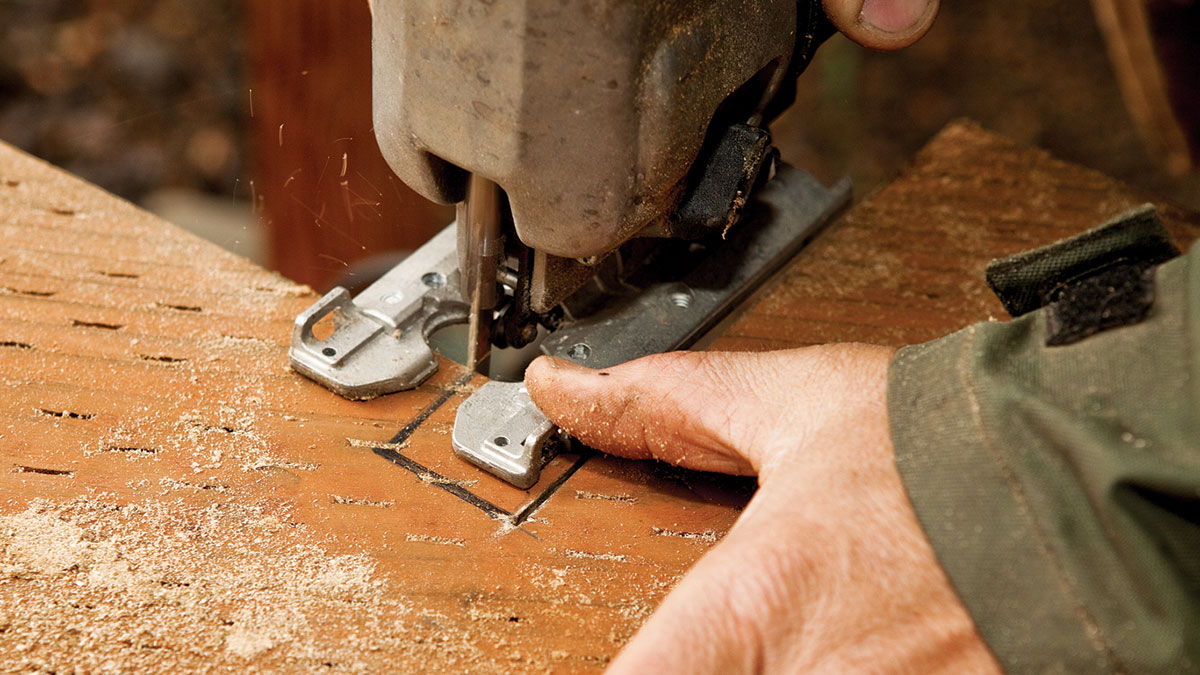 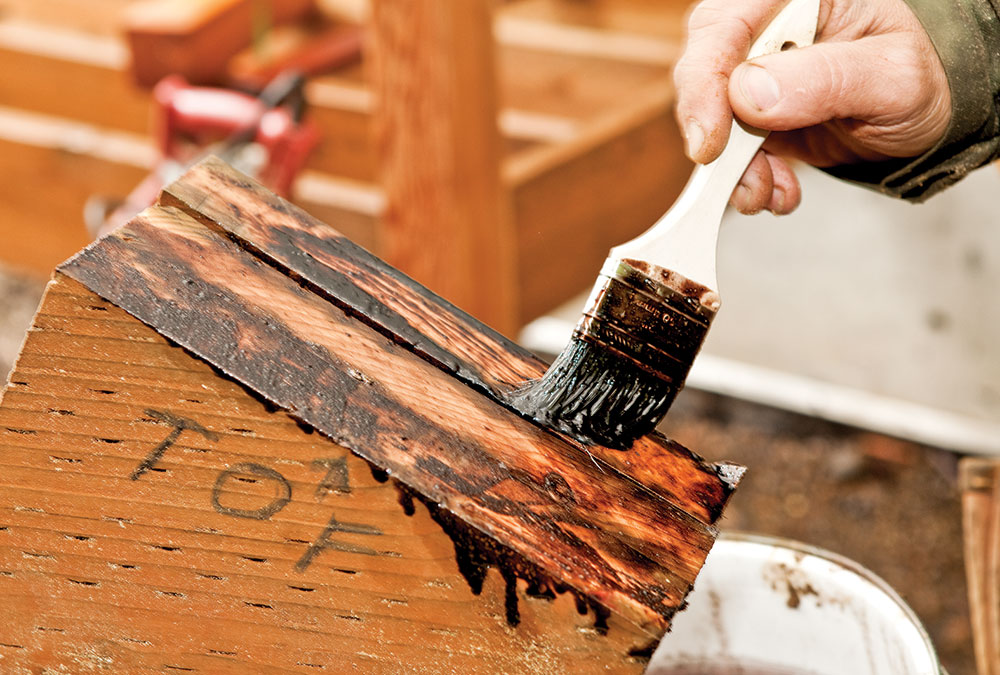