Synopsis: Most deck stairs are cobbled onto the deck as afterthoughts. Veteran carpenter Mike Guertin explains the loads and codes applying to deck-stair connections. He provides a simple and stout detail for attaching the stairs to the deck using readily available metal framing hardware. Guertin also explains how he pours a concrete stair landing pad and how he attaches the bottom of the stairs to that. As a bonus, he details a rock-solid method of attaching the bottom railing posts to the stairs.

On the decks I built in the past, I never gave much thought to how secure the connection was between the stairs and the deck frame. I cobbled together an attachment using whatever was at hand: screws, nails, blocks of wood, and occasionally, angle brackets or field-modified metal hardware. Judging from what I’ve seen of others’ work, I wasn’t alone.

I started taking this connection seriously after seeing that a 1/2-in. gap had developed between the stringers and the frame on an older deck I was examining. Years of use, seasonal expansion and contraction of the wood, and frost heave at the bottom of the stairs had worked the nails out of the stringers’ end grain. Now I look at the stringer attachment on every deck I inspect. Rarely are the stairs mounted securely, and many connections are downright scary. Not only is the stringer attachment suspect, but so is the capacity of the deck frame where the stringers mount. Most deck frames are designed for uniform loads, such as people and furniture. Impose a concentrated point load such as a stair without additional support, and you are likely overloading the frame.

Granted, the load is minimal when, for example, there are just two steps from grade to deck, and the risk of injury is pretty low should such a stair fail. But as the distance between the ground and the deck increases, so do the load and the risk. How tall must a set of stairs be before you take the connection seriously? I avoid that question altogether. To ensure that stairs of any size are supported properly, I frame a dedicated support system for the stairs and secure them with hardware specifically designed for stringer attachment. It doesn’t take much more time or material to make a solid, durable stair connection than it does to cobble together a risky one, and no one ever complains when you don’t cut a corner. 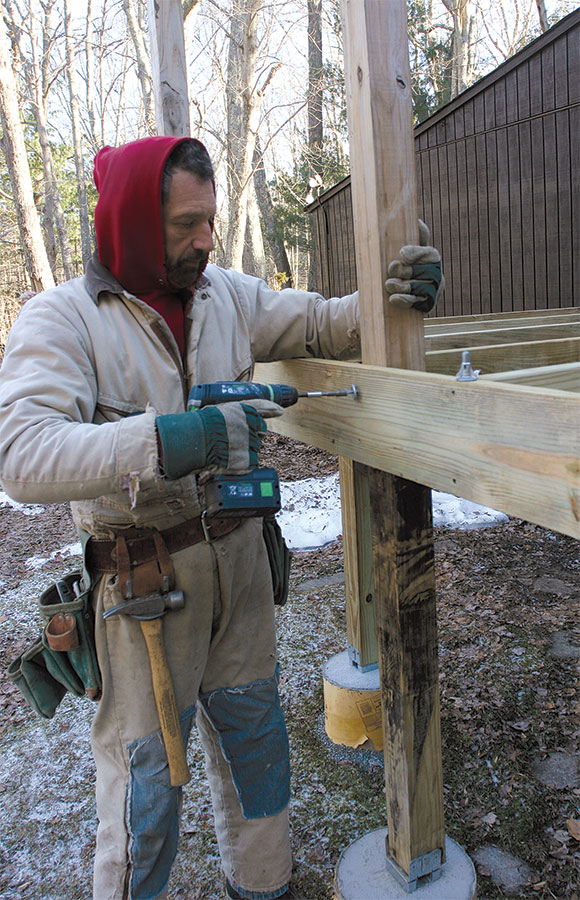 The case for independent

Design loads for stairs parallel those for decks: generally, a combined live and dead load of 50 lb. per sq. ft. Let’s take the example of a set of stairs that’s 3 ft. wide, with eight treads that are 10 in. deep and a rise from grade to deck surface of 5 ft. That’s 20 sq. ft. and a total load of 1000 lb. Half of this load is borne by the footing at the bottom, which leaves a 500-lb. load at the top. Adding that load from the stairs to an end joist sized for the deck load only will overload that joist.

For more photos and details on mounting deck stairs, click the View PDF button below.