Mike Guertin demonstrates his methods for draping EPDM roofing membrane over joists before installing decking to create an affordable system for keeping the space under a deck dry.

When I build a deck with more than 4 ft. of space between the framing and the grade, I install an underdeck-drainage system. Consisting of a membrane installed under the decking, the system collects and channels water into a perimeter gutter system and away from the building. The area beneath the deck is kept dry and can be used for storage or, with enough headroom, a covered patio.

Several commercial underdeck-drainage systems are available for installation during deck construction or as a retrofit. I prefer to fabricate my own system from EPDM rubber-roof material and an aluminum gutter. It’s relatively fast and easy to install before the decking is laid, and this method costs less than commercial systems.

EPDM (ethylene propylene diene monomer) rubber is a roofing material used on flat and low-slope roofs. It’s available from roofing-supply houses in two standard thicknesses, 0.045 in. and 0.060 in., and in 10-ft.- or 20-ft.-wide rolls 50 ft. to 100 ft. in length. I usually use the thicker material, thinner grade works fine for this application. When working alone, I find 10-ft.-wide rolls easier to handle.

Before the layout, gauge the droop. The easiest way to estimate the amount of membrane needed is to make a gauge from a piece of rope or a strip of EPDM. Hold the piece across a joist bay, and slide one end inward until you reach the target droop in the middle. Mark the gauge at the center of the joists and measure. To estimate the material at the shallow end, repeat the process at the opposite end of the joist bay.

Chalklines make layout easy. Because of the graduated swale of the membrane between the joists, each piece of membrane must be fan-shaped. Start by finding the center of the sheet at each end; this locates the center joist in the series. Step off the head measurement along one end of the sheet on each side of the center mark and again along the gutter end. (If you’re marking out more than two or three pieces of membrane with the same joist spacing and membrane droop, make story poles for each end of the sheets.) Snap chalklines between the marks at the head and foot of the sheet. Trim off the excess membrane along the edges, leaving about 3 in. beyond the last joist line. The EPDM strips can be saved and used as sleeper cushions for decks over flat roofs. 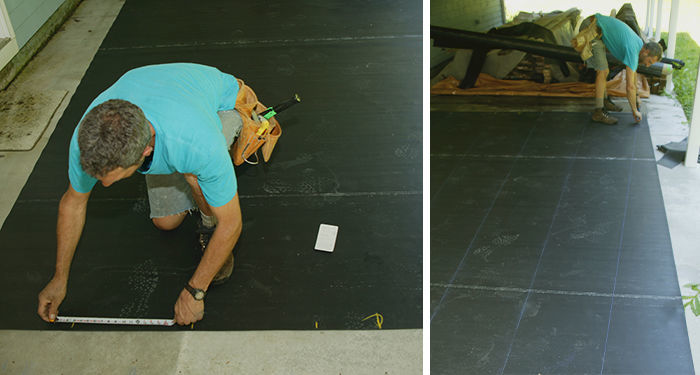 Start with a plan to drain the water

Working backward, it’s best to figure out where the water will go before engineering the membrane. A standard aluminum gutter is a cost-effective, simple solution. On this project, I located the gutter along the outer perimeter, beneath the joists. I design decks with an integral rim beam made of double 2x12s with the floor joists (typically 2×8) flush with the beam top. This leaves enough of the beam hanging below the joists to hide all or part of the gutter. Alternatively, an extra-wide trim board that conceals the bottom edge of the rim board will also hide the gutter on decks that have a flush rim beam or cantilever over a beam.

Before launching into a project, it’s a good idea to identify the type of decking that will be used. Some plastic and composite decking brands require a minimum ventilation area beneath the boards. Check with the manufacturer’s requirements when selecting decking to see if underdeck-drainage systems are permitted.

Roll out and staple. Align the centerline of the sheet with the center joist of the area it covers. Let about an inch of the sheet run up the wall. Staple the sheet every 12 in. along the joist with hammer-tacker staples. The staples need to hold the sheet only temporarily until the decking goes down. Leave the last foot of the sheet at the gutter end loose for trimming later. Shift the sheet sideways to align the next chalkline with the center of the adjacent joist, and staple it down. Continue until you reach the last joist on both sides. 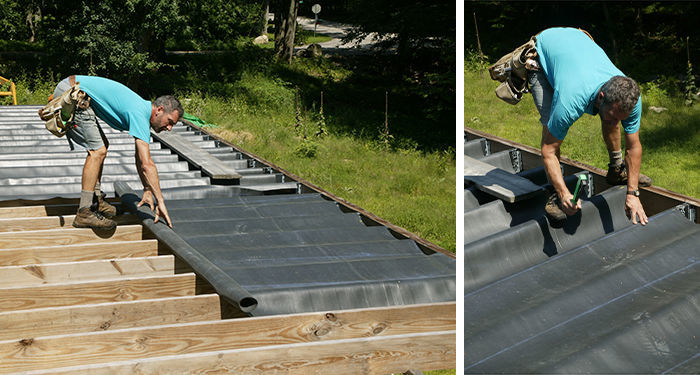 Determine the slope of the membrane

To drain the water toward the gutter, I create a graduated swale in the membrane between the joists that drains the water into the gutter. The swale is tighter at the house, about 1 in. to 11⁄2 in. of droop at the head of the joist bays and a droop 1⁄2 in. shy of the full joist depth at the gutter end.

The trick here is an accurate layout of the membrane. Because of the graduated swale between joists, each piece of membrane must be cut into a fan shape. To account for the distortion created by the swale, I add an extra 8 in. to the length of the membrane for decks built of 2×6 and 2×8 joists and 12 in. for decks framed with 2×10 and 2×12 joists. Each 10-ft.-wide sheet will span four 16-in.-oncenter bays and cross five joists.

Clean it up. Trim off the excess membrane along the last joist, the gutter, and the house. 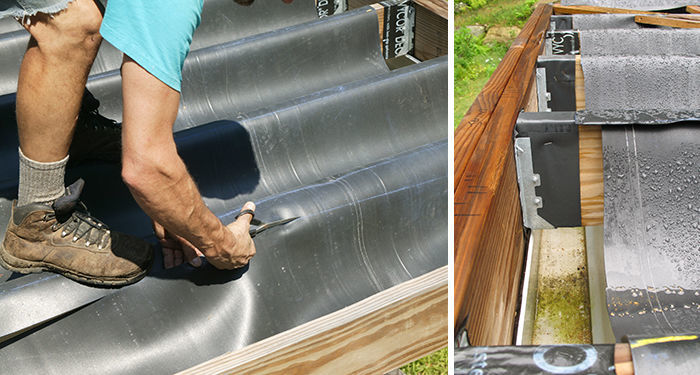 Leave about 1 in. of overlap into the gutter and over the siding, respectively.

Flash at the house. Lap siding makes flashing the underdeck-drainage system easy. Bend a piece of metal or vinyl flashing to slip under a butt joint and over the membrane by several inches. When it’s time to install the decking, first lay strips of cedar shingles on top of each joist to create a drainage space over the flashing. Any water collected by the flashing can then drain onto the membrane instead of being trapped between the decking and the flashing.

A ceiling is better than bare joists. Finish the underside of the deck when the area will be used as outdoor-living space. The beam and gutter get wrapped first with aluminum or vinyl coil stock for a clean look. The joists are covered with vinyl soffit stapled into place. Tongue-and- groove boards or plywood also can be used.

EPDM roofing has a 20- to 30-year or longer life span when exposed on a flat roof.Given that the decking shades the EPDM, I’m hoping for a 75-year-plus life. Don’t expect to get away without any maintenance, though. Leaves and debris will inevitably get between the deck boards. Chances are that regular rain will flush everything clean. However, plan access points for periodic washing. If you nail down deck boards or use a hidden-fastener system, consider screwing one course of decking near the house side and another course close to the outside edge of the deck. The screwed boards can be removed so that the drainage system can be hosed out and the gutter cleaned.

Photos by Charles Bickford, except where noted