Replacing PVC With an EPDM Membrane on a Flat Roof

The PVC roof on my clients’ midcentury-modern home was decades old and well past its useful life. The patches that seal the fasteners were split and part of a system abandoned by its manufacturer years ago. The homeowners had a local roofer attempt to fix the leaking fastener patches with a fluid-applied waterproofing, but when this didn’t stop the leaks, they began to do their own research and contacted Carlisle, a commercial roofing manufacturer. As one of their premier installers, we were put in touch.

I met with the homeowners and reviewed the condition of the roof. The existing PVC was in such bad condition—and the underlying insulation and original roof were so wet—that the existing roof had to be removed, and we replaced it with an EPDM (ethylene propylene diene monomer, a type of synthetic rubber) membrane roof. The process involved hundreds of hours and several days of work, but the end result is a roof finally suited for home’s modern architecture and ready to stand up to the elements.

Off with the old

The existing roof had two roofing systems on top of the sheathing. First was the original hot-mopped asphalt roof. On top of that was a PVC membrane roof, likely added when the original roof started to leak. Under the hot-mop roof was a layer of wood-fiber insulation. Under the PVC was a layer of Perlite insulation. It all added up to 210 yards of debris that we tossed into seven 30-yard dumpsters.

Membrane roofs are almost always installed over a continuous insulation layer. Combined with the 6-in. batts in the rafters, the roughly R-8 polyiso layer will make this roof R-28. The clients opted not to spend more for additional insulation. The EPDM rubber membrane is glued to the insulation and is completely watertight when complete—unlike an asphalt-shingle roof, which is described by roofers as “water-shedding.”

The edges of this low-slope roof have a detail common to commercial roofs—a two-part edge metal with an extruded aluminum cleat and a powder-coated cover; this one is Anchor-Tite by Metal-Era. The metal keeps the roof edges from lifting in high winds. The manufacturer provides several options that can be used with different thicknesses and types of roofing.

The trickiest part of this roof was the existing Yankee gutter. It was 128 ft. long, starting on the home’s north side and curving to the front, over the front entrance. It had 3500 sq. ft. of roof draining into a 2-in.-deep trough framed into the roof, providing a volume of about 10 cu. ft., and it would overflow almost every time it rained. A roof this size really needs a gutter with several times the volume. With both a hanging box and a K-style gutter as aesthetic nonstarters given the home’s architecture, we raised the roof edge, filled in the old system, and designed a much larger gutter that won’t overflow, even with heavy rain.

Metal-Era’s Eliminailer-T is an extruded aluminum angle commonly used to replace wood blocking on the edge of flat roofs. It’s designed to accommodate 5.2 in. of insulation (R-30), which is local code for flat roofs on commercial buildings. In this case, we did not put any insulation behind the Eliminailer, so it projected 5.2 in. above the finished roof. We sealed the Eliminailer with EPDM and detailed it into a watertight dam that holds the water until it drains into the downspouts. 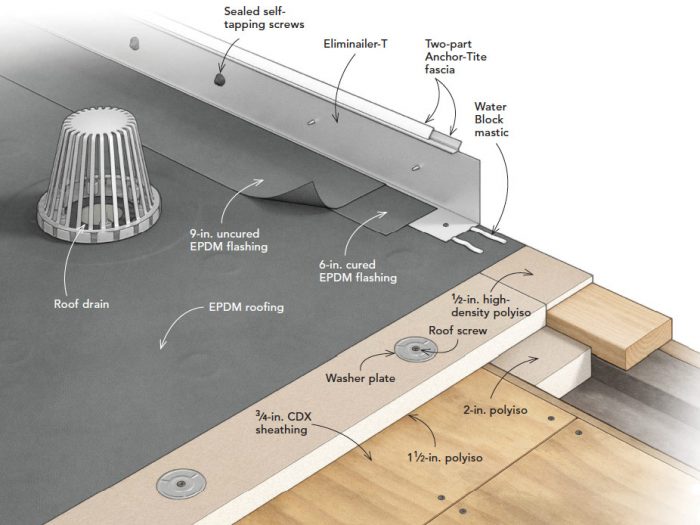 Commercial roofing systems have tested methods for sealing common roof penetrations like pipes, ducts, chimneys, and skylights. In addition to multiple skylights—including a 6-ft. round one—this roof had plumbing and mechanical penetrations and an 8-ft.-wide masonry chimney with leaky flashing. Methods vary for dealing with penetrations, but a skilled roofer should be able to solve most problems with tested assemblies. Detail drawings are often available from the roofing manufacturer.