Site-built deck rails use unconventional materials to preserve the view.

Synopsis: Factory-built deck-rail systems are available at home centers, but there are advantages to custom designs: They can be cheaper, they can display craft and skill, and they can reflect a homeowner’s taste and style perfectly. Managing editor Debra Judge Silber looks at two custom deck railings, one by Maryland builder Clemens Jellema and one from North Carolina builder Michael Chandler. Jellema’s deck has nautical features, such as a top rail wrapped with marine-grade roping, and tempered-glass balusters that allow views to the nearby woods and river. Chandler’s design features agricultural wire (“goat panels”) instead of traditional balusters and rope lights tucked under the top rails.

While there’s no shortage of off-the-shelf railing systems from decking manufacturers, there still can be advantages to building your own system. Cost is one. Craft is another. Still another is the ability to deliver a unique outdoor feature that fits a client’s desires and a deck’s design perfectly. “It’s a lot more fun to play with different ideas and to create something that’s more than the sum of its parts,” says North Carolina builder Michael Chandler, who incorporated agricultural panels and coil stock in his railing. “There’s an alchemy in taking something very prosaic, like galvanized flashing and goat wire, and turning it into something that’s high value and more attractive than premade cast-aluminium stuff.” 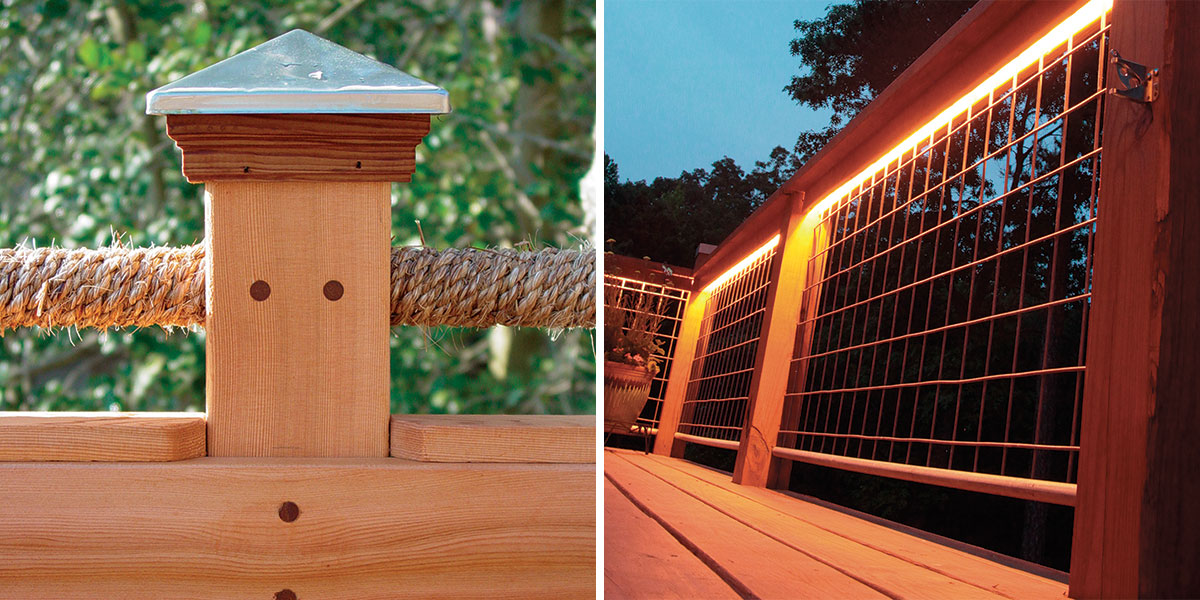 Maryland deck builder Clemens Jellema used two types of manufactured balusters in the railing he designed for a home near the Chesapeake bay, but he supported them in a cedar framework detailed with ipé plugs and a rope-wound top rail. In Jellema’s case, with the high labor costs associated with a metropolitan area, it pays to incorporate some ready-made components.

If you’re inspired by these designs to create your own answer to run-of-the-mill deck rails, we invite you to post photos of your work in our project gallery at FineHomebuilding.com. Consider yourself warned that we’ll be on the lookout for creative deck accessories to feature in our next Decks & Outdoor Projects special issue. And please keep in mind that although the railings shown here meet the code requirements for their jurisdictions, regulations vary, so check the codes in your area. 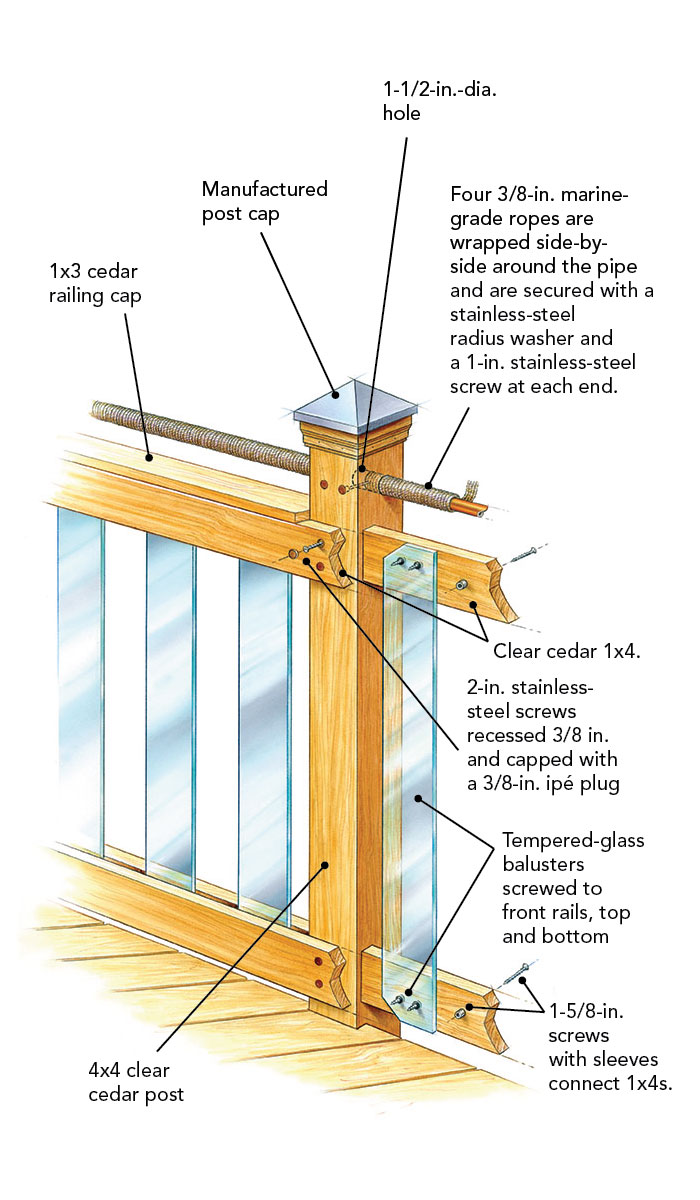 Maryland deck builder Clemens Jellema produced this design for a client who wanted a rail with nautical features that wouldn’t obscure his view of the nearby woods and river. Jellema achieved the shipshape appearance with a top rail of 1-in. copper pipe wrapped with marine-grade roping. To preserve the view, he chose tempered-glass balusters from Deckorators. For the stair rails and deck sections facing the yard, he used the company’s stainless aluminium balusters and connectors. In those sections, a single cedar 2×4 was used for each top and bottom rail.

Materials for the glass sections totaled about $50 per lin. ft. (compared to about $42 for the aluminum sections). In both cases, the option of using balusters from a manufacturer outweighed the labor cost of fabricating them. Jellema also estimates the choice of clear cedar rather than STK (select tight knot) added about $6 to $8 per lin. ft. 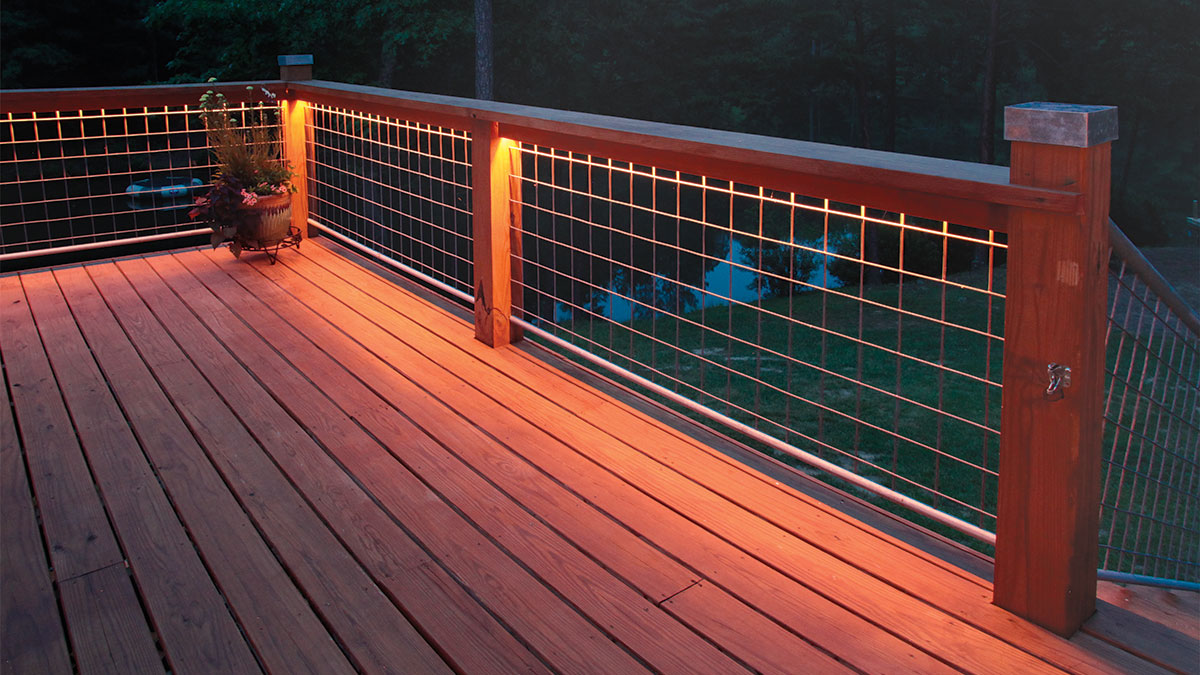 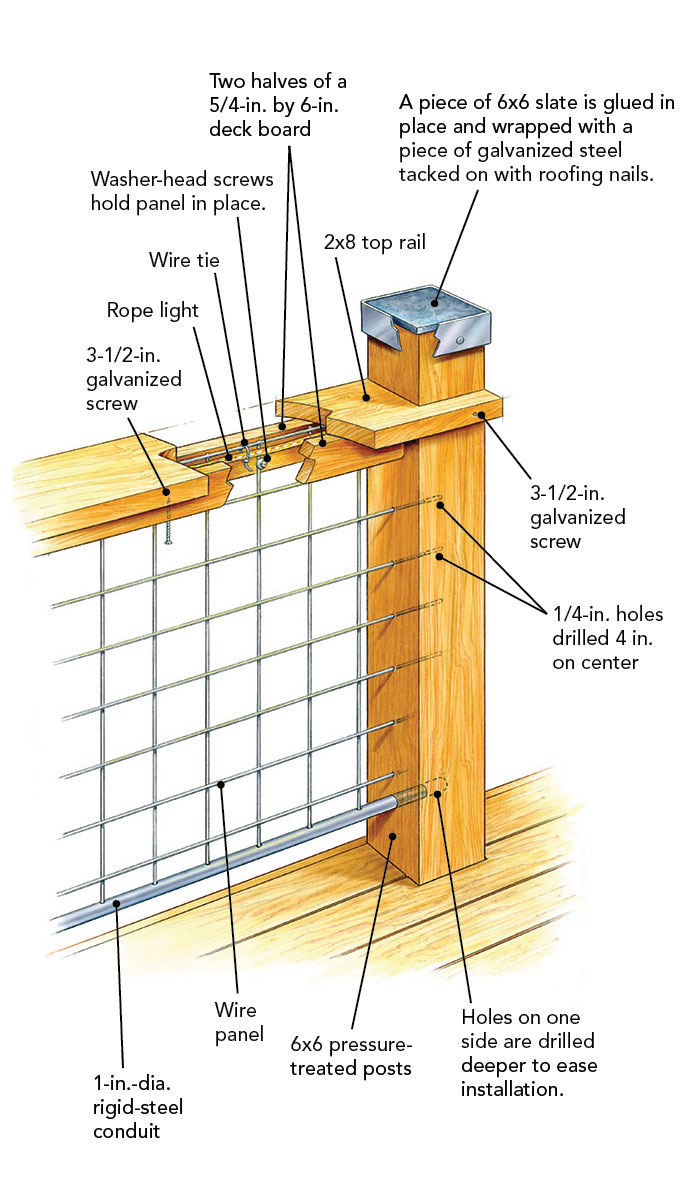 Wire panels for a wide-open view

When budget concerns arose, North Carolina builder Michael Chandler corralled the cost of this 600-sq.-ft. deck project by using agricultural wire goat panels for the guardrails rather than the custom metalwork initially planned. The panels are made of 7/32-in.-dia. wire in a 4-in. grid pattern that’s stiff enough to stand in for traditional balusters. The ends of each panel are inserted in holes drilled into the posts or, along the bottom, in a 1-in.-dia. rigid-steel conduit that serves as the bottom rail. Rope lights tucked under the top rails provide illumination.

Materials for the horizontal sections, including the rope light, totaled about $10 per lin. ft. Also known as “feedlot panels,” the wire sections used in this railing are available from agricultural suppliers in 16-ft. by 4-ft. sections for less than $50 apiece.