How Far Can a Deck Beam Span?

Use the 2018 IRC to size deck beams and calculate beam span.

Sizing deck beams got a lot easier with the publication of the 2015 International Residential Code. Deck builders can now refer to Section R507.6 Deck Beams and Table R507.6 Deck Beam Span Lengths to determine the size of 2-ply and 3-ply built-up beams made from 2×6 through 2×12 lumber. These values didn’t change in the 2018 version of the IRC. (For more on other aspects of framing an elevated deck, have a look at this guide.) 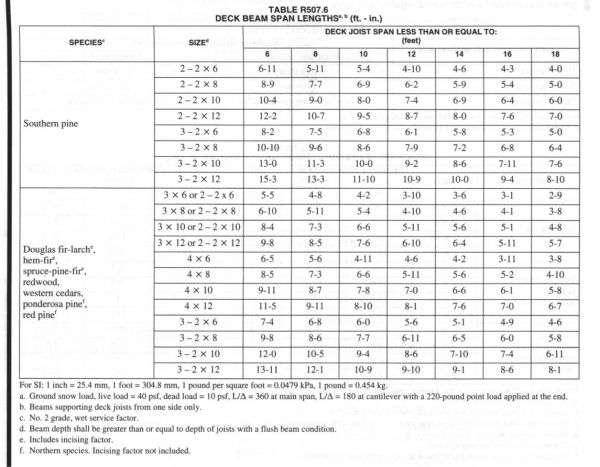 The beam spans are based on the span of the deck joists, which are listed in 2 ft. increments from 6 ft. through 18 ft. Although the practice is common, there’s no allowance for interpolating beam spans when the joist length you’re dealing with isn’t listed in the table. For example, a double 2×8 beam can span 8-ft.-0 in. when the deck joists are 6 ft. long. When the deck joists are 8 ft. long, the beam can span 7-7. When building a deck with 7-ft. joists, you know the beam can span somewhere between 7-7 and 8-0, but you don’t know exactly where. Check with your local code official, or simply drop back to the shorter value in the table and assume the allowable span is 7-7.

Section R507.6 calls for the built-up beams to be fastened together with a minimum of 10d nails spaced 16 in. on-center along both edges. Joints in beam layers must fall over posts.

Beams are permitted to cantilever past the end posts up to one-quarter of the beam span between posts. I like to use this provision when sizing beams. Often I can reduce the span between posts slightly by cantilevering the beam. This allows me to make the beam a little smaller (by dropping, say, from a double 2×10 to a double 2-2×8). Beam span and cantilever measurements are taken from the center of the posts, not the face of the posts.

There are other beam provisions and limitations in the 2015 IRC to take note of:

Even if your local code jurisdiction hasn’t adopted the 2015 IRC, most building officials will look favorably on an ICC sanctioned code provision.  So run the table by your building official for approval before using it.

Previous: Build a Grade-Level Deck: Install Posts and Rim Beam Next: How to Accurately Cut a 6×6